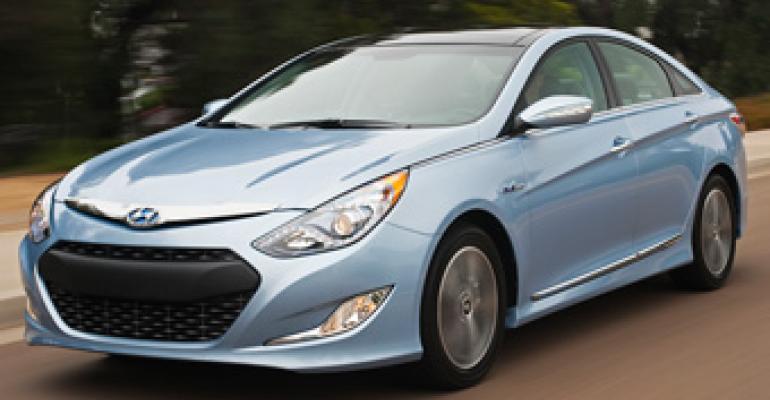 In fiscal 2010, Toyota and Honda accounted for 95% of global hybrid sales and 90% of hybrid and EV deliveries combined. TOKYO – Analysts’ expectations that 2011 would be the coming-out year for electric vehicles and next-generation hybrids are proving to be overly optimistic.

Sales have underperformed in the wake of a series of external factors, including the massive earthquake and tsunami in Japan last spring that shut down and slowed vehicle production for nearly three months, a record strong yen and weak U.S. and European economies.

“The market can’t grow without substantial subsidization,” Takahashi says. “Unfortunately, this comes at a time when most of the industrialized world is faced with having to reduce government spending to bring long-term debt under control.”

The Sonata and Civic models, both launched at the New York Auto Show in April, are the first mass-market hybrids to use lithium-ion batteries. Mercedes-Benz’s luxury S400 Hybrid, on the market since August 2009, also employs Li-ion.

Since the Sonata Hybrid’s North American launch, sales of the car have averaged 1,400 units per month, putting it on track to reach 17,000 by spring. In South Korea, where the car went on sale in May, Hyundai sold 5,479 units through October. It plans to deliver 18,000 over a 12-month period.

Meanwhile, Hyundai affiliate Kia introduced the Optima Hybrid in July. Sales in the first five months reached 6,065 units, including 3,986 in South Korea and 2,079 in the U.S. and Canada. The auto maker declined to disclose 2011 sales targets.

While the Sonata Hybrid has been doing more than well, the Nissan Leaf, Chevrolet Volt and Honda Civic Hybrid have struggled. So, too, has Mitsubishi Motors’ i-MiEV electric car.

Leaf sales remain less than 18,000 units globally after 10 months on the market, and deliveries total just 12,000 since the start of the Japanese fiscal year in April. While analysts do not consider these poor results, it is well below Nissan’s first-year production target of 50,000 units.

The Volt has fared even worse, with U.S. sales through October totaling 5,003, according to WardsAuto data, a showing General Motors has blamed on supply shortages. GM’s Volt sales target is 16,000 units in 2011, including exports, and 45,000 in 2012.

Honda has sold fewer than 3,500 Civic Hybrids since the car’s April launch, while Mitsubishi has delivered just 6,061 i-MiEVs between April and October. Mitsubishi’s fiscal 2011 sales target is 25,000. In its defense, i-MiEV production was suspended for two months following the March 11 earthquake and tsunami.

Even if Mitsubishi, Nissan and GM were to meet their near-term targets, it is unlikely they would significantly impact the market overall, which is dominated by conventional hybrids and two brands, Toyota and Honda.

In fiscal 2010, Toyota and Honda accounted for 95% of global hybrid sales and 90% of hybrid and EV deliveries combined. They are likely to maintain their industry-leading positions until at least the end of the decade, although their shares gradually will decline as new entries come into the market.

Although Toyota’s hybrid sales are off nearly 30% from last year’s record pace, they are recovering rapidly and rebounded to 66,000 units in September. In fiscal 2010, the auto maker sold 670,388 hybrids, of which all but 600 plug-in Priuses employed the auto maker’s conventional 2-motor system with a nickel-metal-hydride battery.

Toyota currently sells 12 main hybrid models, including five through its Lexus channel. The auto maker plans to add six all-new or revamped models by the end of fiscal 2012 and forecasts hybrids to account for 30% of its global sales in 2020.

The Prius V wagon now is hitting U.S. dealer showrooms, after its planned April launch was delayed by the earthquake and tsunami. The Camry Hybrid went on sale in mid-November. The Prius C and plug-in Prius will be available in spring 2012.

Although Toyota has been cool toward EVs, it will launch an electric iQ and RAV4 in fiscal 2012. Both models will be sold in the U.S., the iQ EV through Toyota’s Scion channel and limited to fleet customers, and the RAV4 EV available only in California.

For plug-in hybrids and EVs, Toyota will adopt Li-ion batteries. The 7-seat version of the Prius V, which won’t be sold in the U.S., also will be fitted with a Li-ion battery in order to create space for the third row of seats.

Honda sold 170,026 hybrids in fiscal 2010. Included in its lineup were the Insight, CR-V, Fit Hybrid and previous-generation Civic Hybrid. All Honda hybrids employ a single-motor system and, with the exception of the new Civic, a NiMH battery. The auto maker expects 20% of 2020 sales to be hybrids.

In Japan, Honda is testing 10 Fit EVs and 20 EV-neo scooters in Saitama and Kumamoto prefectures. It plans to add 10 plug-in Inspires by next summer. All four test models are powered by Li-ion batteries. Honda plans to launch the Fit EV in 2012.

In the plug-in hybrid/EV segment, Hyundai currently is fleet-testing 280 BlueOn EVs in South Korea and reportedly has a Santa Fe plug-in hybrid under development. Kia, likewise, is developing a Venga EV and Ray plug-in hybrid. No launch date has been announced for any of these models. Kia will join in the fleet test program in 2012.

Hyundai recently confirmed it would mass produce an electric car from early 2014 and that the model will not be the limited-production BlueOn EV. Management plans to begin domestic sales of the new model late this year and sell 2,000 units by the end of 2013. The following year, when exports get under way, it hopes to boost yearly sales to 20,000 units.

Mazda will offer a battery-powered Demio next year and introduce a 2-motor hybrid in Japan by way of a technical tie-up with Toyota in 2012.

Suzuki plans to roll out a plug-in version of the 0.66L Swift minicar in 2013, while Fuji Heavy Industries (maker of Subaru cars) is working on hybrid development with Toyota, its largest shareholder.

China remains a wild card. The government clearly is backing a move into electrification, having committed RMB100 million ($15.7 billion) over the next 10 years with a substantial portion going to infrastructure. Still, it is not clear whether Chinese consumers will be able to afford electric cars even with government support.

Even so, all major Chinese auto makers are developing product, both EVs and hybrids, including FAW Group, SAIC, Chang’an and Chery.

BYD, one of China’s most-watched auto makers because of its Li-ion battery technology, reportedly has deployed 50 e6 electric cars in taxi service in Shenzhen, its home base in Guangdong province, and 200 e-BUS electric buses.

In mid-September, Nissan received Chinese government approval to export the Leaf to China. Analysts predict the auto maker eventually will build the car there. Already Toyota, by way of Guangzhou-based GAC Toyota, is assembling Camry Hybrids in the country, while Beijing Hyundai reportedly plans produce an electric car in 2012.

In North America, GM, which sold an estimated 10,380 hybrid SUVs and trucks in 2010, will add a pair of mild hybrid sedans in December. The Buick LaCrosse and Regal will be followed by the Chevrolet Malibu Eco in 2012. The three models will adopt the auto maker’s eAssist system with Li-ion batteries.

GM’s Opel/Vauxhall European brands will launch a Volt derivative, the Ampera, by the end of this year.

Ford, the world’s third-largest producer of hybrid vehicles, plans to start rolling out its new EV and plug-in hybrid lineup in December, beginning with the Focus Electric EV, followed by the C-Max Energi and C-Max Hybrid in 2012.

All three models, plus the limited-production Transit Connect van, will employ Li-ion batteries. The Transit Connect went on sale in April in the U.S. and in June in Europe.

Chrysler, a latecomer to the segment, plans to launch the Fiat 500 EV late next year. The auto maker currently is fleet-testing a Ram plug-in hybrid pickup.

The European market essentially is in startup mode.

Mercedes-Benz says that by the end of 2011 it will have more than 3,000 electric cars in operation, mostly Smart Fortwo EVs involved in fleet tests in Europe, North America and Asia. The auto maker further reports its S400 Hybrid accounts for more than 10% of global S-Class sales.

New models planned for 2012 and 2013 include a diesel hybrid and the SLS AMG E-Cell, a battery-powered sports car that debuted last January at the Detroit auto show.

Like Mercedes, BMW is conducting fleet tests of its Mini E and Active E electric cars. In 2009, the performance-car maker introduced the small-volume X6 Hybrid. Then in 2010, it launched the Active Hybrid 7. Under development are the Megacity, both a plug-in hybrid and EV versions, and the i3, successor to the Mini E and Active E.

Audi’s Q5 hybrid is scheduled to go on sale later this year and will be followed by the A6 and A8 hybrids in 2012. Unlike the Touareg and Cayenne S hybrids, Audi’s hybrids will employ Li-ion batteries.

Volkswagen reportedly will launch the e-Up EV in 2013. The model will be fitted with a Li-ion battery. Also under development is a diesel plug-in hybrid and battery-powered Golf Blue-e-motion.

Renault, working with Nissan, began rolling out its EV lineup in October with the Kangoo Z.E. and Fluence Z.E. Following in 2012 will be the Twizy Z.E. 2-seater and mass-market Zoe Z.E. All four vehicles will be equipped with Li-ion batteries.

PSA Peugeot Citroen, teaming with Mitsubishi, will introduce electric versions of the Citroen Berlingo and Peugeot Partner in 2012. PSA currently sells versions of Mitsubishi’s i-MiEV as the Peugeot iOn and Citroen C-Zero in Europe. The auto maker reportedly plans to sell 100,000 EVs between 2011 and 2015.

How will these many model programs fare?

Goldman Sachs Japan, in one of the industry’s more bullish forecasts, predicts demand for hybrids and EVs will grow to 13.9 million units out of total vehicle sales approaching 110 million.

Reality probably lies somewhere in between.