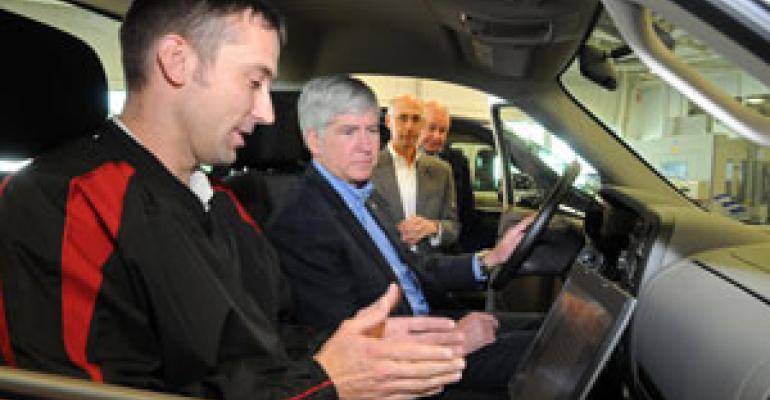 After enduring painful downsizing and the Delphi bankruptcy, Nexteer&#8217;s Saginaw operations have gone from famine to feast in a few short years. The company is turning away business frequently. SAGINAW, MI – With an investment of $150 million, Nexteer Automotive is positioning its massive manufacturing complex here to capitalize on the North American industry’s migration from hydraulic to electric power steering.

Europe has led the transition to EPS over the past decade because the on-demand system can reduce fuel consumption 3%-4% when compared with conventional hydraulic power steering, which runs off a pump connected to the engine and is active as long as the vehicle is running.

EPS, on the other hand, draws power only when the driver turns the wheel.

Much of the plant remodeling will focus on launching EPS for General Motors’ next-generation fullsize pickups and SUVs, slated for production next year. This program, alone, will retain 1,000 jobs here, the supplier says.

Protecting jobs has been a sore subject here in central Michigan and in particular at this plant, the second-largest employer in Saginaw County.

Twenty years ago, when the plant belonged to GM, it employed about 10,000 people. It became part of Delphi when GM spun off its parts-making operations in 1999. Delphi went bankrupt in 2005, and in 2009 GM took back the steering business to ensure steady supply of product and to find a new owner.

By that time, employment at the Saginaw facilities had fallen to 3,080 people.

Chinese-based Pacific Century Motors acquired Nexteer in July 2010 and since then has added 700 hourly workers and 100 salaried technicians and engineers to keep up with new contracts, says Dennis Hoeg, vice president-global engineering.

“We need about another 100 strong engineering types, with more of an electrical focus,” Hoeg says. He hopes to hire 30 of those by the end of this year.

“We’re over our heads in terms of the work that has to be done on customer timelines. It won’t always be like this,” Richardson tells WardsAuto. “We can’t find enough good electrical and software engineers. We didn’t really need any 15 years ago. But we’re writing our own code now; we’re not dependent on anyone else.”

Now a $2.2 billion company, Nexteer sees EPS as the future. But what if a customer approaches Saginaw with potential business for hydraulic steering for something other than a heavy-duty pickup?

“We’d turn them down,” Richardson says. “We have nothing more to learn about hydraulic steering in North America. We’re ready to go e-steer across the board.”

Richardson says Nexteer stacks up well to the competition in terms of steering feel, value and quality.

“We can’t grow any faster than we are right now,” he says, adding that Nexteer ranks fourth among seven global players. “We’re turning down business every week to make sure we execute booked business flawlessly.”

Making Nexteer more competitive is a 2-tier wage structure ratified by the United Auto Workers union in July 2010. The starting wage is $12 an hour, and temporary workers given permanent status earn $14.50 for the same job.

By 2015, more than half of Nexteer’s steering business will be dedicated to EPS. Given the growing penetration rate globally, the Saginaw operations are playing catch-up: More than 90% of steering systems produced here currently are hydraulically actuated.

“But we are seeing a complete conversion from hydraulic steering to EPS,” Nexteer President and CEO Robert Remenar tells WardsAuto. “It’s coming very, very fast. The issue is about capacity and how fast people can convert.”

For Remenar, a key event in the market’s development came several years ago when Ford announced 100% of its vehicles would employ EPS. That strategy came to fruition last year when Nexteer began supplying EPS for both the F-150 pickup and Mustang muscle car.

A decade ago, EPS systems were criticized as unrefined, with a driving feel that was numb compared with tried-and-true hydraulic steering.

But three product generations later, the systems are vastly improved, highly tunable and difficult to identify from the driver’s seat. BMW, arguably the benchmark for steering feel, is migrating many of its most popular vehicles to EPS.

“The Mustang is a high-performance vehicle, renowned by auto enthusiasts, and it has to feel right,” Remenar says. “It’s not your everyday driver. Guess what – the reviews have been excellent. That’s our system.”

In North America, EPS represents about 61% of the market, compared with 33% for hydraulic steering, TRW says.

Nexteer has 20 manufacturing plants around the world, and its facility in Poland is a top producer of EPS for small cars such as the Fiat 500.

Plant 3 here has produced more than 300 million hydraulic power-steering pumps since 1953 and soon will be transformed with high-tech machinery to manufacture the supplier’s most advanced EPS.