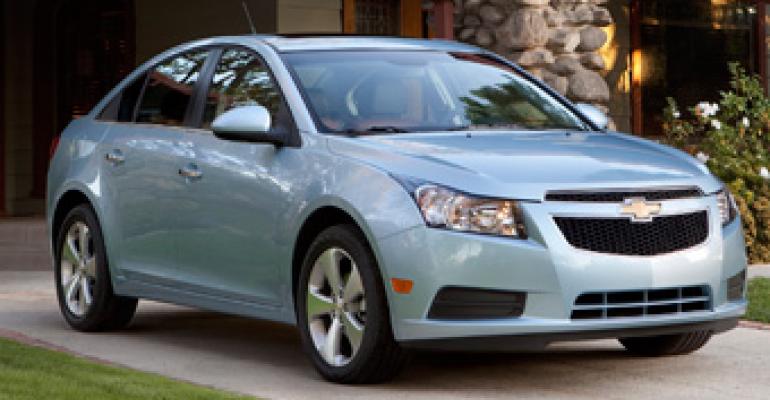 &#8220;There&#8217;s definitely going to be a time when the (Chevrolet) Cruzes of the world are the top-selling cars,&#8221; GM&#8217;s Don Johnson says. Such a move would end midsize-segment dominance that has spanned four decades. The U.S. new-car market is on the cusp of a consumer-preference shift to the compact segment, General Motors’ top sales analysts predicts.

“There’s definitely going to be a time when the (Chevrolet) Cruzes of the world are the top-selling cars in this market,” Don Johnson says. “It could well happen in 2012.”

Such a move would end midsize-segment dominance that has spanned four decades, according to Ward’s data.

The Cruze was the best-selling car in the U.S. in June, but that was not the case in July. Longtime consumer favorite, the midsize Toyota Camry, recorded 27,016 deliveries.

The C-segment Cruze accounted for 24,648 sales – second in the GM portfolio to the Chevrolet Silverado fullsize pickup, the auto maker’s volume flagship and a perennial sales leader in the total U.S. light-vehicle market.

With the average national per-gallon price of regular-grade gasoline trending nearly $1 higher than year-ago at $3.70, according to the American Automobile Assn., consumers are seeking relief by downsizing, Johnson says.

But because of packaging and powertrain innovations that strategy portends less compromise and more benefits than in years past, he adds.

Upper Small Cars last dominated the U.S. car market in the 1980s, according to Ward’s segmentation. Five times during that decade a compact model topped the list of the nation’s best-sellers, with the Ford Escort achieving the feat last in 1988.

Cadillac was the only GM brand that did not achieve positive results in July. Its car sales plunged 21.3%, while its light trucks slid to 23.8%.