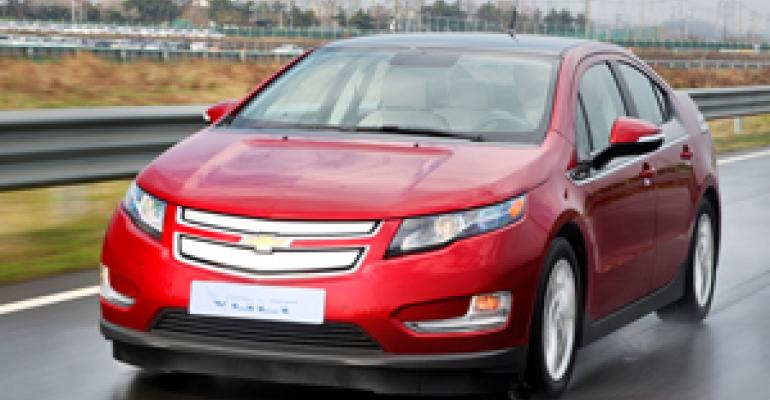 Part of the reason for the low inventories has been GM&#8217;s rule that dealers must carry a demonstration model before they will be allotted a salable unit. GM spokesman Rob Peterson tells WardsAuto the measure solves what the auto maker considers the No.1 issue behind flagging sales of the extended-range electric vehicle – availability.

Landy admitted GM also has held back on marketing the vehicle because it had so few in inventory.

Part of the reason for the low inventories has been GM’s rule that dealers must carry a demonstration model before they will be allotted a salable unit. About 2,200 of Chevy’s 3,000 dealers had at least one demonstration model as of Nov. 1, up from 2,000 a month ago.

GM also kept the vehicle’s initial launch, which dates back some 11 months, to seven select markets before opening it up nationwide earlier this year. That translated into meager monthly sales of a few hundred units.

GM closed October with a stockpile of 3,086 Volts, up from 2,443 in the previous month, according to WardsAuto data. In August, that number stood at 1,316 units and at 226 in July, when a model-year changeover suspended production of the Volt for several weeks.

But with the pipeline apparently filling, the Volt posted its best month in October with 1,108 deliveries. To date, the car has accounted for 5,003 deliveries.

GM executives originally expected 10,000 Volt sales this year, a target that was nowhere in sight before today.

Peterson says hitting the Volt’s sales target was a small consideration to offering the demo units for sale.

“We just really want to get the cars into the hands of consumers,” he says, calling the decision especially timely because many buyers want to take advantage of an available $7,500 federal credit on their 2012 income tax filing instead of waiting another entire year for the money.

Peterson says GM does not expect every dealer to sell their Volt demo. “It’s a good way to keep showroom traffic going, but for others it puts them right in the game.”

GM has made the Volt a cornerstone of its turnaround since the auto maker’s 2009 bankruptcy. It considers the Volt its halo vehicle.

The auto maker also says the Volt spurs sales of other Chevy cars, noting that over the last four months, some 200,000 viewers have clicked from the Volt’s website directly to that of the Chevy Cruze.

For a 6-month stretch this year, the Cruze had been the top-selling compact car in the U.S.

Landy also said many consumers remain unaware of exactly how the Volt works, leading to some buyer uncertainty.

Unlike a hybrid or an all-electric vehicle, the Volt will go between 25 and 50 miles (40-80 km) on electricity before a range-extending internal-combustion engine helps send the car another 300 miles (483 km).