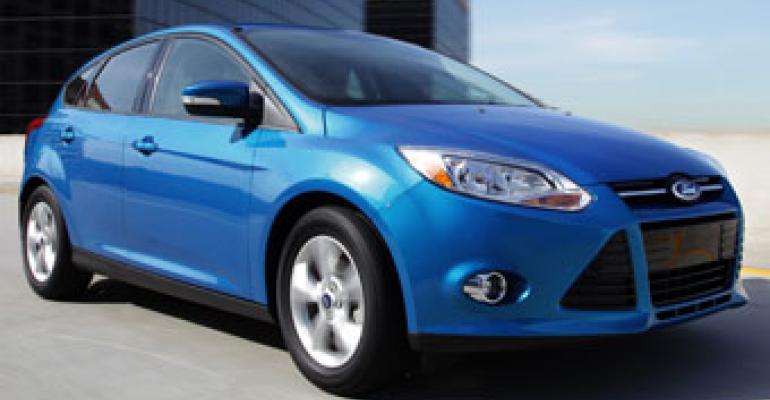 Focus volume, at 14,889 units for July, was down considerably from June&#8217;s 21,385, but company officials say a reported production problem at a related component plant was not a factor in the decline.

July Fiesta deliveries jumped 64.2% on a daily basis vs. year-ago, according to Ward’s data, while Focus sales were flat with like-2010, a condition the auto maker blames on depleted inventories heading into the month, not a lack of demand.

Focus volume, at 14,889 units for July, was down considerably from June’s 21,385, but company officials say a production problem at a related component plant was not a factor in the decline.

Ford reportedly has been having problems with machinery used to cover dashboards for the Focus at a Saline, MI, facility. But George Pipas, the auto maker’s top U.S. sales analyst, says that hiccup did not curtail production of the car itself.

“At dealers, we have 25% of the Focus inventories that we did a year ago,” he says. “The fact sales are down 3% really attests to how fast the car is spinning. There’s no question we’re being pinched by tight inventories.”

“They’re being sold as they drive off the trucks,” he says of the small cars. “We are running flat out at the Focus plant and are doing all we can. We’re fortunate to have a vehicle in hot demand.”

Neither executive would comment on whether the auto maker is considering adding a third shift at the Focus plant in Wayne, MI, or otherwise eying ways to increase production.

The Fiesta also has been a hot seller, Pipas says.

“Demand for Fiesta and Focus both are stronger than expected,” he says, noting they are the two fastest-turning cars in Ford’s lineup.

Small cars are hard to get industry-wide, he adds, with days’ supply running in the 30s, while overall light-vehicle inventories are at about 54 days’ supply.

Trucks accounted for the lion’s share of the auto maker’s mix at 65.8%, and the 15.7% increase in that sector easily outpaced the 7.4% gain on the car side.

Utility vehicles were among the big winners, posting a 43% increase in sales for the Ford brand. Utilities accounted for most of the $200 rise in the industry’s incentive spending in July, Pipas says, likely sparking some of the additional consumer interest.

Lincoln showed a little life, with car sales up 69.6% and truck deliveries climbing 17.6%. Czubay says that reflects Ford’s renewed commitment to the brand, which will result in seven new or refreshed models hitting the market in the next three years, including some products in segments where Lincoln currently doesn’t compete.

Ford says its retail sales were flat with year-ago, while fleet deliveries were up 35%. However, the fleet mix of 31% remained the second-lowest for any month this year.

Pipas says the industry’s estimated seasonally adjusted annual rate of 12.2 million cars and trucks for July indicates the market is ready to inch back upward.