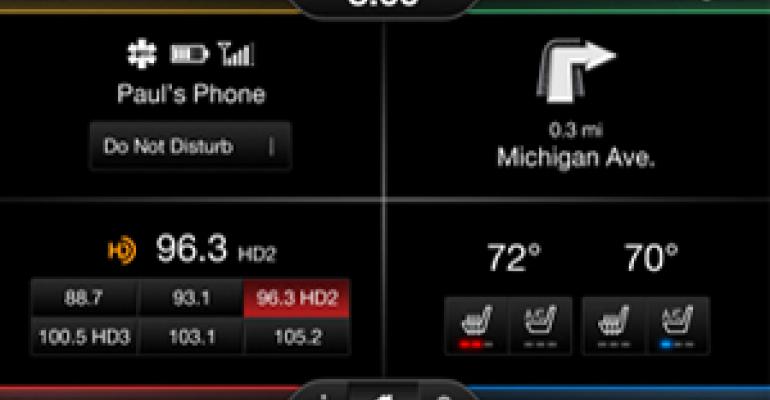 The auto maker knew the system had shortcomings when it launched last year, to the chagrin of critics. But an imminent upgrade is expected to resolve complaints and satisfy detractors. DEARBORN, MI – Ford knew MyFord Touch had shortcomings when the system launched last year, to the chagrin of critics. But an imminent upgrade is expected to resolve grievances and satisfy detractors.

“We’ve gotten feedback from customers and listened to them, and I think we’ve incorporated their thoughts,” says Mark Fields, Ford president-The Americas. “We think we’re taking it to the next level and really giving customers what they really want.”

Ford quality ratings have taken a beating from publications such as Consumer Reports because of complaints the MyFord Touch telematics system is too complicated and prone to crash.

Fields tells WardsAuto he is optimistic the upgrade will reverse those opinions, adding most MyFord Touch users give it thumbs up. Some 50% of Ford buyers cite the system a key factor in their purchase decisions, while 80% recommended it to friends, according to Ford survey data.

However, the auto maker admits the system had shortcomings when it was launched last year.

“We knew when it went to market we needed to improve it, so we were working on the next generation before we launched the first version,” says Graydon Reitz, director-Ford Global Electronics and Electrical Systems Engineering. “And when we started getting updates from the field, it just reinforced what we were already doing.”

Among the problems was a gap in operating instructions. So Ford introduced two initiatives patterned after customer-support programs used by consumer electronics companies.

Ford has launched a MyFord Touch owner-support website, featuring how-to-videos. And it made personalized instruction available through dealers.

Coming improvements will see new system graphics. Among the changes:

More than 1,000 screens in total have been updated, Ford says. Additionally, the system’s touch-screen now responds faster, a key complaint among owners.

“The hardware is very powerful, and when we originally introduced MyFord Touch we weren’t utilizing it as much as we should have,” Reitz says.

The improvements have been in the works for more than a year, Ford says. Four customer clinics helped generate feedback directly to engineers.

The system upgrade will be available for vehicles already equipped with MyFord Touch. Ford will mail thumb drives to eligible customers next year.

“We expect significant improvement in (quality rankings) and a step change in the overall quality of our products,” Reitz says.