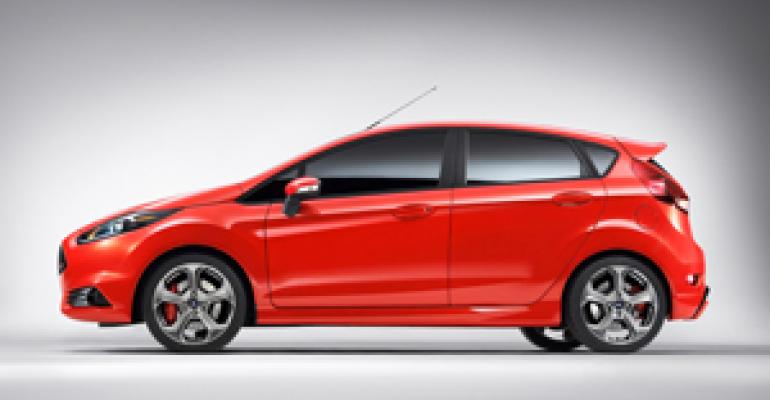 “This is a part of the segment we haven’t participated in – a Euro-centric hot hatch – for going on six years,” Robert Parker, Ford global market manager, says referring to the Focus SVT that went out of production after the ’04 model year.

“We’re thinking (we could attract) some Volkswagen GTI, Subaru WRX and MazdaSpeed3 customers in the segment,” he tells WardsAuto at a media event here. “Hopefully, they’ll give Ford a look where they haven’t in the past.”

Should the Focus ST succeed, it’s likely that more performance-based small Ford cars will follow, including a production version of the Fiesta ST concept, which joins the Focus ST on the stage at the L.A. Auto Show later this month.

The Focus ST will be powered by a modified version of Ford’s 2.0L 4-cyl. direct-injected turbocharged EcoBoost engine producing 250 hp and 266 lb.-ft. (360 Nm) of torque. The engine is mated to a 6-speed manual transmission.

The new model will be based on Ford’s new global C-car platform and its tweaked steering will provide maximum performance, the auto maker says. The ST will have a “highly distinctive” sports exterior finished in Tangerine Scream, a new body color that reflects its performance heritage.

Other body modifications include a 1-piece design interpretation of Ford’s signature trapezoidal grille, as well as sculpted side skirts, a rear bumper with diffuser vents in the lower fascia and a roof spoiler. Interior details range from specially designed pedals, steering wheel and gearshift to Recaro seats.

While the Focus ST has been shown before, the Fiesta ST debuting in Los Angeles will vary from the model that bowed at the recent Frankfurt auto show, with five rather than four doors.

Parker, without revealing whether either version will make it into production, says the 5-door makes better sense for the North American market.

“Five-doors are more popular in the U.S.,” he says. “(Owners) may go to the track on the weekend, but they are driving (their cars) every day. So it needs to provide spirited engagement. But it can’t be so raw that it becomes a drain on your daily drive, which some performance cars can do.”

The Fiesta ST, based of Ford’s global B-car platform, was inspired by the Ford Fiesta WRC, which has performed well on rally-racing circuits.

The EcoBoost engine is mated to a 6-speed manual transmission, which Ford says will help the performance car hold carbon-dioxide emissions to less than 140 g/km.

The exterior boasts a large trapezoidal grille, similar to that of the Focus ST. At the rear, a dramatic diffuser lends an air of sportiness, Ford says.

Parker declines to reveal volume expectations, but says there are indications the Focus ST will go over well in the U.S. Consumers have been flocking to the top-level Focus Titanium edition, signifying a willingness to pay more for a small car.

Additionally, the take rate for hatchbacks and manual transmissions for the regular Focus are higher than expected, he says.

Current and former Focus SVT owners also played a role in Ford’s decision to bring the hot hatch back to the U.S.

“Focus SVTs are still worth a good amount of money, so they are very popular,” Parker says. “That was the group that was driving online comments and chatter around when the U.S. would get the European Focus.

“So give them a lot of credit for driving the conversation for a global desire for Focus,” he says. “Once that was announced, the logical question was when the U.S. would be getting the ST.”