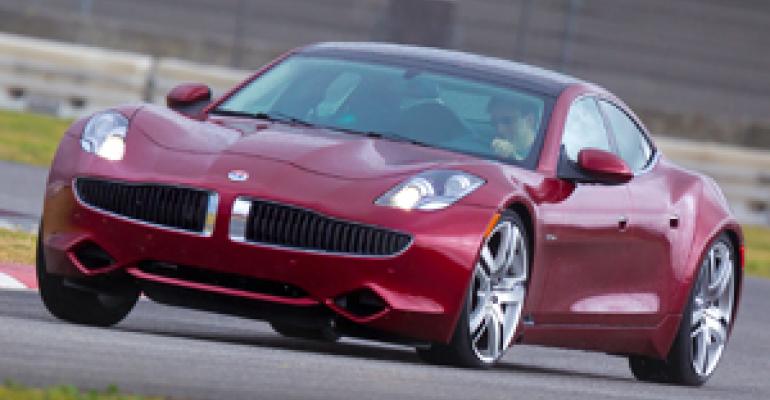 Some dealers do not expect to begin filling their orders, many of them pre-sold, until the first week of November. Fisker Automotive, backed by $1 billion in venture capital and low-cost U.S. government loans but missing delivery targets for its first product, expects to start providing U.S. dealers with demonstration models by the end of the month.

However, founder and CEO Henrik Fisker originally promised the car as early as September 2010. The delivery date was pushed to March 2011 and most recently delayed to September.

Some dealers do not expect to begin filling their orders until the first week of November.

Harding says the dealership has pre-sold 100 Karma orders and another 50 customers are on a waiting list.

“Interest is very high,” he says.

Moore helps manage one of the country’s most successful Jaguar and Aston Martin stores and expects a similar reception for the Fisker outlet.

“We believe the Fisker Karma will perform very well in our market,” he tells WardsAuto.

Lane, who also serves as Fisker chairman, took delivery of his Karma coinciding with a road show for the car spanning 104 dates at all 44 of the auto makers’ retailers.

“We just had our event here, and it was very successful,” says Robert Manrique, brand manager at Fisker Miami, part of the Warren Henry Automobiles group. “We should be selling very soon.”

About 3,000 orders for the Karma have been placed worldwide, the auto maker says.

Its equity backing includes a $529 million loan from a Department of Energy program to spur the development of alternative vehicles.

The 4-passenger Karma travels up to 50 miles (80 km) on its lithium-ion battery before a range-extending, 2.0L turbocharged 4-cyl. engine generates electricity to send it another 250 miles (402 km).

The auto maker plans to bring a more modestly priced plug-in EV, currently codenamed Project Nina, in 2013. It will be built at a former General Motors plant in Delaware.

Fisker acquired the site with the DOE loan one year ago and since has cleared the Boxwood Road facility of some 400 truckloads of materials, recycling 11.2 million lbs. (5.1 million kg).

The plant nearly is ready to be recommissioned and about one-third of 120 electro-mechanical technicians needed for the facility by the end of the year have begun the hiring process, Fisker says.

The Valmet plant building the Karma continues to ramp up production, expecting to hit 300 units-a-week by the end of the year.

Henrik Fisker told WardsAuto in 2009 he expected to sell 15,000 Karma plug-in hybrid-electric vehicles annually beginning in 2011, with the Nina pushing company volumes over 100,000 units per year by its originally intended launch date of 2012.

The fits and starts at Fisker further underscore the perils of the startup EV industry, which attracts billions of dollars from investors but arguably has seen just one qualified success to date in Tesla Motors.

Tesla went into production with the fully electric $109,000 Roadster in 2008 and through the first quarter of this year delivered 1,650 units worldwide. It targets a second model in 2012 and another variant shortly afterward.

Coda Automotive, which also has witnessed several production delays, recently opened its first retail store in California. It is unclear if the 5-passenger car will come to market this year. It was first expected in 2010.

Aptera Motors, another California-based startup, has returned investors’ deposits after it missed another production target. The auto maker tells WardsAuto it took the action because its credit-card bank could not properly manage the funds due to the age of the transactions.

“The road to financial ruin is paved with the bodies of automotive startups,” says Steve Fambro, founder of Aptera. Fambro left the company in 2009 and since has returned to the biotechnology industry.

“I never believed you could ever raise enough money to launch a car company that would compete with the likes of Honda and others,” he tells WardsAuto.

Sales of the Chevrolet Volt EREV and fully electric Nissan Leaf, launched last year and facing production challenges themselves from internal quality goals and the earthquake in Japan, have mustered fewer than 10,000 deliveries through August, according to WardsAuto data.

This week Mitsubishi raised the price of its i EV coming later this year to $29,125 from $27,990, excluding government rebates, citing unforeseen changes in market conditions.

“We believe in electric cars here,” he says from San Diego. “They are more efficient. They are the future.”