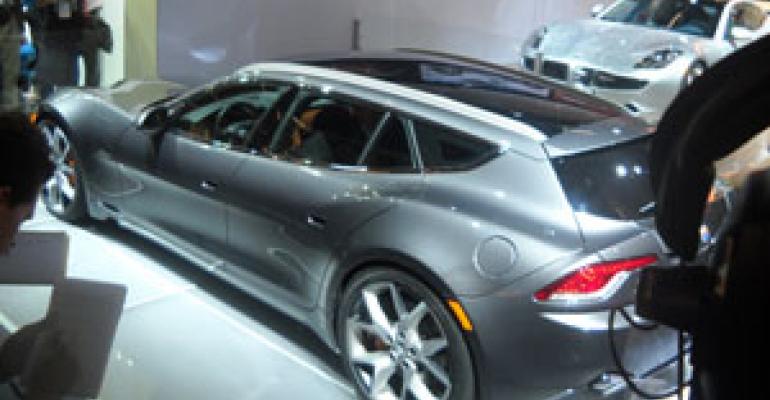 The Surf uses the same platform and powertrain as the auto maker&#8217;s electric Karma sports sedan, which has started deliveries. FRANKFURT – Vehicle designer-entrepreneur Henrik Fisker drives his brand into a new segment with the unveiling here of the Fisker Surf, a 5-door “shooting break,” a British term that has come to mean a vehicle that combines the features of a station wagon and coupe.

The Surf uses the same platform and powertrain as the auto maker’s electric Karma sports sedan, which has started limited deliveries.

Fisker drops names of some early customers who have taken delivery of the sports model: Gen. Colin Powell, the crown prince of Denmark and Leonardo DiCaprio.

He also says his company, which had two employees when it was founded in 2007, now has 700 workers around the world, including a new headquarters in Anaheim, CA, and a new engineering center in Germany.

The Surf, like the Karma, is an electric car with a range extender. The Karma powertrain, used by the Surf, has a total of 403 hp producing 959 lb.-ft. (1,300 Nm) of torque. The Karma emits 83 g/km of carbon-dioxide in range-extending mode.

The two cars share the same potential range of 300 miles (483 km): 25-50 miles (40-80 km) on electricity alone and 250 (402 km) with the range extender. Fisker also tells journalists here about a new supply deal beginning in 2013 with BMW for a 2.0L turbocharged gasoline engine that will serve as the range extender for a new midsize series of electric cars he dubs Project Nina.

The first vehicle will be a sedan built in a plant in Delaware that has a capacity of 250,000 units annually, although Fisker is planning only 100,000 units and has contracted for that many engines.

Additionally, Fisker announces new factory options available on the Karma, including aerodynamic body parts, wheel options and an “animal-free” eco interior that includes recycled woods from California forest fires and antique wood that had been on the bottom of Lake Michigan for 200 years.

The Surf will go on sale next year. Fisker says about 2,500 vehicles, or half the expected production, will be profitable.

But one thing he won’t do is decide how to spell break/brake in “shooting break.”

“They spell it one way in Britain and one way in France,” he tells WardsAuto. “How you spell it is up to you. I’m not the spelling master here.”