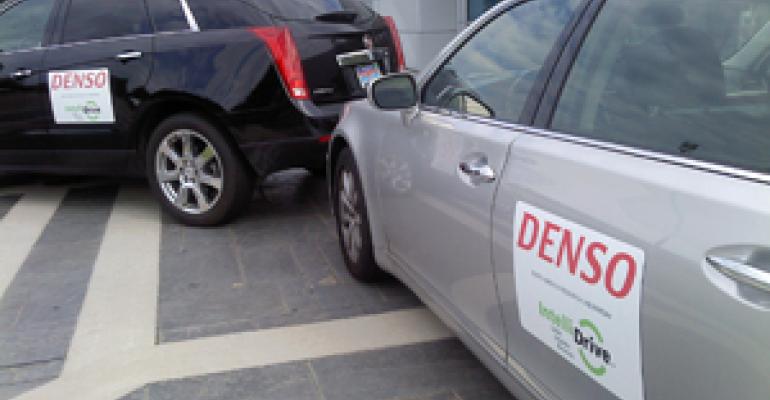 The supplier says its vehicle-to-vehicle technology could be ready for the U.S. market about 2013, and an aftermarket retrofit system may be offered for existing vehicles. SOUTHFIELD, MI – The proliferation of smartphones, Blackberries and iPads demonstrates the intense desire for people to communicate with one another and within a few years, vehicles may be similarly connected.

Denso International America’s Roger Berg, vice president-wireless technologies, describes the systems as similar to WiFi, but for vehicles and with no link to the Internet.

The DSRC module, about the size of a laptop computer, has a range of about 900 ft. (274 m), which is significantly wider than radar-based systems delivering about 200 ft. (61 m) in range in adaptive cruise-control systems, Berg says.

The goal is to establish a safety cocoon around an equipped vehicle so a driver can be warned of a hazard ahead, or of another car speeding through an intersection that is not yet visible.

During a demonstration in the parking lot of Denso’s North American headquarters here, the technology works as advertised.

As the Lexus creeps blindly forward from between two parked SUVs – and into the path of the approaching Cadillac – a series of loud beeps and visual warnings on the central display screen prompts the driver to hit the brakes immediately, preventing the car from being T-boned.

Another demonstration has the Cadillac sitting idle at a stop light. When the Lexus approaches too quickly, similar warnings are given.

Although a number of high-end luxury vehicles already integrate radar-based collision-avoidance technologies, the point of V2V is to make the communication link a 2-way street, allowing occupants in both vehicles to be aware an accident is imminent, by calculating current and future positions.

Some systems now in production enable the vehicle to brake automatically, even before the driver has taken action.

Berg says vehicles using V2V technology can be tweaked to deliver the same level of intervention.

“With more than 30,000 people a year killed on our nation’s roads, we need to keep looking for new ways to improve safety and reduce fatalities,” U.S. Secretary of Transportation Ray LaHood says in a press release announcing further government testing of V2V.

The U.S. Department of Transportation has selected the University of Michigan to conduct a road-safety field trial in Ann Arbor, MI, using V2V devices in everyday vehicles in a real-time environment.

The Connected Vehicle Safety Pilot will be conducted between August 2012 and August 2013 and include installation of the wireless devices in up to 3,000 vehicles to evaluate their effectiveness.

The field test will take place on the streets and highways of Ann Arbor. DOT will collect data from the vehicles in order to understand how different types of motorists respond to safety messages.

Denso’s demonstration also allows equipped vehicles to communicate with “smart” intersections, thanks to transmitters attached to the traffic-signal controller.

Denso’s technology offers the driver a “suggested eco speed” so the driver knows whether he can make it through the intersection.

The U.S. government’s safety pilot follows driver clinics being held throughout the nation. The first was Aug. 8 at Michigan International Speedway in Brooklyn, MI.

When its research is complete, the National Highway Traffic Safety Admin. is expected to decide in 2013 whether V2V technology is ready for commercial application for light vehicles, and by 2014 for heavy commercial vehicles.

Berg says Denso’s technology could be ready for market in the 2013 timeframe. He says it’s too early to discuss pricing of the device and won’t say whether the cost could be comparable to an in-dash navigation system or a premium audio system.

He says the goal is to be cost-competitive with radar-based collision-avoidance systems already in production. Denso also is working on an affordable V2V system that can be retrofit on existing vehicles.

Several competitors are proving out the technology, including Robert Bosch, Continental, Delphi and TRW, as well.

Berg welcomes the involvement of rivals, so V2V can gain acceptance more rapidly. Having a handful of vehicles so equipped serves little purpose, he says. The viability of the technology requires widespread application across millions of vehicles and at thousands of intersections.