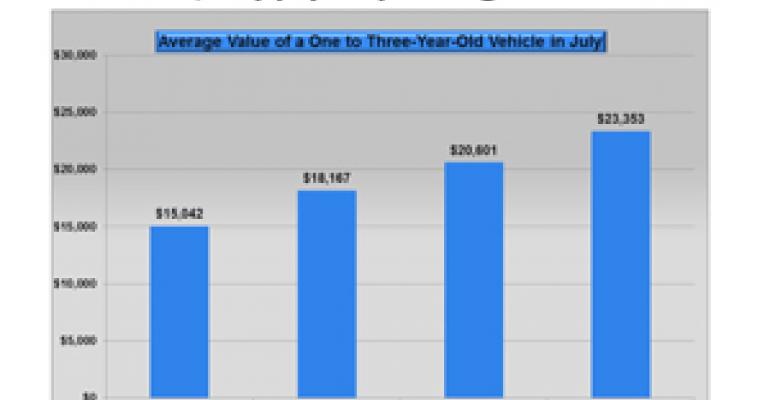 Despite the trials, tribulations and expenses of used-car operations this year, &ldquo;almost all dealers would love a repeat of their bottom-line performance,&rdquo; says Manheim Consulting&rsquo;s Tom Webb. Some franchised car dealers are experiencing sticker shock of their own when they see today’s prices for wholesale used vehicles.

They are paying more to replenish their pre-owned inventories at a time when supply is short and demand high.

But when it gets to the bottom line, few dealers are miffed, says Tom Webb, chief economist of Manheim Consulting, a unit of the Manheim car-auction house.

Dealers may pay higher wholesale prices but they, in turn, are charging more for used cars and earning higher profits this year.

They may beef about the low availability of used cars, but when they do procure them they “are able to quickly retail them,” Webb says.

“And sure, dealers complained of margin compression because of higher wholesale values, but dollar grosses were up along with the faster inventory turn,” he says.

Add the fact that retail auto financing not only is more available but also gives dealers enhanced opportunities to sell finance and insurance products, “and you get record profits,” Webb says.

So, despite the trials, tribulations and inventory-acquisition costs for used-car operations in 2011, “almost all dealers would love a repeat of their bottom-line performance,” he says.

That’s why franchised dealers place much emphasis on selling used cars, as evidenced by performance levels on this year’s Ward’s Dealer Remarketing 150, a list of U.S. dealerships with standout pre-owned departments.

Demand has been high for used cars since the recession years of 2008 and 2009, when many typical new-car buyers switched to used cars as they tightened their financial belts.

A saying in the remarketing business is that every used car begins as a new car. Consequently, the drop in new-vehicle sales two and three years ago now makes used-car supplies tight.

Auto makers sold 34 million new units sold in the two years prior to the recession, compared with 22 million in the past two years, Webb says. “This drop in new-car sales will continue to show its effect on the used-car market.”

The low used-car inventories stemming from soft new-car sales and leasing slumps of recent years will prop up used-car values for the time being, predicts Kelley Blue Book, which tracks pre-owned market prices.

It will take several years of strong new-car sales to replenish the shortage of used vehicles driving values up today, Kelley says.

The pace of used-car appreciation likely will subside for two reasons. One, a market correction is in the works because values became so elevated in the past year. Two, new-car supplies and sales will improve.

Still, Kelley expects used-vehicle values to remain strong for the next two to three years.

“While depreciation typically affects a vehicle’s value most in the first two years of ownership, it will not be as pronounced as it would have been a few years ago when the used-car supply was still very high,” Gutierrez says.

“Consumers who plan to sell or trade in a used car soon will likely see their vehicle hold its value well. Alternatively, shoppers in the market for a used car will continue to pay more, making it difficult to buy at a discount.”

In the past, franchised dealers typically would sell used cars that were 2- to 5-years old, while independent used-car dealers offered older stock.

But franchised and independent dealers are competing more and more for the older models in the wholesale market, Webb says. “The dearth of used-vehicle supplies” is causing franchised dealers to add older units to their inventory mix.

Will that change the way franchised dealers run their used-car departments?

“It already has,” Webb tells Ward’s. “In many instances, the older units and the ones out of a franchised dealer’s brand will sell better on a separate lot, so some dealers have established those.”

Internet automotive marketplace sites help dealers sell outside their franchised brands because consumers often just search for models, he says. “Now results of, say, a Subaru search, will show those at a Ford store just as prominently as those at a Subaru store.”

Dealers seeking to replenish their used-car inventories are leveraging their client bases and checking out their service lanes for customers who might take an offer for their cars.

But surveys show consumers are keeping their cars longer and might not sell unless the price is right. “The sheer engineering of modern vehicles makes for their longer lifespans,” Webb says.

Trade-ins, an important source of pre-owned inventory, are off at many dealerships, especially those representing Japanese brands.

Auto production in Japan has yet to fully recover from the devastating effects of that nation’s March earthquake and tsunami. That has resulted in lower inventories and less activity at dealerships.

“Obviously, when your new-car business is off because of a tsunami that is totally beyond your control, trade-ins will be off too,” Brian Gendron, general manager of Hendricks Lexus in Charlotte, NC, tells Ward’s.

Dealers are compensating for that by attending auctions more often. “Prices on the block are running high,” Gendron says. “Values still are up there. But so much depends on what is running and on the condition of the car.”

Many analysts predict auto makers will increase consumer incentives on new cars at the end of the year, particularly after the Japanese return to full production and seek to regain market share lost because of the manufacturing setbacks.

Some dealers are “questioning the possible aggressiveness to get new cars sold in the upcoming final few months of 2011, and how this might affect the values in the used-car market,” he says.

But for now, AutoTrader.com, an online car-selling site, reports production shortages and continued short supplies have pushed up prices for both new and used vehicles.

“The combination of consumers holding on to their cars longer, leasing drying up and the lack of new-car sales in 2009 and 2010 has caused a dearth of late-model, quality used-cars being available for sale in 2011,” says AutoTrader analyst Rick Wainschel.

Shoppers briefly turned away from these vehicles earlier in the year when gas prices neared $4 a gallon, but demand returned. Trucks and SUVs made big gains on the list of most-searched new vehicles, with seven fullsize trucks and five SUVs (including cross/utility vehicles) dominating the midyear list.

The biggest price increases were for smaller cars, including compacts and midsize sedans. Four of the vehicles in those segments saw their average asking prices increase more than 10%.

Some used fullsize trucks and SUVs took small hits, such as the Ford F-250 and Dodge Ram 1500 pickups. Their values dropped about 3.5%, AutoTrader reports.

The Chevrolet Tahoe took the biggest segment hit in asking price, declining 10.6%, a difference of $2,693.

CPO sales climbed 8.5% in the first half of 2011, “despite a significant reduction in available inventory,” Webb says.

The used-car market has seen “fundamental shifts,” ranging from higher values to greater dealer reliance on their pre-owned departments, he says.

“Dealers have become tremendously dependent on used cars,” he says. “They see the opportunities and they make money off of them. I don’t think they’ll go back to where they were.”