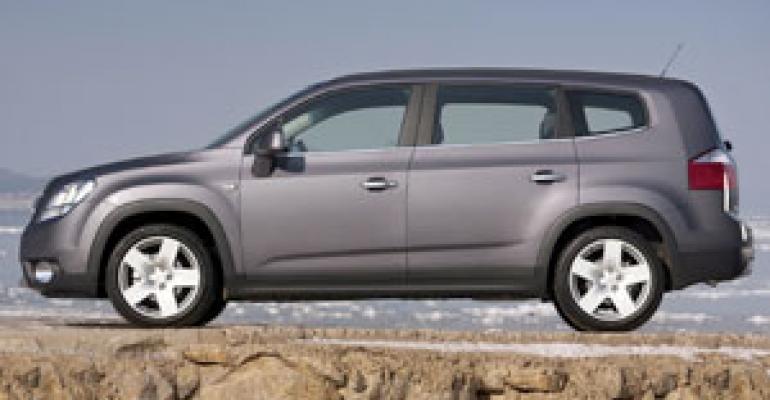 The 7-passenger compact CUV debuts in Canadian showrooms next week. &#8220;Forever and a day, the top-selling car in Canada is a small car,&#8221; says a dealer in London, ON. The arrival in Canada of the new-for-’12 Chevrolet Orlando is more proof the northern nation is more closely aligned with the rest of the world than the U.S., its largest trading partner and next-door neighbor.

“Forever and a day, the top-selling car in Canada is a small car,” says Gregg Cullen, general manager of Ray Cullen Chevrolet in London, ON.

Cullen admits the Orlando is “a little off the beaten path for us,” but says its versatility and price point promise to make it a winner.

“We expect it to do well,” says Cullen, who receives his first units Oct. 3 alongside shipments of the new-for-’12 Chevy Sonic compact car.

GM also sells the Orlando in Europe, including the U.K., South Korea and South Africa.

Wayne Brannon, head of Chevrolet in Europe, says the Orlando’s recent launch there has exceeded expectations. “Been short of supply all year,” Brannon tells WardsAuto.

Unveiled at the 2009 North American International Auto Show, the Orlando was slated for the U.S. in 2011 with great fanfare.

The Orlando’s debut alongside the production-intent Chevy Equinox 5-passenger CUV, Chevy Spark and the recently revived Cadillac Converj extended-range electric vehicle also came as GM lobbied for government and public support ahead of its bankruptcy.

However, GM executives killed the U.S. program before it got off the ground.

One reason: it would create too much overlap in the Chevy portfolio between the 5-passenger Equinox and 8-passenger Traverse CUVs. Both have proved to be runaway hits.

Reports also say the Orlando did not perform well in U.S. customer clinics, one of a number of measurements considered by GM when researching the possibility of bringing a new model to market.

GM spokesman Mike Albano does not elaborate on feedback GM received from those clinics, but size most likely played a role.

Against this backdrop, Ford also killed U.S. plans for a similar 7-passenger CUV called the Grand C-Max because it was seen as too small.

The CUV is powered by GM’s 2.4L direct-injection 4-cyl. Ecotec engine, a Ward’s 10 Best Engines winner. The I-4 mates to a standard-equipment 6-speed manual transmission or optional 6-speed automatic.

The Orlando’s exterior styling retains much of the look of its progenitor, such as the boxed-off rear end and third-row daylight opening. Lines of the headlamps have been softened and conventional fog lights replace the show car’s light-emitting diode units.

Wheel arches are less pronounced than on the show car and overhangs grow to accommodate the mechanicals of a production model.

Key competitors in Canada include the Mazda 5 and Scion xB in a largely undeveloped segment attracting buyers of small and midsize cars, compact CUVs and vans.

The polarizing 5-passenger HHR ended production in Mexico earlier this year, while the Montana, which was sold in Canada for three years after being phased out in the U.S., died only after GM killed the brand in 2009.

The vehicle is assembled by GM Korea in Gunsan, South Korea. The auto maker also is expected to add a production site in Eastern Europe.

It might be premature to entirely write off the Orlando in the U.S. GM’s recent labor agreement with the United Auto Workers union calls for a new compact vehicle at a to-be-determined plant.

“We’ve been watching (the Orlando) around the world, and the press has been great on the car,” GM’s Albano says. “We will continue to monitor it.”