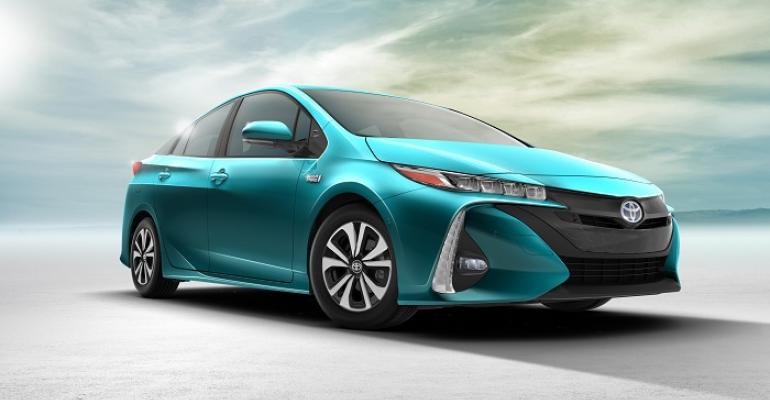 Toyota says the new Prius PHEV allows drivers to stay in EV mode in more situations. EV mode in the original Prius plug-in disengaged at speeds above 62 mph or with heavy throttle input.

NEW YORK – Toyota unwraps the second-generation Prius plug-in hybrid today at the 2016 New York International Auto Show, vowing the car, going on sale this fall in the U.S., will have double the range of its predecessor.

Officially now called the Prius Prime, the PHEV “is expected to offer an estimated two times the electric range of the previous model – 22 miles (35 km) – meeting the daily commuter distance of over half of U.S. drivers,” Toyota says in a pre-show release.

Toyota expects the Prius Prime’s miles-per-gallon-equivalent rating to be 120 or above, noting the car can travel more than 600 miles (966 km) on one 11.3-gallon tank or regular unleaded as well as a full charge. The ’15 Prius PHEV had a 95 MPGe rating.

As with the non-PHEV Prius, Toyota’s Hybrid Synergy Drive system powers the Prius Prime, pairing the automaker’s 1.8L Atkinson-cycle 4-cyl., a 2016 Wards 10 Best Engines winner, with an 8.8-kWh lithium-ion battery back. The new pack has double the density of the first-gen Prius PHEV’s 4.4-kWh pack.

The Prime has a Toyota-first dual motor generator drive system, using the electric motor and generator for drive force. In hybrid mode, the car can run on the gas engine, electric motor or both. When not in EV mode, Toyota says the Prius Prime will “automatically rely more on its electric capability in situations where it is more efficient than running the gasoline engine, especially in urban and suburban driving and during shorter trips.”

As with all PHEVs, the new Prius Prime uses regenerative braking to capture electrical energy during braking and deceleration and feed it to the battery.

Toyota says the Prius Prime, which is 2.4 ins. (61 mm) longer and roughly an inch (25 mm) lower than its predecessor, can be charged via a manufacturer-supplier cord in 5.5 hours on a 120V outlet, or less than half that time when plugged into a 240V outlet.

Like the new Prius liftback, the Prius Prime has edgy character lines, making it “no aero jellybean,” Toyota says. However, the automaker expects the PHEV to have one of the lowest coefficients of drag for a production sedan thanks to features like automatic grille shutters and an aero rear window.

Similar to the first-gen Chevy Volt extended-range EV, the Prime has a center console than runs front-to-back, seating four passengers, not five. Toyota says this lends a “high-end luxury coupe” look to the PHEV.

Like the original Prius plug-in, the Prius Prime will be available in all 50 states, Toyota says.

Toyota releases no pricing for the Prius Prime. The ’15 Prius plug-in began below $30,000 before state and federal PHEV incentives were applied.