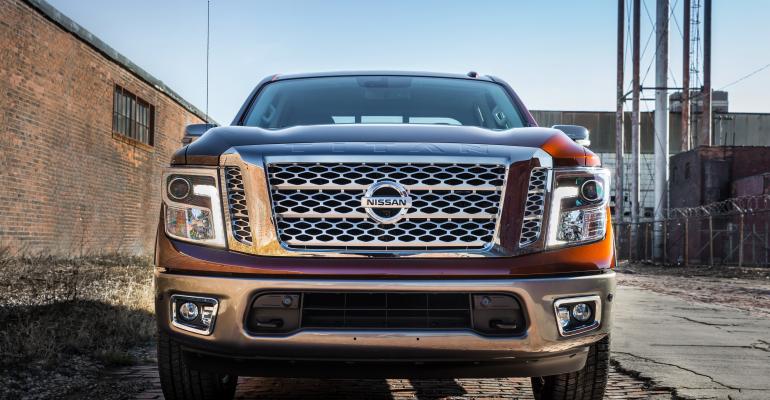 The second-gen Titan sees horsepower grow slightly from its 5.6L V-8 and later will add a new V-6 engine to the lineup.

NEW YORK – Following this year’s debut of the diesel Titan, Nissan rolls out the next model in its fullsize pickup lineup, the gasoline-engine ’17 Titan, this morning at the 2016 New York International Auto Show.

The half-ton gas-powered Titan, due on sale this summer in the U.S., initially will come in a crew-cab configuration, with single and king cabs due later in the ’17 model year.

Despite all the hype surrounding the diesel-engine Titan XD, the half-ton gas model is the volume configuration, expected to account for 85%-90% of total sales, Nissan has said.

“We’ve said before that even the lug nuts are different from Titan to Titan XD,” Fred Diaz, vice president of sales for trucks-Nissan North America, says in a statement. “What’s important is that these two trucks are serving a completely different type of customer. As the head of Nissan’s light-commercial-vehicle program in the U.S, I’m thrilled to be getting this truck into the lineup as an option for fleets as well as for the personal-use buyer.”

As expected, the second-generation Titan retains the 5.6L V-8 from the outgoing model, but horsepower is upped to 390 from 385. Titan XD buyers will be able to select the gas V-8 in addition to the 5.0L Cummins turbodiesel already in market, Nissan says.

The Japanese automaker also confirms an optional gasoline V-6 will be available in the new Titan, with details to follow.

Nissan will continue to assemble the Titan in Canton, MS, and the V-8 in Decherd, TN.

Several option packages and accessories will be available for the gas-powered XD including all-season floormats ($145), a rear-seat DVD entertainment package ($2,190) and a bedliner with built-in storage ($985).

Diaz and other Nissan executives have said sustaining Titan sales at 100,000 units annually is a goal for the second-generation truck.