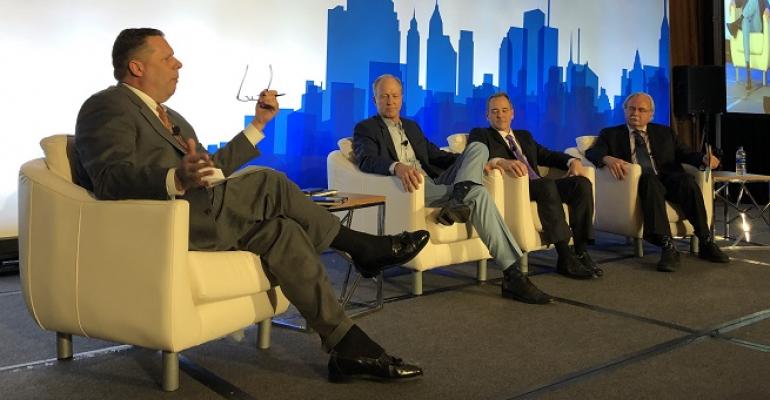 Time Enemy of Car Buying, Says Dealer Who Tracks It

Auto-industry conference panelists discuss cutting the time it takes to buy a car, the prospects of selling and servicing EVs and ways to abate an auto-technician shortage.

NEW YORK – Time – or too much of it, anyway – is the “enemy” of a dealership vehicle transaction, says car dealer Paul Walser, who is doing something about it.

Walser Automotive Group based in Minneapolis uses software to speed up how long it takes to do the paperwork and such. He says his group has it down to an average of 42 minutes.

“We need to get it to 25 minutes,” Walser says, noting protracted transaction times are a customer turnoff often cited on satisfaction surveys. “We’ve got to shorten how long it takes to buy a car. It shouldn’t take hours.”

But he makes a distinction. After the customer picks out a car (and that can take a while) is when the clock officially starts ticketing, Walser says during a panel discussion on the future of auto retailing.

The session is part of the 2019 Automotive Forum tied to the New York International Auto Show. The auto show, J.D. Power and the National Automobile Dealers Assn. host the conference.

“When customers are choosing a vehicle, that’s their time,” says Walser. So is when they are taking delivery of their new purchase, he adds.

Other topics include the prospects of selling and servicing electric vehicles (when and if they ever become mainstream) and ways to abate a chronic shortage of qualified dealership auto technicians.

Although EVs currently account for only about 0.5% of U.S. automotive market share, “opportunities present themselves,” Kurnick says.

It’s incumbent on automakers to build vehicles consumers will buy, and it is up to dealers to follow through on that, no matter what systems propel those products, he says. “A car is a car.”

He rebuts predictions that a potential proliferation of EV sales at the front end of the dealership will end up hurting the back end. That’s based on the premise EVs will require less service work because their propulsion systems are less complicated than internal-combustion engines.

“EVs are more complicated in a sense because of their electrical systems,” Kurnick says. “But it falls on our laps to train and tool properly (in the service department).”

Proper staffing levels of auto technicians in general remain an industry issue. For decades dealers have struggled to recruit and retain technicians.

“There’s an auto technician shortage,” Schlagheck notes, wondering where future ones will come from. “In 2025, will we be hiring kids from Apple to fix cars?” he quips.

“This is an issue that has been around for a long time,” Mercer says, playfully adding, “I think in the 1600s there was a shortage of wagon techs.”

Efforts are in place to attract new talent through training programs and explaining to tech-savvy young people considering a career that master auto technicians are well compensated.

“At a Mercedes-Benz store, the pay is six figures easily,” Mercer says. “Pointing that out is part of the education process. But it takes a long time.”

It is not hard for dealers to hire a service department employee who can do lube and oil-change work, Walser says. “It’s much harder to get a master technician.”

Some dealers get the latter by poaching them from fellow dealers. But Walser and Kurnick call that a questionable practice which doesn’t solve the fundamental problem.

“We’ve hired national recruiters” to find qualified technicians, Kurnick says, adding that offering trade-school scholarships is another way to abate the shortage. “It’s a problem without a short-term solution.”

“It’s a problem that has to be solved,” Mercer says.