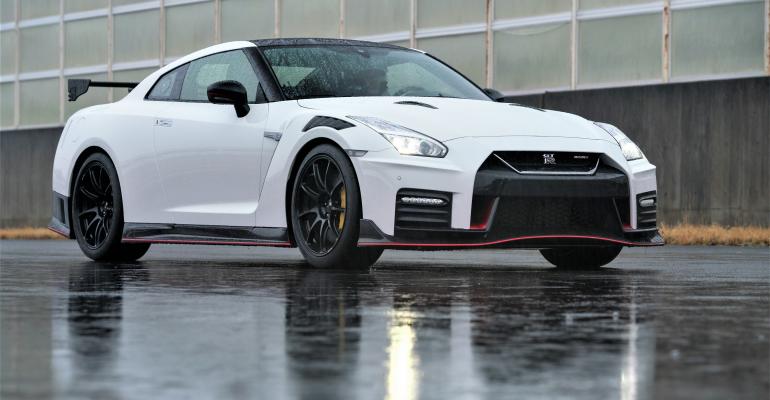 It’s a year for 50th anniversaries at Nissan. Besides the GT-R NISMO, the other new twist on the GT-R is the ’20 Nissan GT-R 50th Anniversary appearance package.

Nissan unveils a couple of new flavors of the racing-inspired Nissan GT-R for the ’20 model year at the New York auto show.

The top-of-the-line GT-R NISMO, the raciest of the GT-R variants – the NISMO name is derived from Nissan Motorsport – is the hot-sauce flavor. It’s now distinguishable on the outside by extensive use of carbon fiber.

Under the hood, it’s still got a potent 600-hp engine, like the ’19 model, plus a list of tweaks for 2020 aimed at better acceleration, steering, handling, braking and stopping. Improvements include new turbochargers from the NISMO GT3 race car, improved transmission control, updated suspension tuning and a carbon-ceramic brake system.

It’s a year for 50th anniversaries at Nissan. The other new twist on the GT-R is the ’20 Nissan GT-R 50th Anniversary appearance package (below, left). It commemorates the Skyline GT-R race car program. The GT-R won a record 50 Grand Prix races in less than three years starting in May 1969, Nissan says.

Besides the new ’20 models, the Nissan stand at the New York show is heavy on the brand’s racing tradition. It includes a “Dream Garage” display of historic Datsun and Nissan race cars and performance models.

Some fans still are nostalgic for the Datsun brand. Parent Nissan Motor Co. phased it out in the U.S. beginning in 1983 but announced in 2012 it was reviving the Datsun brand for basic-transportation models in emerging markets. The first new Datsun was the Datsun Go, a 5-door hatchback which debuted in India in 2014.

The ’20 Nissan GT-R NISMO is at the other extreme from basic. The ’19 model has a manufacturer’s suggested retail price of $175,540 plus $1,695 destination and handling. Pricing for the ’20 model will be announced closer to its summer 2019 market launch, the automaker says.

The biggest visual change is the carbon fiber throughout the ’20 model, including the front and rear bumpers, front fenders, hood, roof, side sill covers, trunk and rear spoiler. The company says those components represent weight savings of about 23 lbs. (10.4 kg), plus increased downforce at speed and better aerodynamics.

Other tweaks and new, lighter-weight components reduce the ’20 model by another 44 lbs. (20 kg) pounds, Nissan says.

As noted, the ’20 Nissan GT-R 50th Anniversary model is more strictly an appearance package, with unique exterior and interior treatments. In terms of standard trim and equipment, it’s a close equivalent to the ’20 GT-R Premium model.