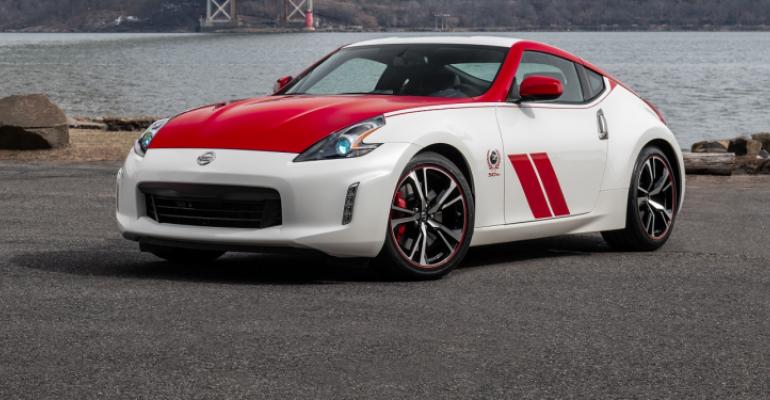 Nissan North America unveils the 370Z 50th Anniversary Edition appearance package in time for the 2019 New York international auto show, commemorating the original Datsun 240Z, a sports car intended for everyday use that in the 1970s helped put what was then the Datsun brand on the map in the U.S.

The ’20 370Z 50th Anniversary Edition is distinguished by racing-inspired exterior colors, special badging, and exterior and interior trim and equipment. It goes on sale this month. Pricing is to be announced. The nearest equivalent in the 2019 lineup is the 370Z Sport model, which has a manufacturer’s suggested retail price of $33,820, not including $895 destination and handling.

The Anniversary Edition’s color scheme mimics the original Brock Racing Enterprises Datsun 240Z BRE race car, which debuted in 1970. At introduction, the models come in two paint schemes only, white with red accents or silver with black accents. The painted accents include the hood, A-pillars, trunk and side mirrors.

Anniversary editions are powered by the same 3.7L V-6 engine as the ’19 370Z, which produces 332 hp and 270 lb.-ft. (366 Nm) of torque. A 6-speed manual transmission is standard and a 7-speed automatic is available. The standard wheels are 19-in. alloys, with red accents for either color scheme.