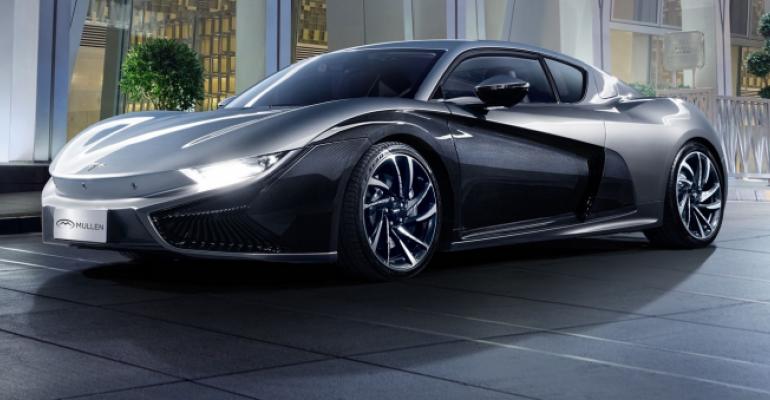 Mullen Aims to Bring Chinese EV to U.S. Next Year

Mullen Technologies, a Southern California-based company licensed to make and distribute BEVs, inked a pact in December with Qiantu Motor of China to homologate and assemble vehicles in the U.S.

The Qiantu K50, with an aluminum frame, carbon-fiber body panels and fitted with Brembo brakes and Pirelli tries, was shown during the 2019 New York auto show. The sports car, also with leather and Alcantara interior materials, has two electric motors with total output of 280 kW (375 hp) and maximum torque of 428 lb.-ft. (580 Nm).

“It’s in the process of being homologated for the U.S. market,” McMahon tells Wards. The car on display here at the auto show already is in production in China, he says.

He says the Qiantu K50 went on sale last August in China and sales have been “in the hundreds.”

The vehicle is priced at the equivalent of $105,000 U.S. dollars. McMahon calls that a starting point for what the price likely will be in the U.S., adding the vehicle’s cost could rise to $150,000 as Mullen hopes to offer a grade with range and performance higher than that of the base model.

Sales initially will begin in the Golden State as that is the epicenter of BEV sales in the U.S., he says. It also is the state where Mullen already has five used-car dealerships (in the cities of Anaheim, Bellflower, Downey, Fontana and La Habra).

The stores sell a range of common brands, but one listed vehicle in Anaheim is a BEV from the defunct Coda electric brand.

“We’re going to have direct dealerships…(and) the idea is to expand the dealerships network in California in the first couple years so there is already a distribution network in place by the time we launch this vehicle,” McMahon says.

Mullen wants East Coast dealerships as well, as both the West and East coasts are relatively robust BEV regions in the U.S.

Mullen joins other upstart brands which have announced plans to bring Chinese-built or Chinese-associated BEVs to the U.S. Some, including Faraday Future, are struggling. The Verge reported last month Faraday sold its Los Angeles-area headquarters to raise funds. It lost a Chinese investor late last year, delaying plans for it to assemble its FF91 model at a former Pirelli tire plant in California.

Other companies, such as BEV pickup maker Rivian, are too new to handicap, but Bloomberg recently reported discussions between Rivian and General Motors, which was to invest in the company, have cooled, reportedly on Rivian’s part.

Tesla is seen as a reason for the increased BEV-upstart activity in the U.S. Tesla, by a large margin, is the U.S.’s No.1 seller of BEVs.