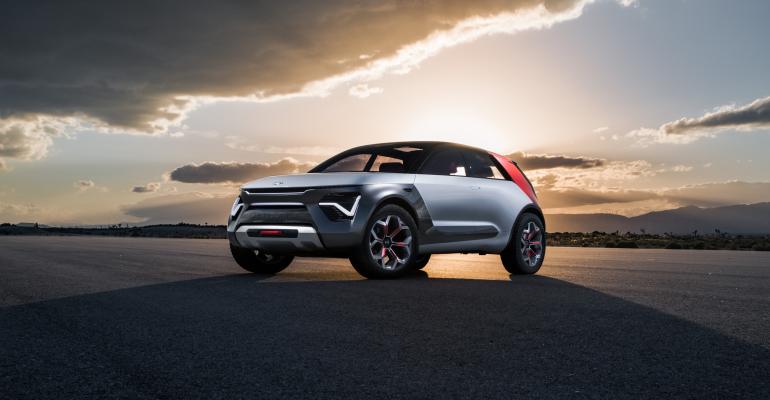 Artificial intelligence informs several technologies in the vehicle and could enable more in the future, Kia says of its Level 5 autonomous all-wheel-drive battery-electric vehicle concept.

NEW YORK – Dubbing it the “everything car,” Kia takes the wraps off its HabaNiro concept vehicle today at the 2019 New York auto show.

The HabaNiro, a play on the name of Kia’s existing Niro lineup of eco-friendly crossovers, is a compact CUV with a 300-mile (483-km) all-electric range and with all-wheel drive via front and rear electric motors, as well as Level 5 autonomy.

“This is no fanciful supercar that will likely never be built, but a prescient look into the future of mobility where automobiles will seamlessly integrate design, capability, usefulness and creativity,” Kia says in a statement.

Designed at Kia’s Irvine, CA, studio, the HabaNiro is made for urban and off-road driving and has metallic gray cladding; a “Lava Red” aero panel defining the C-pillar and extending over the roof; a shark-like grille with glass-black aluminum teeth in a slit opening; and satin and red aluminum exterior elements.

The HabaNiro’s Lava Red interior is entered through four butterfly-wing doors. Front seats are trimmed in bouclé fabric and there is a full-width heads-up display on the windshield in lieu of buttons and knobs. A concave acrylic instrument panel doubles as an interactive touchpad display. Swiping and moving vehicle options on the HUD are enabled by a Technical Option Sharing System (TOSS).

Ambient lighting is revealed through the geometrically patterned floor, and the steering wheel and instrument panel in the CUV retract forward when the Level 5 autonomous-drive system is engaged, Kia says, adding in this mode movies can be displayed on the HUD.

AI-based emotional intelligence is the secret behind the HabaNiro’s Eye Tracking System. When a driver looks up to the top of the windshield, the usual location of a rearview mirror, the CUV’s 180-degree rearview video display automatically activates.

Kia notes AI someday also could detect a hungry driver and direct him or her to the nearest food options.

“AI and automation shouldn’t take the joy out of driving, as some auto lovers fear, but enhance it – anticipating needs so we can concentrate on the driving experience,” Kia says.