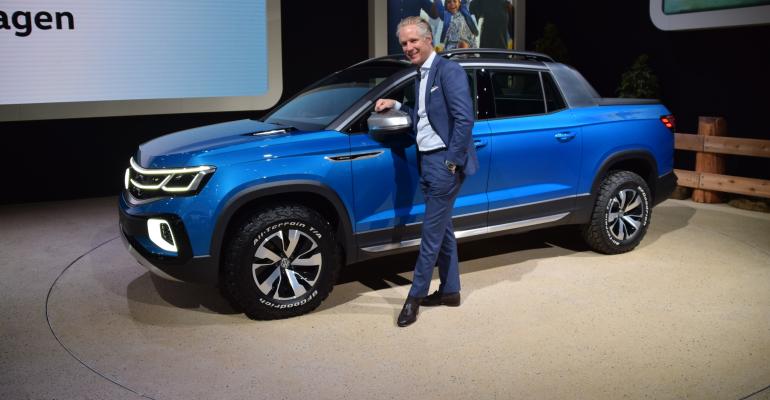 VW will gauge response to the Tarok concept in deciding whether to build a version for the U.S. Brand boss Scott Keogh says he likes the Tarok because the second-row seats fold, along with the rear wall of the cab, to extend storage space in the bed.

NEW YORK – If Volkswagen decides to sell in the U.S. a production version of the Tarok compact pickup truck concept shown here, it likely will be produced at VW’s plant in Puebla, Mexico, and an engine larger than the 147-hp 1.4L turbocharged 4-cyl. could fit under the hood.

So says Scott Keogh, CEO and president of Volkswagen Group of America and head of Volkswagen brand in North America, during a roundtable discussion with journalists at the New York International Auto Show, where the Tarok debuted alongside two other concepts, the trail-ready accessory-laden Atlas Basecamp CUV and the all-electric dune-inspired ID. Buggy.

Keogh sees opportunities in offering more lifestyle packages for the Atlas and perhaps mechanical upgrades for rugged off-roading. “I think it is highly likely we will bring something like that to market,” he says of the Atlas Basecamp (pictured, lower left).

But it’s the Tarok that has sparked much debate within VW because a pickup that small – which Keogh describes as A-segment, similar in size to the CUV smaller than Tiguan that is coming – has not been available in the U.S.

A production version of the Tarok will be made in South America, but a 25% tariff (the “chicken tax”) on imported trucks prevents sourcing for North America. That tariff would not apply if the vehicle were made at VW’s Puebla, Mexico, plant.

He sees another option in the integration with Ford in which VW will assemble a derivative of the Ford Ranger pickup, to be sold in South America and possibly other markets. Again, the chicken tax would be problematic.

Keogh says he likes the Tarok concept because the second-row seats fold, along with the rear wall of the cab, to extend storage space in the bed. “Then you get the length of a B-segment pickup” in a compact package great for maneuvering, fuel economy and everyday use.

VW will gauge response to the Tarok in deciding whether to build a version for the U.S. Keogh says the Tarok concept was shown at a VW event in Germany with a broad cross-section of dealers. “They gave a very positive reaction to it,” he says. 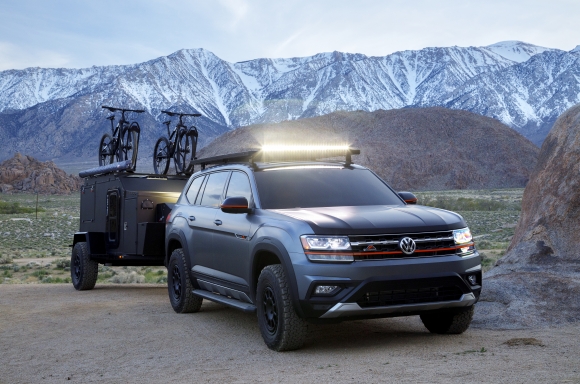 A pickup truck of any size would fill a void in VW’s U.S. portfolio. “We think there’s something there,” Keogh says.

Overall, he says VW of America sales are up 2.5% for the year, led by brisk demand for the new Tiguan, which is selling at twice the pace of the previous-generation vehicle.

The coupe-like Arteon sedan (also on MQB platform) is arriving soon in showrooms, with a starting price of $35,845. Keogh did not say when the U.S. would launch the sub-Tiguan CUV.

Also on the horizon, a production version of the all-electric ID CROZZ SUV from the MEB architecture will be unveiled in five or six months, likely with a different name, Keogh says, and will go on sale in the U.S. in late 2020.

The Chattanooga plant, which opened in 2011 and currently assembles the three-row Atlas and Passat sedan, is slated to build that first-generation EV beginning in 2022.

A five-seat version of the Atlas, the Atlas Cross Sport, will begin production in Chattanooga later this year and will go on sale in first-quarter 2020.