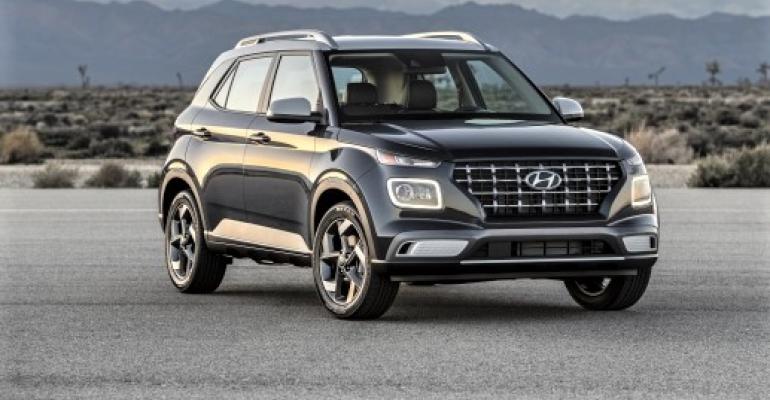 Hyundai’s latest CUV offering, with a reworked version of the automaker’s 1.6L Gamma engine, will be assembled in Ulsan, South Korea.

NEW YORK – Hyundai, a brand a few short years ago associated with cars rather than crossovers, debuts a sixth model for its U.S. CUV lineup at the 2019 New York International Auto Show.

The ’20 Venue joins the Korean brand’s roster as its smallest CUV, slotting below the Kona launched last year in the U.S. LMC and Wards Intelligence data show the Venue rides on the same platform as Hyundai’s subcompact car, the Accent. The Kona is based on the Elantra C-car’s chassis.

Wards Intelligence data shows the Small CUV group is one of the fastest-growing segments in the U.S., thanks to an explosion of offerings from automakers trying to attract buyers fleeing cars. Small CUV sales rose 32.2% last year to 1.3 million, up from a volume of 407,184 in 2013. The Jeep Compass was the group’s No.1-selling model last year (171,167) and leads the sector through the first quarter of 2019.

Hyundai says the Venue, on sale in the U.S. in the fourth quarter and 5 ins. (127 mm) shorter than the Kona, combines “savvy design with an abundance of standard safety, technology and connectivity features.”

On the safety front, Hyundai doesn’t specify between standard and optional equipment, but it lists forward-collision avoidance assist, lane-keeping assist and warnings for blindspot collision, driver attention and rear cross traffic as available on the Venue.

An 8-in. (20-cm) touchscreen and rearview monitor are featured in the Venue, as are Apple CarPlay and Android Auto.

Navigation, with free real-time traffic by HERE and free map updates for three years via Hyundai MapCare, also is available, as is Hyundai’s BlueLink telematics service with Amazon Alexa and Google Assistant integration. The latter allows Venue owners who have an Amazon Echo or Google Home device to start their car remotely via voice.

Venue design cues include a “solid and full-volume wheel arch,” strong character line, the new Hyundai face from the Kona and Nexo and cube-shaped headlamps.

It also says it created a high-tumble combustion system by optimizing port and valve shapes and is using a high-ignition energy exhaust-gas recirculation system. The latter has an external EGR cooler to expand the EGR-operated region to bring about the improved fuel economy, Hyundai says.

The automaker also is employing what it calls an intelligent variable transmission, or IVT. Developed by Hyundai, the transmission “offers a shift control strategy which enhances shift response through a continuous range of effective gear ratios,” enabling a smooth transition of engine operating speeds and improving fuel efficiency.

The Venue also has a dual cargo floor, or the ability to have the floor in a lower position to fit taller items in the cargo area, as well as 60/40-split fold-flat rear seats.

Like many small CUVs, the Venue will be available in some unusual colors, including Green Apple and Denim. The latter comes with a denim cloth and leatherette interior and has a white roof. Standard interior fabrics are black or gray cloths.

The midsize car is heavily restyled for ’20, wearing a 4-door coupe look, and its interior touts a “first-in-class” 12.3-in. (31-cm) digital instrument cluster. 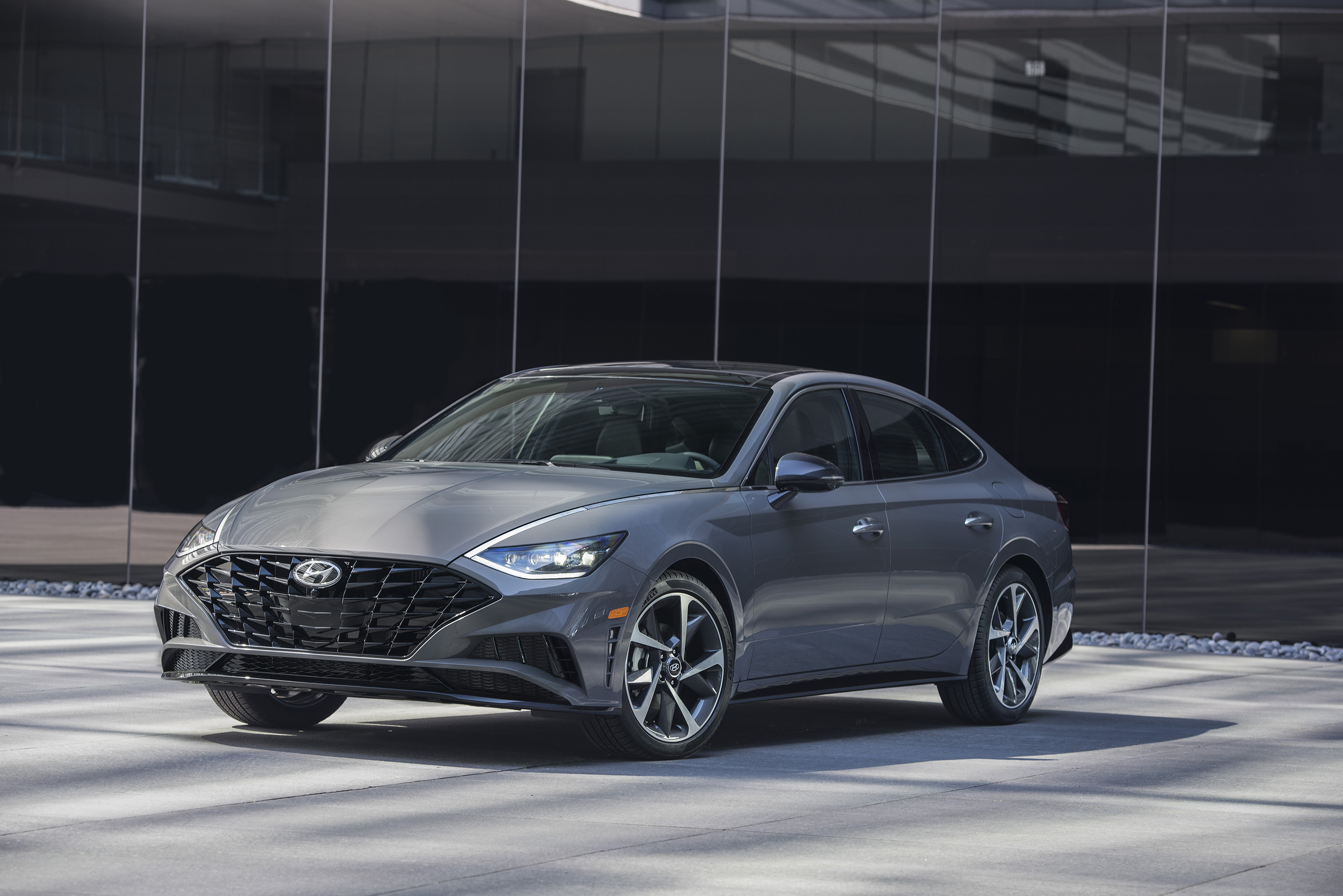 The car, going on sale in October in the U.S., will boast other unique touches including a Hyundai-first digital key (the ability to lock, unlock and drive the car via a smartphone app, no physical key required) and exterior lighting that looks like chrome when turned off.

“A chrome line flows from the wing mirror, right around the side passenger windows, and returns to the front of the car by running down the length of the hood and ending at a sharp right angle beneath each headlight,” Hyundai says. “This chrome strip features graduated LED Daytime Running Lights embedded with Hidden Lighting Lamps.”

The eighth-generation Sonata rides on a new platform that Hyundai says is lighter and more rigid than its predecessor, thanks to use of hot stamping and super-high-tensile steel, as well as a multiload path structure to better manage crash energy in collisions.

It has a new shift-by-wire gear selector for a technologically advanced appearance and to free up space in the center console, Hyundai says.

Hyundai also says the car’s handling is more nimble than its predecessor, and notes it is packed full of technology, including advanced-driver-assist systems (ADAS) enabled by three radars, 12 ultrasonic sensors and five cameras. 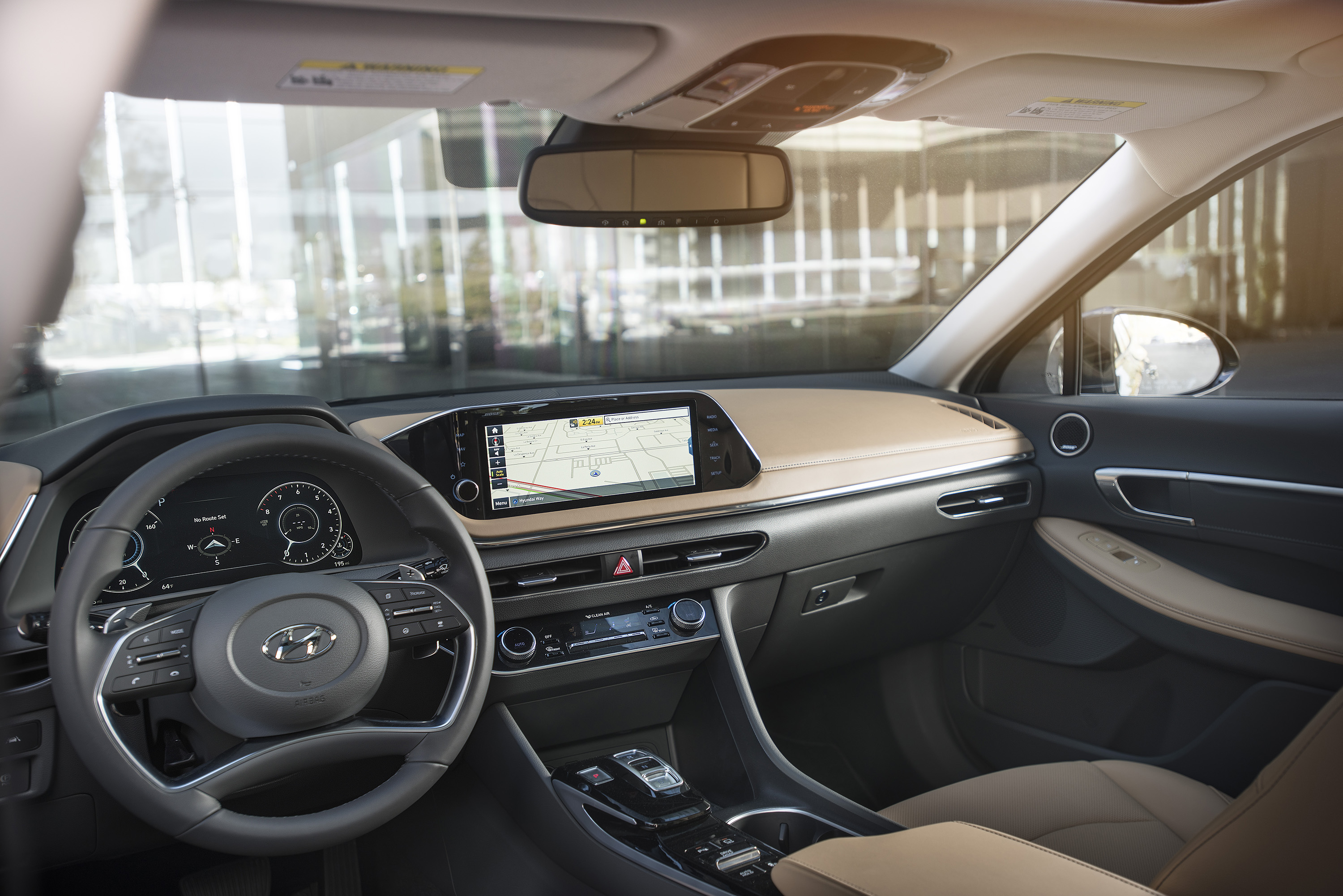