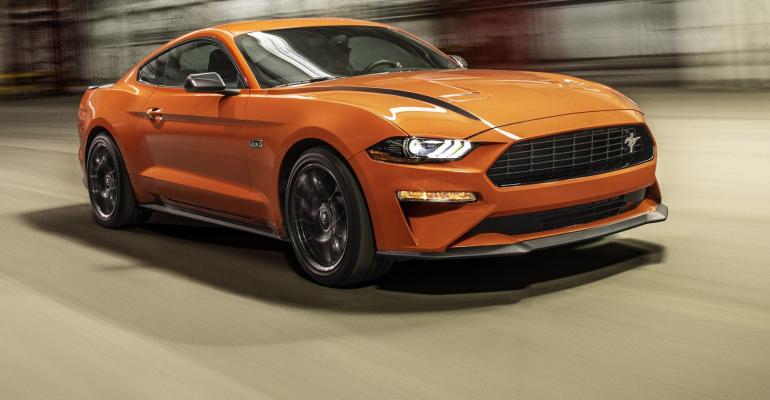 Ford Performance shifts its focus from engineering the 700-hp Shelby Mustang GT500 to bolting the award-winning, high-output Focus RS 4-cyl. into the base Mustang.

A 10-month Ford Performance skunkworks project to drop the engine from the Ford Focus RS into the Mustang culminates with the New York International Auto Show debut of a 2.3L High Performance Package in the base Mustang.

Ford takes the unusual step of engineering a previously transverse-mounted 4-cyl. engine from the discontinued Focus RS into a longitudinal arrangement as part of an optional package arriving in dealerships this fall in entry-level ’20 Mustang EcoBoost fastback and convertible models.

The uplevel Mustang EcoBoost is powered by the Valencia, Spain-built engine producing 330 hp and 350 lb.-ft. (475 Nm) of torque, 20 hp short of the engine’s output in the all-wheel-drive Focus RS. The 2.3L turbo in the Focus RS was a 2016 Wards 10 Best Engines winner.

Ford says the engine is specifically engineered, tuned and built for Mustang’s rear-wheel-drive layout, as well as for power balance, responsiveness and durability.

The engine produces 20 hp more than the current base Mustang 2.3L EcoBoost turbo 4 cyl. That engine, built at Ford’s Cleveland (OH) Engine Plant, will be offered alongside the high-performance version. Both engines will be offered with either a 6-speed manual or optional 10-speed automatic transmission.

In addition to the peppy RS engine, the Performance Package includes larger brakes and aerodynamic and suspension parts from the Mustang GT.