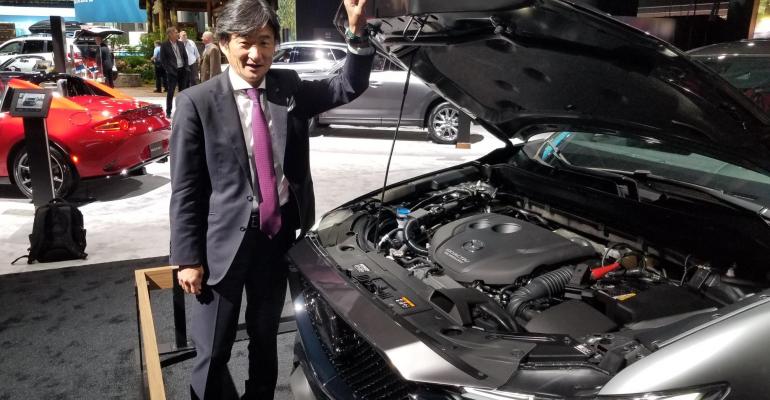 NEW YORK – It’s taken nine years, but Mazda’s plan to bring a diesel engine to the U.S. market will finally bear fruit in July as the ’19 CX-5 midsize CUV will reach showrooms with its long-awaited 2.2L Skyactiv-D 4-cyl. engine.

Only the top Signature trim level of the CX-5 will be available with the 168-hp diesel engine and all-wheel drive, priced at $41,000. A similarly equipped model with a gasoline engine costs $37,000.

Mazda says 20,000 hand-raisers have expressed interest in the diesel, and customers have begun placing orders this week.

The CX-5 is far and away Mazda’s most popular vehicle, achieving 150,622 deliveries last year. But it’s a bit player in the Midsize CUV segment, placing 10th behind vehicles such as the Toyota RAV4, Honda CR-V, Chevrolet Equinox and Ford Escape, according to Wards Intelligence data.

Only the Equinox and its GMC Terrain platform mate offer a diesel (a 1.6L sourced from Europe), and the take-rate in ’18 for them was a mere 1.4% and 3.8%, respectively. Together, they combined for 9,772 diesel engines last year.

Mazda says its 2.2L diesel has achieved an 8% take-rate overall in other markets where it has been available – Europe, Japan and Southeast Asia. The automaker says its goal for the U.S. is to sell 10% of CX-5s with the diesel, which would mean about 15,000 units.

Getting the diesel to U.S. consumers has been arduous for Mazda, as engineers have added and adapted technology and recalibrated the engine over the past several years to meet increasingly strict emissions regulations.

Volkswagen’s 2015 cheating scandal, in which the automaker was exposed for rigging diesel engines to comply with emissions standards only when being tested on dynamometers and not in the real world, muddied the waters further as U.S. regulators became extra cautious about diesels, causing long delays in achieving certification to sell them.

As a result, brands that had been selling diesel engines, such as BMW and Mercedes-Benz, have withdrawn those products from the U.S., with uncertain plans to bring them back.

Mazda chose this week’s New York International Auto Show as its platform to announce its diesel intentions, and the automaker says most of the early intenders seem more interested in the boost in low-end torque inherent in diesel engines than they are in an expected improvement in real-world fuel economy.

During a roundtable interview with journalists at the auto show here, Ichiro Hirose, senior managing executive officer in charge of powertrain development at Mazda, says he expects many customers who buy the Skyactiv diesel engine will be pleasantly surprised by their observed fuel economy.

“For real-world fuel economy, I believe you can get a very good number,” Hirose tells journalists.

Still, the fuel-economy rating is a far cry from the 32/43 mpg (7.3-5.5 L/100 km) figures anticipated by Mazda in 2010, when journalists were first allowed to test-drive a 2.2L Skyactiv diesel prototype Mazda6 in Berlin.

Since 2010, Mazda has launched three diesel engines in other markets with displacements of 1.5L, 1.8L and 2.2L.

Along the way, engineers were endlessly tweaking the 2.2L in hopes it would launch in the U.S. Many times, it appeared the Mazda diesel engine program was dead for the U.S., but management never officially pulled the plug.

Diesel engines often have high compression ratios (around 16:1), but Mazda’s Skyactiv-D program originally pushed for a low compression ratio of 14:1 to provide for a better air/fuel mixture in the combustion chamber.

“Thanks to that low compression ratio, our cylinder pressure was lowered,” Hirose says. “We were able to reduce the weight of rotating parts.”

But four or five years ago, Mazda decided to incorporate AdBlue urea dosing for engines sold in Europe (to meet strict Euro6D regulations) and for the engine that ultimately comes to the U.S. this year.

Hirose says that decision was made, especially regarding the diesel engine for the U.S., because Mazda’s testing found real-world conditions in which drivers who are hard on the throttle would cause excessive NOx emissions. Using AdBlue guarantees the CX-5 diesel will comply with emissions regulations no matter how hard it’s driven, Hirose says.

Meanwhile, Mazda diesel engines in other markets do not use AdBlue.

Improvements in fuel-injection technology allowed Mazda to achieve the proper air-fuel mixture while raising the compression ratio to 14.4:1, theoretically boosting efficiency, in the engine launching now.

The engine uses sequential twin turbochargers, and its block and head are fabricated from aluminum. The addition of a NOx storage catalyst and expanded application of exhaust-gas recirculation help further reduce NOx emissions, Hirose says.

In other powertrain developments, Hirose says Mazda plans to introduce its own self-developed battery-electric vehicle next year, but U.S. distribution is undecided.

A year ago, Mazda allowed journalists to test-drive a prototype Mazda3 with the company’s innovative Skyactiv-X spark-compression ignition engine, which runs on gasoline but is designed to achieve diesel-like fuel economy.

Hirose says the company’s vision is for Skyactiv-X to be part of the U.S. engine portfolio, but he did not say when.