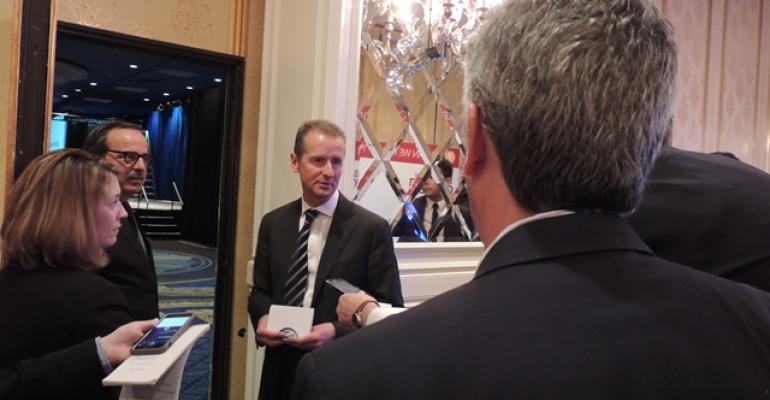 LAS VEGAS – Volkswagen’s U.S. unit will get more responsibility and greater freedom “than ever before,” VW-brand CEO Herbert Diess says as the beleaguered automaker tries to work its way out of its diesel-emissions mess.

“For me this was very important to come here, to get the contact with the dealers,” Diess tells journalists after a private franchise meeting with retailers here at the National Automobile Dealers Assn. convention. “We are working to redefine the Volkswagen brand in the United States by strengthening our management team and partnerships with dealers and product portfolio and we want to grow the volume consistently beyond past levels – and we will do this with our partners, the dealers.

“More than ever we will include their ideas and requirements into our decision making,” he promises. “Our American team will get more freedom, more responsibility than ever before. Right now our most important task is to solve the diesel emissions issue and to rebuild trust among our customers, employees and dealers.

“Volkswagen is a great brand with great potential and we remain fully committed to the U.S. market.”

Diess doesn’t put a target on VW’s volume growth. Prior to the diesel scandal, the automaker was aiming to more than double sales to 800,000 units per year by 2018. But at this year’s auto show in Detroit in January, VW CEO Matthias Mueller said the company was putting those ambitions aside.

“We didn’t talk about the volume, but we did talk about growth, consistent growth,” Diess says of his meeting with dealers. “And we will bring the product momentum in the next years with SUVs, with two important SUVs to be launched and adding some more production of existing models. So we will fight for more growth.”

Due to hit the market early next year is VW’s CrossBlue crossover SUV, which is sized to compete with the Ford Explorer and will be built at the automaker’s Chattanooga, TN, assembly plant. Coming later in the year will be the next-gen Tiguan CUV, which is growing in size for the U.S. market and will be built in Mexico.

Also being eyed but not greenlighted for now are a small CUV based on the Golf, shown as the T-ROC concept in January and a coupe-like version of the CrossBlue.

Diess says there was no discussion during the meeting with dealers about compensation for losses caused by the stop-sale of diesel-powered cars. Dealers reportedly have been asking for $1 million in reparations that would be doled out over several years, but threats of a lawsuit remain.

This week dealers formed a special council to negotiate compensation in the hopes of avoiding legal action.

Diess says compensation was not discussed at Saturday’s meeting, and he indicates he is hopeful any lawsuits can be avoided.

“I think we had a very positive atmosphere,” he says.