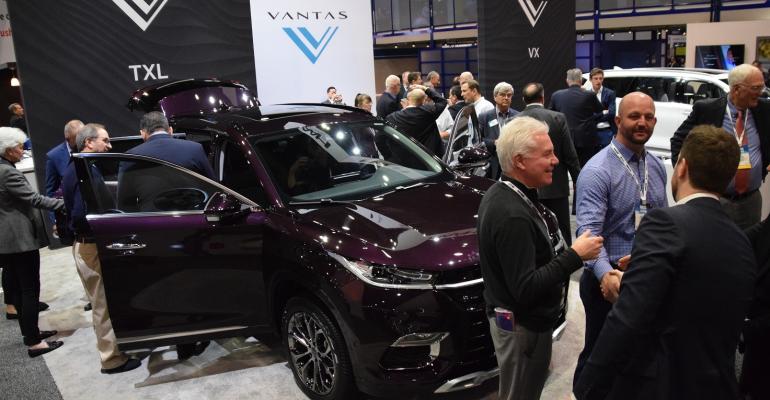 Both vehicles, the two-row TXL and three-row VX, come from Chery's Exceed brand in China. The TXL currently is available there, while the VX is expected to go on sale soon in China.

HAAH Chairman and CEO Duke Hale tells Wards the plan is to sell the TXL in the U.S. in fourth-quarter 2021 and the VX six months later.

The vehicles, currently undergoing the homologation process, will be shipped to the U.S. as semi-knocked down kits, with perhaps tires and wheels being purchased in the U.S. to avoid certain tariffs.

Vantas is searching for a brownfield site in the U.S. to locate the SKD assembly plant. Eventually, Hale says complete vehicle assembly could occur in the U.S.

As of last week, HAAH had assembled 80 retail outlets to sell the TXL and VX, and Hale says he hopes to have 240 dealers in time for the TXL launch late next year. He hopes ultimately to have 330 retailers nationwide.

He says Vantas dealers will use a haggle-free sales model, and that much of the transaction will be conducted online with customers. With a small number of dealers – basically one showroom per metropolitan area – Hale expects the TXL and VX to be several times more profitable for retailers than other vehicles they sell.

Pricing will be announced closer to launch, but a company spokesman says it’s possible to achieve a 20% reduction in price compared with rivals such as the Hyundai Santa Fe or Kia Telluride. A direct-injected 2.0L turbocharged gasoline 4-cyl. is expected under the hood of both the TXL and VX. Both vehicles are front-wheel drive, with all-wheel drive as optional.

This is Chery’s second attempt to import Chinese-built vehicles to the U.S. The automaker had a deal with entrepreneur Malcolm Bricklin 15 years ago, but cars never arrived and the case went to litigation. Bricklin won a $2 million settlement.

A year ago at the NADA expo in San Francisco, HAAH displayed Chinese vehicles built by Zotye, with plans to sell them in the U.S. Those plans continue moving forward, a HAAH spokesman confirms. Zotye and Vantas vehicles would be displayed in the same showroom.