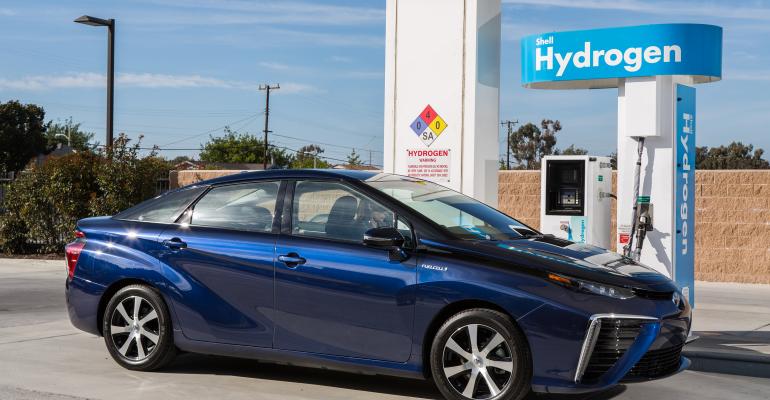 Not even the expiration of federal tax credits has dampened enthusiasm for the fuel-cell car in the U.S., a top U.S. executive says.

Bob Carter, senior vice president-Automotive Operations for TMS, won’t specify how many Mirais he is seeking, but says he has asked for a “substantial” increase in supplies of the FCV after 16,000 potential U.S. buyers expressed interest in the 4-seater.

“We really haven’t done any marketing, (so) that’s a lot of activity,” he says.

The Mirai doesn’t go on sale until October, when it will be offered only in California under a $499/month lease that includes free hydrogen fill-ups. Toyota expected first-year sales in the hundreds, with annual volumes forecast to rise to the tens of thousands by the end of the decade.

“I think we may be in a situation that, before we introduce the Mirai, we may have our initial production lines completely sold out,” Carter says. “We’ve already requested more. We’re still working out the details…(but volumes) will be substantially more than the original (2015-2016) plan.”

Carter said Jan. 22 the Mirai, in its first month on the market in Japan, already has drawn 1,500 orders, prompting Toyota to plan a hike in production. Toyota initially believed it would sell only about 400 of the cars in Japan.

Toyota reportedly is investing another ¥20 billion ($184 million) to boost production of key components, such as the fuel-cell stack and hydrogen tanks to meet the car’s new production schedule.

In a meeting with reporters today on the sidelines of the 2015 NADA Convention & Exposition, Carter expresses strong optimism about the future of FCVs.

“This is a midterm-long-term play,” he says. “I know there are a lot of naysayers, but the technology is real and the consumer benefit is real. We believe it’s a better application of a battery.

“It’s my belief the Mirai over the next 10 or 20 years can take us down the steps of a true hydrogen society.”

Although he says he was wary about whether demand would be tempered by the expiration of federal tax credits for FCVs at the end of 2014, Carter says initial reaction from potential buyers has renewed his confidence.

“I was a little concerned; it always helps to have a little assistance to launch a new vehicle,” he says. “But that has not changed the consumer enthusiasm we’re seeing. Time will tell.”

Carter says Toyota’s decision this month to offer its 5,700 fuel-cell patents royalty-free to other automakers and suppliers and its partnerships to establish refueling stations in California and the East Coast signal the automaker’s commitment to the Mirai’s powertrain concept.

“We believe once we can make it successful in California and get the Boston-to-New York corridor going, the scale could be there to migrate (the Mirai) to a national distribution – over time, 10 to 20 years out.”

Carter says Toyota hasn’t determined when it will begin taking deposits for the car in the U.S., but will make the Mirai available first to the 16,000 that already have indicated an interest.