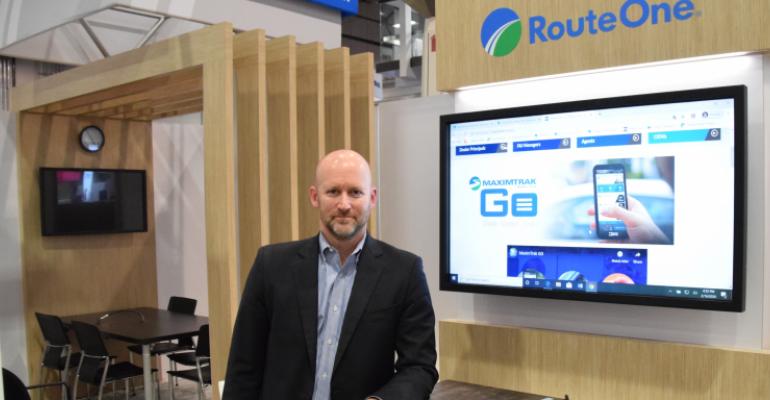 The company has 20,000 dealers enrolled on its credit application processing platform, including 9,000 participating in its eContracting service.

LAS VEGAS – RouteOne, founded in 2002 to connect thousands of dealers and finance sources in North America, is helping nudge the industry toward a fully digital environment in which consumers can finance and purchase a vehicle on the Internet, in the showroom or through the traditional finance and insurance process.

The privately held company, based in Farmington Hills, MI, has grown to about 400 people, mostly at the headquarters and in the Philadelphia office that houses RouteOne’s MaximTrak F&I management team.

The company also has field support in two dozen major population centers and now has more than 2,300 dealers aligned with its Digital Retail subscription products.

RouteOne has 20,000 dealers enrolled on its credit application processing platform, including 9,000 participating in its eContracting service. Nearly 80% of all consumer credit applications processed by RouteOne can be eContracted, the company says.

The ultimate goal of the platform is cleaner credit processing and funding for finance sources, robust F&I process options and faster funding for dealers, while creating a great experience for consumers.

The company was created as a joint venture by Ally Financial, Ford Motor Credit, TD Auto Finance and Toyota Financial Services in 2002 to improve the F&I process for auto dealers and their customers. Those four founding companies retain RouteOne ownership and are represented on the company’s board of management.

At this past weekend’s National Automobile Dealers Assn.’s annual Convention and Expo here, Oesterle spoke with WardsAuto about the company’s growth initiatives.

WA: What’s it been like being owned by four companies?

Oesterle: It’s been an interesting evolution for us, and it really puts us in a position to have a view of the overall industry informed by both the captive experience and the independent bank experience.

Oesterle: We have grown over time to have 1,400 finance-source customers on the platform. We make sure that we meet dealers wherever their technology is. Dealerships might have 12 or 14 different systems in operation in order to sell and deliver a car. That can be a CRM (customer-relationship management system) or the DMS (dealer-management system). It can be a website provider; it can be an inventory management system. There's a whole rainbow of different entities out there. In traditional retail, these are just systems that are required to deliver a car. As it turns out, many of those same systems need to be invoked even if the deal starts out online in a digital retail environment. Most of the new-car retailing resolves down to a delivery in-store today. By most, I mean almost substantially all.

WA: How much new-car retailing – actually completing the transaction – is happening on the Internet today?

Oesterle: It’s a relatively small sliver. Everybody's working to get there, and in some cases we and others have powered some of the early implementations that have allowed it. But even if the deal starts online on our digital retail platform, it’s usually resolving to a physical delivery and most of the time that's in the store.

WA: How do you define digital retail?

Oesterle: We partition it into three broad buckets. One is traditional F&I, where substantially all of the work happens in a store and F&I office for resolution. The other is showroom, where a dealership might use our mobile point of sale, which is an iPad-based selling tool to initiate credit, go through the protection product and process. We've called that digital retail – even though it's within the confines of a store, it's not tethered to a desk or an F&I office. And then the third is more of what we generally think of when you say digital retail, which is pure online, engaging with the customer in their living room, and then initiating the sales process with that.

Oesterle: Yeah, we would very much call it the latter – allowing customers to initiate, shop, get as far as they can in the sales process depending on the dealer and OEM with whom they're engaged. Frankly, if we constrained the title of digital retail to only transactional, there'll be a lot less of it going on. I would say there's a lot of energy in the used-car retailing space that is going much further with deliveries. Carvana, for example, is taking advantage of our remote eContracting capability, which allows a customer to receive from a dealer access to a contract package that they can review.

WA: You have a remote electronic signature capability?

Oesterle: Yes, we have 750 dealers signed up for it, but only a handful are generating meaningful transactions: Carvana, of course, being one of them, a couple of other used-car retailers are looking at them. We do have a couple of new-car dealers who use them. But I'd say 5% of the dealers are generating 95% of the transactions. Most of the time, folks are resorting or resolving to more traditional processes.

WA: As shoppers are looking for cars, you want to draw them into the process?

Oesterle: Yes, the dealer wants to get them in the process. We have something we call a Mobile Point of Sale. And it's more of a concierge selling tool, or we have plug-ins. We don't sell websites – we sell plugins to websites to allow the initiation of the finance process.

WA: I understand you’ve seen a 45% increase in applications originated with the in-store Mobile Point of Sale application?

Oesterle: Yeah, we initially put that tool out there expecting it to be an interesting case for a handful of dealers, but it's gotten quite popular. Customer expectations have risen, and dealer processes have responded quite nicely using some of these tools.

WA: How do you go about expanding?

Oesterle: We're always looking to grow our business. We have sales folks who are key-pointed in major population centers, which would also be where dealerships are concentrated. We have an inside sales team that makes outbound calls to those dealers. And through our OEM and finance source relationships, we try to extend our reach and get leverage there, too.

WA: You’re focused in the U.S. and Canada. How about expanding to Mexico, Asia or Europe?

Oesterle: There is reason to think about it. Our MaximTrak platform is internationally enabled for multiple jurisdictions. We did some work for a customer that allows us the capability to operate there. We don't have a push to go there on our own. However, as we serve OEMs, we're always exploring opportunities to support them, and we'll go where the market needs us to.

WA: What do the next couple of years look like?

Oesterle: We're building out and continue to build out our own toolset within finance and insurance. We'll continue to build out the web services that we have, so that every function that we offer a dealership in-store, we can also deliver to a third party. We're signing up dealers at this show for embedded credit application. So we're excited about that, and we have GM Financial and Ally organized as our first two pilot lenders for our embedded eContracted service.