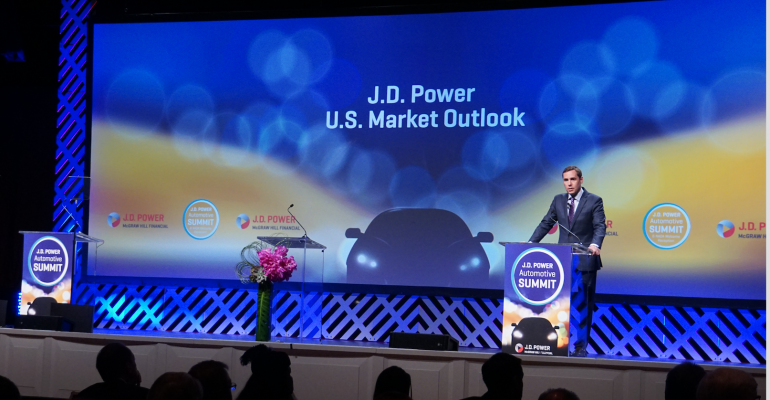 Incentives, loan rates and leasing are on the rise and could pose problems for industry profitability in coming years, data and analytics firm J.D. Power says.

LAS VEGAS – Retail sales and consumer spending on new vehicles will continue to rise through 2017 in the U.S, but there are troubling warning signs for the industry just the same, says forecaster J.D. Powers.

U.S. buyers snapped up 14.2 million new cars and trucks at retail (not including fleets and daily rentals) in 2015, up 700,000 units from 2014 and the best result since 2004, Thomas King, vice president-Power Information Network, says here at the J.D. Power Automotive Summit Thursday, just ahead of the opening of this weekend’s NADA Convention and Exposition.

This year, that number will be surpassed, King says, with retail volume hitting 14.5 million vehicles and climbing to 14.7 million in 2017.

Perhaps more importantly, consumers will continue to spend more for those cars and trucks. Last year, average transaction prices (after incentive costs) rose $600 to $30,600, with total spending on new vehicles a record $436 billion, up $29 billion from 2014. King expects that trajectory to continue over the next two years.

The bad news? Incentives are rising, the growth in leasing could seriously threaten profitability and loan terms are headed in the wrong direction.

Incentives, which King calls the biggest concern, account for 9.6% of suggested retail prices, up 0.7 points. That spending needs to rise only another 1.5 points to hit levels seen just prior to the last recession, he says.

Most of the incentive spending action is focused on cars, which are less in demand than trucks and car-based CUVs, the J.D. Power executive notes. Cars are averaging incentives at 12.3% of the suggested retail price, or $3,660, compared with 8.2% ($3,207) for trucks.

Car-leasing incentives equate to $6,710 per unit, evidence of the 8-point gap between supply and demand in that sector, King says.

Overall, the new-vehicle leasing mix has risen 3.6 points to 31.4% of retail. Some 1.8 million units will be returning off-lease this year and next, with 1.9 million due back in 2018. That could mean residual values fall short of plan, particularly if incentives continue to rise. Every one point of residual shortfall will cost the industry $1.8 billion, King says.

Loan lengths also are increasing, with 33% at 72 months or longer. Loans of 84 months now make up 5.4% of the industry’s portfolio, a 1.4 point jump from the previous year. Credit scores are falling, with 17.6% now below 650, an rise of 4 percentage points.

“That’s not a record,” King says, “but it’s moving in the wrong direction.”

Oversupply is another problem the industry is facing. Some 31% of new vehicles spend more than 90 days in inventory, well above the 30-45 days considered healthy.

“So that’s a pain point for retailers, particularly with the skinny margins (for dealers) on vehicle (sales),” King says.

“Discipline is critical to long term health of the industry,” King notes.