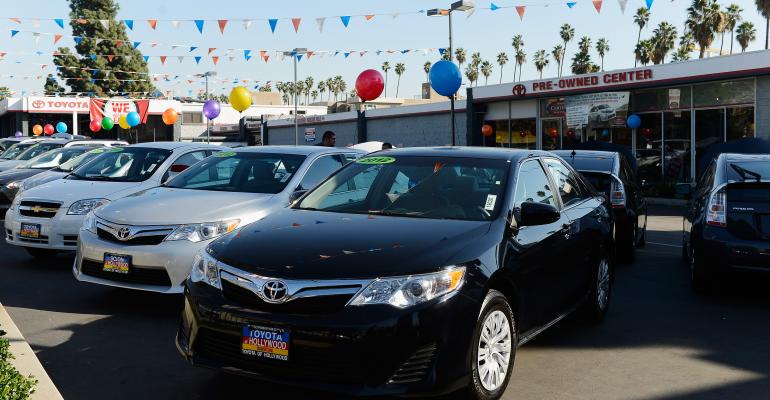 Party’s Over for High Used-Car Prices

Increased new-car incentives and a glut of off-lease vehicles hitting the market take a toll on pre-owned-vehicle operations.&nbsp; &nbsp;

LAS VEGAS – A record 3.1 million off-lease vehicles will flood the used-car market this year. Lots of them are cars that aren’t in demand in the CUV-crazy U.S. And automakers have been jacking up new-car incentives.

Those factors combine to make 2016 a down year for wholesale used-car prices, following a five-year streak marked by strong prices, hot demand and relatively lean supplies.

“Last year was another phenomenal year for used cars, with prices up 18% over pre-recession years,” says Jonathan Banks, a used-car auto analyst for the National Automobile Dealers Assn.

This year will be different though, with an expected 5%-6% drop in pre-owned vehicle prices, Banks predicts at a press conference during the 2016 NADA convention here.

Off-lease vehicles descending on the used-car market this year carry an 800,000-unit increase over 2015.

“Most of that volume will be dominated by compact and midsize cars,” he says. Those vehicle segments currently are among the softest in the industry.

Late-model used-car supply is expected to hit the highest level since 2008, and represent the biggest drag on vehicle prices, Banks says.

But new-car incentives will affect matters too. Automakers are expected to lay those on thicker than before to bolster new-vehicle sales that WardsAuto forecasts will reach 17.8 million units this year.

“Increasing new-vehicle incentives will put downward pressure on used-car prices,” Banks says. “Incentives have been creeping up since 2011.” Five years ago, industry incentives were 8.3% of MSRP. Now they are 9.6%, which Banks describes as “really high.”

Used-car prices could decrease even more than he currently predicts if automakers really step up new-car incentives such as rebates and sweet lease deals. “Incentives are the wild card,” he says.

He adds: “Leasing is fantastic. You get people returning to dealerships more often because of that 3-year churn. But you don’t want to go back to the 1990s when leasing was a drag on the used-car market.”

But such programs can only help so much. “CPO is not a savior,” Banks says.