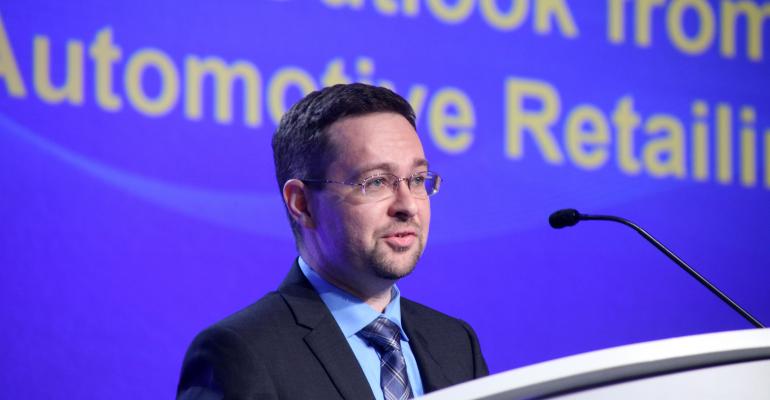 Rising incentives and the huge supply off off-lease vehicles returning to showrooms &ndash; many of them in unpopular segments such as small and midsize cars &ndash; are chief culprits in the profit pressure to come.

LAS VEGAS – Light-vehicle sales will remain relatively strong over the next several years, but industry profitability is likely to come under increasing pressure, analysts for the National Automobile Dealers Assn. concede.

Rising incentives and the huge supply off off-lease vehicles returning to inventory – many of them in unpopular segments such as small and midsize cars – are chief culprits in the profit squeeze to come.

“You have weak car sales and a lot of used cars coming back off lease, it’s not a good formula,” NADA Chief Economist Steven Szakaly notes here on the opening day of the 2016 NADA Convention & Exposition.

J.D. Power officials estimated Thursday that every one point of residual shortfall will cost the industry $1.8 billion.

Overall, the U.S. economy remains fairly healthy, Szakaly says, with only mild concerns around such things as the equities and housing markets and the outlook on industrial production. Wage and income growth has not been robust either and has failed to keep up with rising new-vehicle stickers.

“Prices are outpacing wage and income growth, and you can’t do that forever,” he says.

This year trucks will take 57% of the volume, Szakaly says, about even with 2015. “The U.S. market always has been a light-truck market,” he adds, but that’s part of what will pressure profitability over the next few years.

NADA says 3.1 million leased vehicles will be turned in this year, 800.000 more than in 2015. Many of those are cars booked with residuals that now appear inflated as new-vehicle demand has continued to shift toward trucks as fuel prices have sagged.

On top of that, used-car prices are expected to decline 5%-6% this year, NADA Used Car Guide analyst Jonathan Banks says, meaning there’s a greater likelihood automakers and their captive-finance arms will be left holding the bag for a bigger share of residual shortfall.

“The risk in leasing is being stuck with product consumers don’t want,” Szakaly says. “The way it is, with a lot of compact cars coming back, the people that will pay for it are the OEMs.”

New-vehicle incentives also are on the rise at 9.6% of the manufacturer’s suggested retail price, and overall have not been absorbed with rising transaction prices, which reached $34,000 at the end of the first quarter, NADA says.

With weak demand on the car side pushing up incentives and eroding residual values on returning leases, automakers are “stuck with a poor mix” at both ends of the market, Szakaly says.

Additional pricing pressure will come, particularly in the luxury-vehicle market, he says, as overseas automakers look to ship more units to the U.S. in light of weakening demand in some foreign markets, such as China.

Separately, NADA releases some of the details of its annual Dealership Workforce Study that continues to show high-turnover rates for some employees. Overall, turnover increased to 39% from 36% a year ago, but remains below the private-sector average of 44%.

Turnover for sales consultants, at 72%, is of biggest concern. Szakaly says the high level in part reflects the influx of Millennials, many of whom are discovering quickly they don’t like selling cars as much as they thought they would.

“We’re in a phase where talent is valuable, and we need to attract more people to this industry,” Szakaly says.