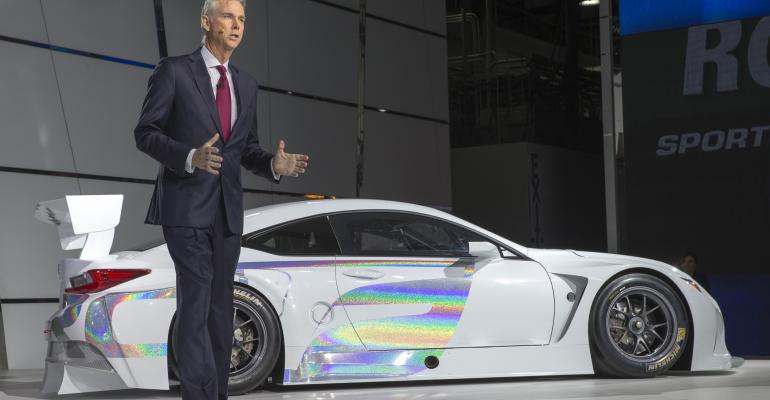 Eleven dealers have signed on for the LexusPlus program, which aims to bring luxury-level hospitality to the new-car showroom. The pilot project follows a growing industry trend among upscale brands to offer buyers more personalized, concierge-type services.

In its most recent attempt to revive Lincoln, Ford put the priority on developing an exclusive showroom experience under its Black Label program, well ahead of rolling out any all-new models for the luxury brand.

Here Thursday at the J.D. Power Automotive Summit, Hyundai Motor America CEO David Zuchowski says specialized sales and service is what will help separate the new Genesis luxury marque from the volume Hyundai brand, even though the vehicles will be sold side-by-side in the same showroom.

Also chiming in on the trend is Lexus General Manager Jeff Bracken, who tells the J.D. Power crowd his brand also is looking to step up the hospitality offered in its showrooms via a pilot program called LexusPlus.

“Luxury buyers say they want financial transparency, technology that makes the buying process simpler and a single point of contact (to complete their purchase),” he says. “So we listened.”

Eleven dealers have signed on to test LexusPlus, which promises no-haggle pricing and designates a single person to  take the buyer through the entire purchase process and subsequently oversee any follow-up service needed during the length of ownership.

Lexus has been working the past two years to develop the program and has spent the last six months or so training personnel at the 11 volunteer dealerships. The new sales approach will be launched in about a month, Bracken says.

The 11 dealers represent a mix of large and small markets around the country. Bracken says the program will need to run in trial form for about a year before Lexus has enough information to determine whether it can be expanded to other showrooms.

But a large percentage of the brand’s 236 U.S. dealers do not want to follow the no-haggle pricing strategy that’s the centerpiece of LexusPlus, Bracken admits.

“Many of our dealers are philosophically opposed (to standard pricing),” he says, adding the dealers believe they are the experts in retailing and shouldn’t be told how to do it. “So it’s not for all 236.”

The LexusPlus initiative is one of several moves meant to transform the brand, which include more daring designs for its vehicles, a new high-performance model in the LC 500 sports car and recent entry into motorsports via the newly launched F Performance Racing team.

“We need to take some risks, including stepping into a hospitality culture (through LexusPlus),” Bracken says.

In addition to fixed pricing, LexusPlus aims at shortening the purchase process, though no specific target has been set for reducing the time needed to close a sale from the current two to three hours.

“We don’t have a specific goal. We just know time has to be taken out of this process.”

Bracken acknowledges more than exceptional service will be needed if Lexus is to stay atop the luxury-vehicle segment in the U.S.

“Clearly we’ve got to come to market with emotional product,” he says.

Lexus executives are not “waking up every day to finish in second or third place,” Bracken adds. The brand won’t chase volume, but “if the industry moves, we want to move with it.”

However, that doesn’t mean heading down market with a sub-$30,000 CUV or sedan to better match some of its rivals, he says.