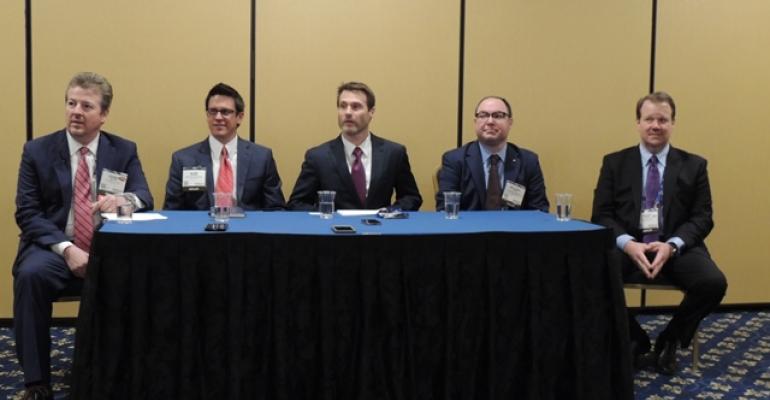 LAS VEGAS – Jason Kuhn of Kuhn Automotive Group in Tampa, FL, has three Volkswagen dealerships and is building a fourth.

“We probably have the largest U.S. dealer investment in VW,” he tells WardsAuto following a closed-door franchise meeting between executives of the embattled brand and hundreds of its struggling dealers at the National Automobile Dealers Assn. convention here.

The automaker’s diesel-emissions crisis has hurt VW dealers, particularly Kuhn because of his big investment in the brand.  He says a major issue now is how the company might compensate dealers to make them whole again.

“A vast majority of VW dealers sustained some financial harm, not unlike consumers who bought affected cars” he says at a post-franchise-meeting press conference held by VW dealer council members.

The company should resolve those dealer issues so the retailers can, in turn, better help consumers resolve their issues involving the ownership of cars that produce excessive tailpipe emissions, a fact that the company had covered up.

Kuhn is on a 5-member committee created by VW dealers with a goal of trying to reach a settlement with the automaker in an effort to recover financial damages sustained by VW’s 652 U.S. dealerships.

Dealers aren’t “looking for a handout” nor do most of them want to take the automaker to court, dealer Dennis Gaudet of AutoServ of Tilton (NH) says at the press conference. If dealers were so inclined, “we would have litigated a long time ago.”

Most members of the dealer body “do not believe it is in our best interest to take a litigation posture with our partners,” Kuhn says. “Collaboration is a better solution.”

But he adds: “I can’t promise every dealer is going to be on board with that strategy.”

Several people at the franchise meeting describe the tone as civil and business-like. “There were no tomatoes thrown,” says an attendee who asked not to be identified. “Some people were enthusiastic, others less so. Some had a greater sense of urgency than others.”

“It felt like we got a lot of heavy lifting done,” says Alan Brown, the head of the dealer advisory council and is a VW dealer in Lewisville, TX, near Dallas.

VW brand CEO Herbert Diess tells journalists after the franchise meeting that it was a good session.

“There were many questions,” he says.” There are many challenges for the dealers. I think we had a positive, constructive atmosphere and we’re looking forward to managing through the crisis and really re-launching the brand.”

Dealers say they want to sell their way out of the woods, meaning they want the automaker to provide them with a wider range of product.

A redone Tiguan CU V is due in 2017. So is a new CrossBlue CUV hybrid, with production scheduled to begin this year at the VW plant in Chattanooga.

Dealers say they are anxious to start selling the all-wheel drive ’17 Golf Alltrack crossover Sportwagen due out later this year.

Diess at the meeting conveyed the impression “he understood the demand for an all-wheel drive wagon” and vowed to increase production, says dealer council member Michael Difeo of Linden VW in Roseville NJ.

“We want to go after a significant market share of Subaru,” he says of a Japanese brand competitor with a full lineup of AWD vehicles.

Not all VW dealers at the franchise meeting felt it went well.

“I guess it would be titled ‘more of the same and nothing that matters,'” says VW dealer Steve Kalafer of Flemington Car and Truck in Flemington, NJ.

“They didn’t have any solutions and had no specific answers regarding what would take place for our customers or for dealers,” he tells WardsAuto. “It’s more of the same, like the movie ‘Groundhog Day.’”

VW has struggled to manage the crisis resulting from a scandal that broke when it was learned the company used special software to scam diesel-emission tests. The resulting debacle has hurt the brand’s image, affected sales and made VW the target of regulatory and legal action.

“VW miserably failed," says Max Zanan, managing director of IDDS Group, specializing in dealership and OEM consulting. “They had so many opportunities to do the right thing.

“They could have brought in a new CEO from another company, an outsider, somebody to change the culture. (Instead) they appointed a guy who has been with the company for 20 years. So I don’t think it’s realistic to expect any cultural transformation.”

His advice to VW dealers: “Either get really good at selling used cars, because that’s what’s going to keep them afloat” or “change your franchise. Get a Subaru (franchise). You’ll be better off.”