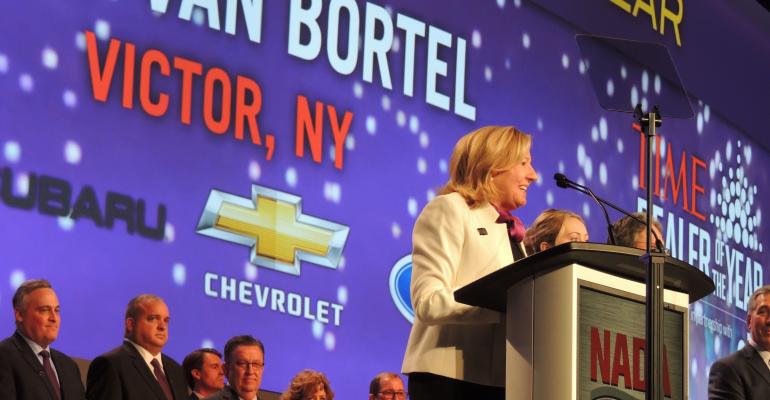 Dealer of the Year Had Humble Start

Kitty Van Bortel once sold used cars in the front of a rented house. She&rsquo;s now Time Dealer of the Year in partnership with Ally.

LAS VEGAS – The daughter of a dealer, Kitty Van Bortel struck out on her own by renting a house, living upstairs and selling used cars in the front of the property.

She convinced Subaru to give her a franchise in 1991. The owner of Kitty Van Bortel Subaru in Victor, NY, later opened Ford and Chevrolet stores in upstate New York.

A nine-year breast cancer survivor, she’s done much for the auto industry and her community, supporting causes such as cancer research, a homeless shelter and a job-placement program for military veterans.

Her efforts are recognized at the National Automobile Dealers Assn. convention here as she is named the 2016 Time Dealer of the Year in partnership with Ally.

In a general assembly speech after winning the award, she recognizes her family, including “my mother, who is my hero, and my father who taught me about the car business.”

She adds: “I’d like to say it is about time women get recognized in the business. It is time we really get women in strong positions at dealerships.”

Fifty dealers from throughout the nation were nominated for the dealer-of-the-year award. Finalists included:

“This is an extraordinary group with uplifting stories,” Tim Russi, Ally’s president-auto financial, says of the 50 nominees on stage with him. “They equally love the auto industry and their communities.”