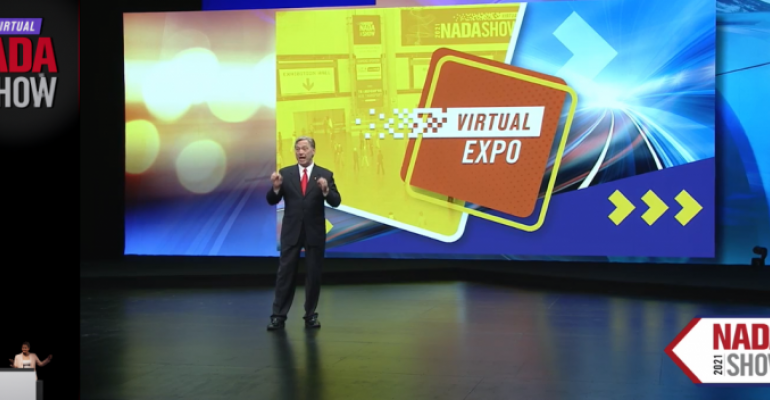 “No playbook was ever written for 2020,” says Rhett Ricart, outgoing NADA chairman. “No one could have envisioned the strongest disrupter ever: COVID.”

Less than a month after that speech, the COVID-19 pandemic kicked in across America, deeply and darkly disrupting society.

“We just lived through a year we’ve never seen before,” Ricart says Tuesday during his chairmanship farewell speech at the trade group’s annual 2021 convention, held digitally for the first time.

Throughout 2020, dealers adapted to utterly unforeseen circumstances, continued to sell and service vehicles and watched nervously as spring sales plummeted. But they breathed easier when the sales year finished relatively strong (14.46 million deliveries, according to Wards Intelligence).

Topsy-turvy 2020 made dealers “stronger, tougher and a little wiser,” says Ricart, president and CEO of Ricart Automotive Group in Columbus, OH. “No playbook was ever written for 2020. No one could have envisioned the strongest disrupter ever: COVID.”

To cope with the abnormal business environment, dealers became “life preservers, contortionists and survivors,” he says.

“Never forget what we went through, because it shaped who we are today,” Ricart tells dealers, calling them “a bulletproof band of brothers and sisters.”

When the health disaster hit, NADA rallied and refocused on the single goal of steering franchised dealers through the pandemic, he says.

“This association has never fought harder, worked faster or given so much of itself so that business owners, like you and me, had a franchise that remained valuable and protected.”

Of dealers, he says: “Despite the darkest days, we kept people on the payroll, we reformulated our business model, we prioritized the health of customers, employees and our families, and we continued to sell and service cars.”