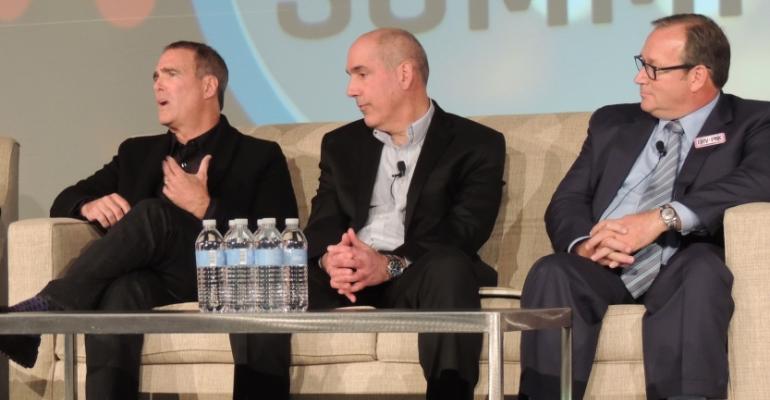 AutoNation Will Brand Its Own Auto-Parts Line NEW ORLEANS – The auto executive sitting next to him on a conference stage doesn’t blanch but he doesn’t seem thrilled either when Bill Berman says AutoNation will introduce its own line of auto parts soon.

“We’ll be branding our own parts, and using our data base of customers” to sell them, Berman says during a panel discussion at the J.D. Power Automotive Summit held here in conjunction with the National Automobile Dealers Assn.’s annual convention.

AutoNation ranks No.1 on the WardsAuto Megadealer 100 with $20.8 billion in total revenue and 431,983 new- and used-vehicle sales.

When the dealership chain first got started in the 1990s, some edgy automakers feared AutoNation might come out with its own car brand. That obviously never happened. But branding its own auto parts shows what a major publicly owned dealership chain can do.

It’s also a way to widen the revenue stream at a time of squeezed profit margins on new cars. Berman says another way is to stoke up accessory and customization business.

“It is clear dealers will have to find alternative ways to sell new and used vehicles,” says Pollak, chairman and founder of vAuto, a Cox Automotive brand that provides inventory-management software to dealers. “I’d definitely look towards digitalization of the process.”

He says a primary concern he hears from dealers is “pressure on their margins, and how supply and demand issues can accelerate that.”

Not even the most bearish prognosticators foresee a sales crash of the magnitude of last decade. That’s when vehicle sales plummeted from 16.2 million units in 2007 to 13.4 million in 2008 to 10.6 million in 2009.

He joins many other auto retailers in denouncing some automakers’ dealer incentive programs that he calls “almost predatory.”

Particularly egregious to Berman are so-called stair-step incentives. Those are intended to move the metal, but they often spur dealers to sell cars at deeply discounted prices at the end of a month in order to meet quotas and earn all-or-nothing bonuses.

With Hill at his immediate right, Berman makes a point of noting GM is not one of the stair-step offenders.

About 3.3 million vehicles are coming off lease this year. Automakers face challenges in remarketing such large numbers.

“Leasing is one-third of sales, and I’m not sure how much higher it can go,” Berman says.

“You’ve got to find the right balance,” Hill says, adding that GM’s lease rate is 23%, lower than the industry average.

Leasing used cars has been a theoretical topic of industry discussion for years. With those waves of off-lease vehicles coming back, now might finally be the time to implement used-car leasing, Pollak says.

Hill isn’t so sure, citing depreciating values of aging vehicles. “You’d be surprised,” he says. “If you get your calculator out, it is very difficult to get a used-car monthly lease payment that isn’t close to a new-car lease payment.”

Still, Pollak wonders where automakers’ remarketers will find the space to put those millions of off-lease vehicles making the scene this year.