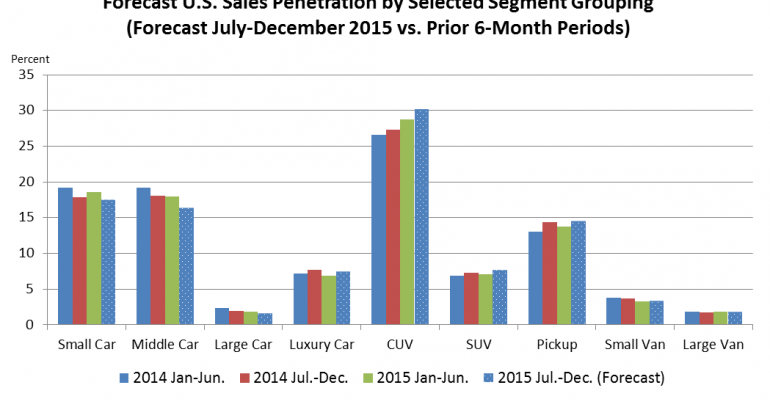 Cars could be the catalyst that propels sales well above 17 million if automakers turn to incentives or fleet deliveries to stop their decline.

Deeper analysis of first-half 2015 U.S. light-vehicle sales indicates the industry is on track to reach 17 million units this year.

Based on seasonal trends, particularly in years when demand continues rising in the second half of the year from the first six months, which WardsAuto expects for this year, it’s almost inevitable that 2015 will end with volume of at least 17 million units.

First-half sales totaled 8.49 million units, 4.4% above year-ago. And in years with ongoing growth (based on seasonally adjusted annual rates), the second half usually outdoes January-June volume.

However, 17 million is not guaranteed. For one, average transaction prices still are rising year-over-year to new records every month, which could cap the number of potential buyers, especially in the fourth quarter when ’16 models are in wide availability along with nearly across-the-board price increases.

Furthermore, despite recent strong employment increases, wage growth remains tepid, meaning more consumers entering the market might choose used vehicles over new ­-- and there a lot of good used vehicles are coming off leases this year.

A potential increase in interest rates by the Federal Reserve in September could have a limiting impact on Q4 as the rise trickles down to new-vehicle loans and leases, in effect, raising prices.

Another potential limiter is fleet volume. After posting strong year-over-year gains in second-half 2014 and Q1 2015, sales to fleet buyers have weakened in the past couple months and could be flat over the remainder of the year.

Also, there will not be as much fresh product as in recent years to help drive demand. There are some significant new or redesigned products coming in the second half, especially in Q4, but sales penetration of fresh vehicles has dropped to a 5-year low and is expected to stay there through the end of 2015.

Nonetheless, there are good reasons to support 17 million.

Even if tepid, employment and wage growth should be a boost to volume, especially when combined with the latent demand created by the recession that WardsAuto estimates will last through 2016.

Interest rates remain low, and if increased, are not expected to have much of an impact on 2015.

Off-lease volume likely will enhance sales because the majority of buyers transition into another new vehicle. Sources vary on the exact number, but roughly 2.5 million consumers are coming off leases this year for the highest turnover in five to six years.

Fuel prices, despite recent upticks, remain relatively low and are expected to stay that way, cutting less into disposable income.

Furthermore, inventory ended last month higher than the same year-ago period for the first time since October. Unlike the year-ago summer, when inventory got out of balance with demand, the increase is justified this year. Even though inventory is up, days’ supply is relatively even with last year and the sales-to-inventory ratio is actually higher.

The inventory mix also is mostly in line with demand.

The inventory total includes a near doubling of Small and Small Luxury CUVs over last year. Combined sales of the two segments were up 28.5% in first-half 2015, compared with same-period 2014, and includes five models not available a year ago. The segment gets more fortified in the second half with a redesigned Hyundai Tucson and all-new Mazda CX-3 on tap.

The emergence of small-size CUVs has only exacerbated the shift from cars to light trucks.

Cars ended first-half 2015 with sales penetration of 45.3%, lowest on record for the period, and are on track for penetration under 43% in the second half. In fact, second-half car deliveries are forecast to decline nearly 4% from July-December 2014, with the biggest losses in midsize and large sedans.

Except for Small Cars, all car segment groups recorded 6-month volume below year-ago, and are forecast to continue that trend through the rest of 2015. Small-car sales increased only 1.2% and are forecast to be flat with year-ago over the remainder of the year.

Incentives Could Play a Bigger Role

However, cars could turn into a catalyst of sorts that propel LV sales for the year well above 17 million. Automakers mostly have kept control on incentive spending, but cars could be where spiffs noticeably tick up over the remainder of the year, especially among midsize sedans.

Cars mostly are to blame at manufacturers with market shares flat or below year-ago levels and some might decide to stop the bleeding by pushing more volume through artificial means.

Production slowdowns will continue as a way to keep inventory in line with demand, but at a certain point some automakers might decide assembly lines have been slowed enough and increase retail inducements, or even push additional fleet volume, as alternatives.

Another segment group to watch for incentives is pickups.

Inventory of pickups ended June 12% below year-ago while year-to-date sales were up 10%. Only FCA had more inventory than last year.

Pickup inventory is not seen getting on par with year-ago levels, but less availability might not keep competition from getting more heated, especially in Q4, which over the past three years has been the highest volume quarter for the vehicles.

With the new Ford F-150 getting close to full availability, General Motors, with the initial flush of volume that comes from redesigned products largely over, has done some freshening to its ’16 Chevrolet Silverado and GMC Sierra, just two years after their last re-engineering. That seems to indicate GM is not ready to yield much segment share in the face of new trucks from the competition.

Also, though not a major player in the segment, Nissan’s next-generation Titan hits dealer lots in November, stirring the pot some more.

Small pickups, too, are part of the picture. GM’s new Chevrolet Colorado and GMC Canyon likely are encroaching somewhat on the Large Pickup segment, and the redesigned Toyota Tacoma starts deliveries in October.