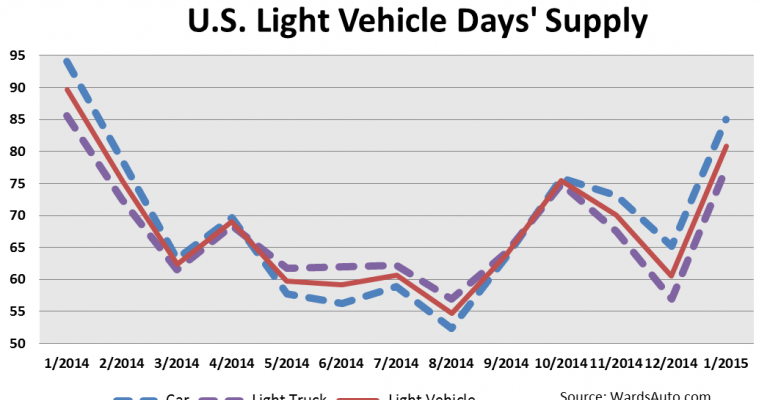 One caveat, though not a big one, is year-ago inventory levels were temporarily higher due to sales hampered by severe winter conditions across much of the market in January and February. The lost sales were recouped in the spring, and inventory evened out, but January 2015 stocks would be about flat with year-ago if not for the weather-related effect.

Inventory ended January at 3.56 million units, compared with 3.61 million a year ago, and 2.1% above December’s 3.49 million. Days’ supply ended the month at 78, a healthy total for January, and well below year-ago’s 90.

By vehicle type, car inventory ended January at a significantly high 82 days’ supply, while trucks finished at a rather low 74.

Truck segments with some lean vehicle stocks include Middle CUV, Large SUV, Large Luxury SUV and some Small Pickup. Stocks of the Small Van segment, up 37% from year-ago, appear in excess only because FCA US (formerly Chrysler) built extra inventory prior to the 3-month shutdown that begins this month at its Windsor, ON, Canada, plant to do early tooling for future vehicles.

Conversely, car segments where trimming could be done include Lower Small, Lower Middle and Lower Luxury.

Of the Top Six companies in the U.S., four have inventory below year-ago levels. One of the two above year-ago, FCA, is relatively even with year-ago when taking into account the aforementioned excess minivan stocks. The other is Nissan, which is coming off strong year-over-year sales gains in January and entire-2014.

Inventory of domestically made LVs ended January at 2.93 million, nearly flat with year-ago, and equal to an 80 days’ supply, down from year-ago’s 93. LV share of domestic stocks equaled 82.2%, highest for the month since 2006.