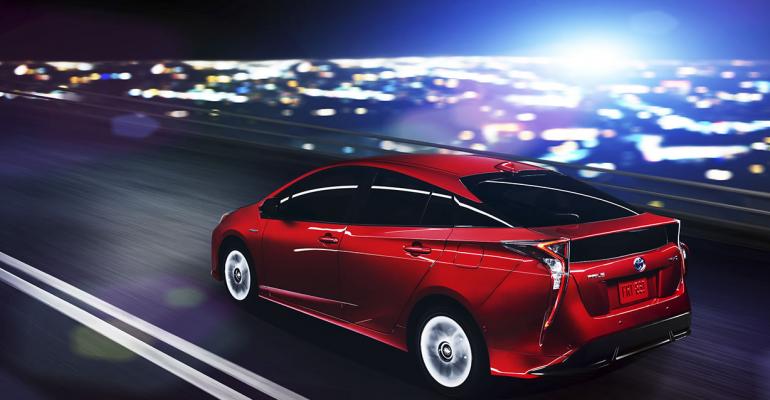 Production will be divided evenly between Li-ion and the NiMH batteries Toyota has used nearly exclusively until now. Sales of cars with the two battery types will be further split 50-50 in North America and Japan.

TOKYO – Toyota reveals more details of its new Prius, the automaker’s first hybrid to be powered by a lithium-ion battery as well as the nickel-metal-hydride battery nearly exclusive to the car’s three previous generations.

Chief engineer Kouji Toyoshima tells WardsAuto on the sidelines of the Tokyo auto show that production will be divided evenly between Li-ion and NiMH batteries. Sales of cars with the two battery types will be further split 50-50 in North America and Japan, while Toyota will offer only NiMH-equipped Priuses in Europe. China and Southeast Asia still are being decided.

Model grade will determine which type of battery is used, Toyoshima says.

Only the Prius Plug-In Hybrid and one grade of the Prius v (sold in Japan as the Prius Alpha) now use Li-ion batteries, the choice of other automakers for most electric vehicles and some hybrids. Li-ions have higher energy density but Toyota has relied on its proven, lower-cost NiMH technology.

At the Tokyo show Toyota still does not confirm reports the Li-ion battery will be available in the Prius’s new Eco grade, which has been rumored to be the highest-mileage grade version of the car with a 60-mpg (3.9 L/100 km) rating.

The NiMH battery pack is 10% smaller and holds 28% more energy than the current unit. The Li-ion pack is smaller still by an estimated 15% and significantly lighter, by nearly 15.8 lbs. (7.2 kg).

Li-ion batteries will be supplied by Toyota subsidiary Primearth EV Energy, which to date has supplied all of the NiMH batteries for the 8 million hybrids the automaker has sold since 1997.

The fourth-generation Prius goes on sale in Japan in December, followed by North America in early 2016. Pricing details won’t be announced until next month, but no change is expected: ¥23.9 million ($19,700) in Japan and $24,000 in the U.S.

Toyoshima says the car, which took more than six years to develop, features all new parts, many of them 20% or even 30% smaller. Powertrain components are touted as up to 30% more powerful. The Prius and other models in the Prius family including the Prius v and Prius Plug-In Hybrid will share Toyota’s new TNGA global architecture framework.

The automaker estimates it has achieved 5% fuel-efficiency gains for the engine and hybrid system, 3.2% for the motor, 2.6% for the transaxle and 2.4% for the power control unit.