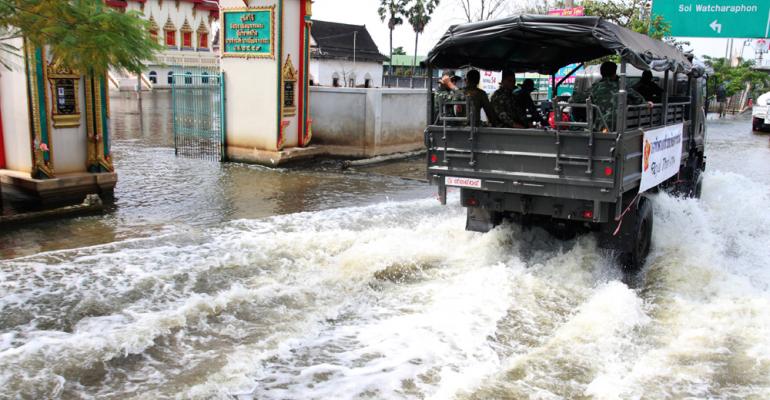 Thailand Auto Industry Back on Track After Floods

An ambitious forecast is that Thailand in 2014 will increase auto production to 2.4 million units, 1 million more than in the year of the flood.

Thais still talk about how the floods set back industry, particularly the once-ambitious 2011 automotive production and sales goals.

“Growth dropped off because of the flood,” says Vasana Mututanont, deputy secretary general for the Board of Investment, a unit of Thailand’s Ministry of Industries. “Water was with us, here and there, for three months.”

Vehicle output went from 1.6 million units in 2010 to 1.4 million last year, which was supposed to have been a banner year. Half the units made in Thailand are exported, mostly to other Asian countries such as Japan, which maintains a strong automotive presence here.

The Thailand gross domestic product grew only 1% last year, primarily because of the floods. A recovery is expected to increase the GDP 4.9% this year and 5.6% next. An ambitious forecast is that Thailand in 2014 will increase auto production to 2.4 million units, 1million more than in the year of the flood.

Seasonal flooding is a normal part of life in areas of Thailand north of the sprawling main city of Bangkok. Runoff water annually travels down from the high land and finds its way to the sea. But no one was prepared for the frightening monsoon-driven overflows of last year.

Awash on what once were lowland rice paddies in the province of Ayutthaya, a Honda Fit assembly plant was forced to close.

“Most of its machinery was destroyed,” says Preecha Leelawilailak, vice president of the Thai Auto Parks Manufacturers Assn. Deemed unfit for sale were newly produced vehicles that were in flooded storage lots at the plant.

Only two of Thailand’s 13 auto plants are in the region affected by the floods. But several tier 2 and tier 3 suppliers were hit.

They are small outfits, but their inability to produce parts threw off the entire supply system, which is intricately interdependent. If small suppliers can’t make parts, it denies auto makers what they need to build vehicles.

So even though they were far from the flooding, major auto-supplier and assembly plants in the Eastern Seaboard industrial region southeast of Bangkok were affected by it.

Without enough parts, those factories cut production and scrambled to find alternative suppliers.

The catastrophe had global reach. As the flooding in Thailand continued, several Honda suppliers were unable to maintain production. That disrupted the flow of parts to North America, causing Honda to cut output at all six of its plants in the U.S. and Canada.

All told, the flood cost the auto maker the production of 260,000 vehicles.

One Thailand factory away from the flooding but still affected by it is the General Motors assembly plant in Rayong. The facility spends $1.3 billion a year on parts, goods and services. It held out for so long before it had to cut production for lack of supplies.

“And we never laid off any workers here in Rayong. We sent people to the flood-damaged communities to help with sandbagging, delivering free water and constructing portable lavatories.”

Aiding needy people and working for a company that encouraged such an endeavor deeply affected GM’s Rayong workforce. “You can’t imagine the kind of solidarity this created,” Apfel tells a group of visiting journalists. “It was the most defining moment in pride and perspective that we went through in 10 years.”

Some of the smaller parts makers here still are hurting, although the flood waters have long abated. “Tier 1 companies have deeper pockets and can sustain the hit of something like this,” Leelawilailak says. “Tier 2 and 3 companies aren’t usually in that position.”

But overall, “everything is better and better,” he adds. “We expect a full recovery by the end of June.”

In Bangkok, a city of 8 million people, water levels rose dangerously high. There was some sporadic street flooding. But it never reached the destructive scope and persistent levels that hit areas to the north.

As Bangkok residents realized the extent of the nearby disaster, they erected defensives consisting of hundreds of thousands of sandbags.

“For a while, sandbags became one of the most expensive commodities in Bangkok,” Duangjai Asawachintachit, deputy general secretary of the Thailand Board of Investment, tells WardsAuto.

The flooding was compounded by human error. Various local authorities at first failed to realize how bad it was, the investment board’s Mututanont says.

“No one expected a monsoon like that,” she says. “Some local governments weren’t adequately taking care of water levels at dams. They didn’t release the water right away, because they worried farmers would later complain about not having enough for irrigation.”

When local authorities finally released the fast-accumulating dam water, it was too much for canal systems and other waterways to handle, and the flooding began taking its toll on life and property.

In sheer destructiveness, it wasn’t as sudden and horrific as the earthquake and tsunami that hit Japan earlier in the year, but the Thailand flooding took its own set of prisoners.

If mistakes were made, lessons also were learned, Mututanont says. “The local water management in each of the seven provinces involved was not harmonized. People were taking care of their own, not seeing the big picture.”

Now, the central government is determined to coordinate water-management efforts to avoid a repeat of that disaster. Thailand is consulting with Japanese and Dutch water-control experts. New anti-flooding infrastructure is planned.

“It was a big, important experience for Thailand,” Mututanont says.

And for auto makers such as GM.

“Every kid will tell you that learning can be painful,” Apfel says. “What we learned is that first you fight the crisis at hand by managing the production slowdown, deploying employees to help the victims and finding alternative suppliers.

“It helps you to develop a crisis plan. You will not know exactly what the next crisis will be, and it is ill-advised to plan for specific incidents,” he says. “But you learn to prepare to deal in general with a crisis. You sharpen your sense of knowing exposures and realizing that stuff can happen.

“Now, everyone here understands contingency planning is not just a hobby.”