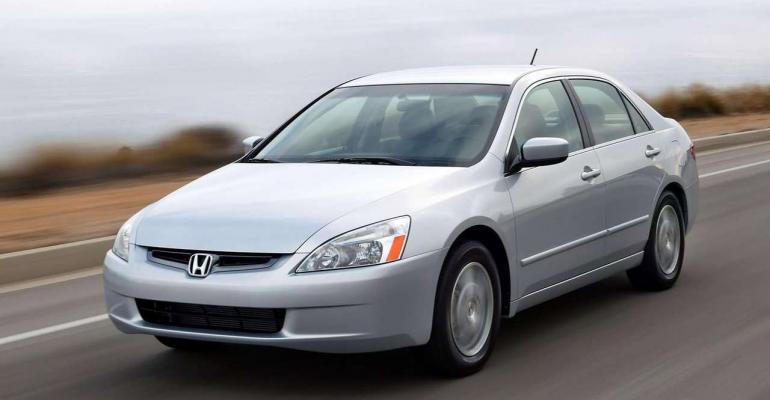 Second Time's the Charm for Accord Hybrid

The first Accord Hybrid &quot;pales in comparison&quot; with the new model in terms of technology and fuel economy, Honda&#39;s U.S. sales chief says.

DETROIT – Honda again will offer a hybrid as part of its new, ninth-generation Accord lineup, due later this year.

But unlike the first-generation Accord Hybrid, Honda has the right recipe for success the second time around, a top American Honda official says.

The difference between the old Accord Hybrid, which sold from 2005-2007, and the upcoming '13 model, a plug-in variant, is "chalk and cheese," John Mendel, executive vice president-American Honda, says in a recent interview here. The first Accord Hybrid "pales in comparison" with the new version.

The second-generation Accord Hybrid will be a full hybrid, able to travel exclusively on electric power for up to 15 miles (24 km). Electric-only is one of three modes drivers can choose in the new plug-in, which has two motors and a 2.0L Atkinson-cycle 4-cyl. gasoline engine.

Although it was an "asphalt-burner," Mendel says, the original V-6-powered Accord Hybrid failed to put enough emphasis on fuel economy when that became the key selling point for gas-electric hybrids.

Mendel says IMA is not dead, maintaining that Honda will keep the technology for compact or subcompact vehicles. The new Civic Hybrid, which went on sale last year, still uses IMA, as do the Insight and CR-Z dedicated hybrids.

While American consumers seem largely disinterested in hybrids, with the segment’s market share hovering at 2% of total industry sales despite plentiful offerings, Mendel says they are an important tool for auto makers needing to meet forthcoming U.S. corporate average fleet fuel economy targets of at least 35.5 mpg (6.6 L/100 km) by 2016.

"There's only a couple things you can do: (reduce) size/weight (or employ) alternative powertrain technologies," he says.

Honda is not totally wedded to hybrids as the solution to meet 2016 rules. Vehicles such as the Civic Natural Gas and hydrogen-powered FCX Clarity fleet demonstration model also are in its portfolio, as are gasoline direct-injected engines and continuously variable transmissions.

The auto maker will offer a DI engine and CVT in the ’13 Accord, as well as a V-6 engine option.

The decision to put a V-6 in the next Accord, while other auto makers such as Ford and Hyundai have gone exclusively to 4-cyl. in their midsize sedans, is just smart business, Mendel contends.

But Mendel thinks that despite higher gas prices predicted for 2012, fuel efficiency is a hard sell for most Americans, who have become accustomed to paying more at the pump. "It's kind of like a punch in the face: After the first (price spike), you kind of go numb. The first one really hurts and the second one hurts less. The third one you're like, 'Yeah, OK.'"

Mendel believes gas prices in the U.S. will not fall below $3 a gallon again. "It's a finite resource."

Some oil analysts predict regular unleaded may reach $5 a gallon this summer, citing the improving economy, Iran's threat to close the Strait of Hormuz shipping lane, the European debt crisis and continued demand in China and other developing countries.

CEO Says Honda Not Falling Behind in Technology
Jan 30, 2012