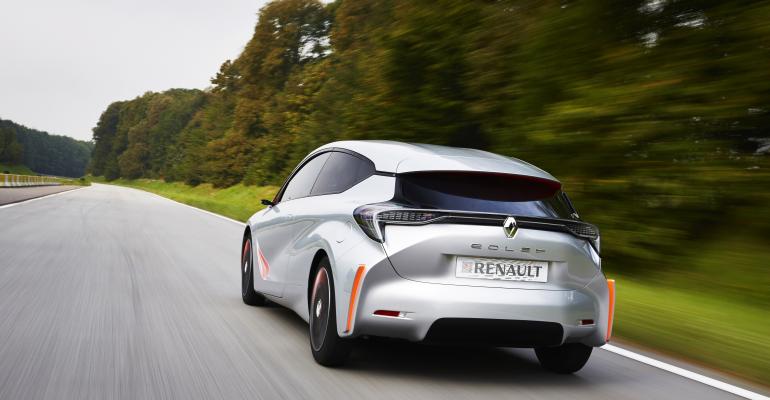 Volkswagen reportedly has been working on similar technology and may show off a similar concept in Paris. But Renault wants to be the first automaker to offer a B-segment compact family car that delivers 235 mpg and can carry four people.

Volkswagen reportedly has been working on similar technology and may show off a similar concept. But Renault wants to be the first automaker to offer a B-segment compact family car that delivers 61 miles (100 km) on 0.26 gallons (1.0L) of fuel and yet carry four people and luggage.

The Eolab show car also is Renault’s public answer to the question how a next-generation Clio minicar with the automaker’s Z.E. Hybrid powertrain technology can slash current carbon-dioxide emissions of 99 g/km to a mere 22 g/km (on the official New European Driving Cycle).

The key elements of the equation are well known: minimum weight, minimal air resistance and maximum fuel efficiency. The new challenge is providing adequate room for four to five passengers traveling in comfort at a cost that makes economic sense taking the bodywork, powertrain and other components into account.

The design and engineering team has met that challenge, Eolab project leader Laurent Taupin says: “The savings achieved by taking a fresh look at the size of the different mechanical assemblies enabled us to cover the cost of using more expensive materials and technologies elsewhere without losing sight of the aim not to add to the overall cost.”

Renault calls the Eolab concept a practical B-segment car featuring some 100 innovations that could be implemented in large-scale production this decade.

The aerodynamics are designed to let the car slice through air while movable devices such as an active spoiler and lateral vanes work as ailerons. The result is a drag coefficient of 0.235 and a 30% improvement in air resistance over the recently launched Clio IV. Renault claims this returns a saving of 2.8 mpg (1.2 L/100 km) at a constant speed of 80 mph (130 km/h), the speed limit on most European motorways.

The electric motor, integrated into the clutch casing of the innovative 3-speed gearshift and mated to a 0.9L 3-cyl. internal-combustion engine, generates 76 hp with 36 miles (60 km) of range. The Eolab accelerates to 36 mph (60 km/h) in first gear and up to 72 mph (120 km/h) in second gear. The battery pack recharges under deceleration, allowing for a day of city driving on a full charge. The battery stores the equivalent of 6.7 kWh.

The software associated with the powertrain can switch from stop-and-go “city” to open-road “weekend” operating mode. On a 149-mile (240-km) drive from Paris to Tours, for example, the car will take off under electric-only power but the internal-combustion engine will start and keep running at a low, constant, speed unless more power is required.