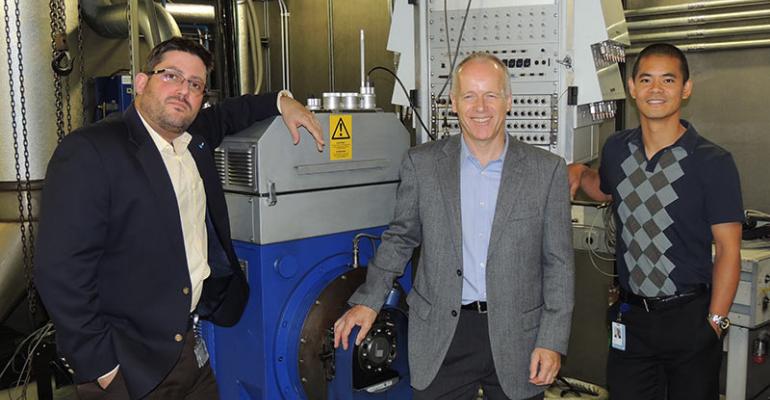 After four years at its Michigan tech center, IAV&rsquo;s four dynamometer test cells are fully occupied, and the supplier wants as many as four more. The facility can run every engine test cycle used in every region of the world.

NORTHVILLE, MI – IAV is an engineering-services company founded in Berlin in 1983, expanding to the U.S. in 1998 and establishing a North American headquarters and powertrain testing facility here in 2009.

The timing couldn’t have been better to invest $35 million in the U.S., as the auto industry was about to roar back from a devastating recession and dozens of bankruptcy filings from parts makers, as well as General Motors and Chrysler.

In June, the supplier added a location in Auburn Hills, MI, which includes capabilities for hardware-in-loop testing. More than 15 people occupy the office, and headcount is expected to reach 25 by year’s end. The supplier plans to grow this number to 50 in 2014.

“They committed to investment in 2008 at a time when the bottom fell out of the industry,” Ridgway says. “They stuck with it and realized things would come back.”

After four years at its tech center here, four dynamometer test cells are fully occupied, and Ridgway says as many as four more are needed. The facilities were laid out with infrastructure for 12 test cells, and there is space for new brick and mortar. A multi-channel high-voltage battery simulation test cell also was added this year.

The four test cells are available to run two 8-hour shifts daily. “In 2012, we were overutilized,” Ridgway says. “We ran over 16 hours a day five days a week” and exceeded 100% capacity utilization.

The facility can run every engine test cycle used in every region of the world. Some tests last 30 seconds, some several weeks.

Last year’s workload was driven largely by diesel-emissions testing. About 60% of IAV’s global revenues stem from work dedicated to gasoline and diesel engines.

This year, capacity utilization is down to about 85% because of a wider range of customer projects that require more setup time. While last year’s focus was on diesel, this year’s work in the test cells is split almost evenly between gasoline and diesel projects, the supplier says.

Still, IAV is convinced more testing facilities are necessary, particularly a chassis dynamometer to accommodate a full vehicle. “We have the business to support it,” says Rob Till, director of operation.

If the expansion includes engine test cells, they would not resemble those already in place here. “Maybe they would be more focused on electrification,” Till says.

IAV currently is investing in state-of-the-art testing facilities in Ingolstadt, Germany, that integrate wind tunnels and can be used for evaluating all-wheel-drive powertrains. “We need to see how it goes in Germany and see how the market develops here,” Ridgway says.

He is eager to see construction begin on the new facilities. Negotiations are under way with partner suppliers, and two primary options are being reviewed. Once construction begins, “it would be 16 to 18 months before we are up and running,” Ridgway says.

He says IAV needs to grow outside Germany, where it owns more than 60% of the domestic market for outsourced engineering and R&D for customers such as Daimler, BMW and Volkswagen.

VW owns 50% of IAV stock, while suppliers Continental and Schaeffler own 20% and 10%, respectively. 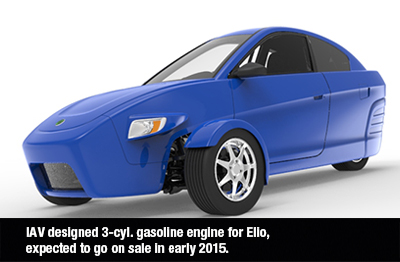 “Get outside Germany and we have less than 2% of the global market,” Ridgway says. “That’s why we’re here. We have some strong global growth targets as a group. We here in North America are the key first major international subsidiary, the first tech center outside Germany, the tip of the spear, if you like.”

Part of that growth will come from developing electric vehicles.

IAV also designed the 3-cyl. gasoline engine powering Elio Motors’ 3-wheel vehicle, which is expected to go on sale in early 2015, priced at about $7,000. Prototype powertrains will be available in second-quarter 2014.

Elio Motors purchased General Motors’ Shreveport, LA, plant to paint and assemble the vehicle. The startup company expects the 2-seat, front-wheel-drive vehicle to be capable of 84 mpg (2.8 L/100 km) on the highway, making it popular with commuters.

Engineering-services companies want to grow at a time when automakers are consolidating powertrains and developing fewer unique engines. That scenario would suggest IAV is overly optimistic about the future.

But Ridgway says it was common not long ago for an automaker to produce more than 600,000 units of a particular nameplate requiring just two engine variants.

“The market has fragmented tremendously in the last 15 years and will continue to do so,” he says. “We will see different niche vehicles with niche powertrains, and they all need to be developed. And the challenge of emissions and fuel economy will be getting greater as well.”