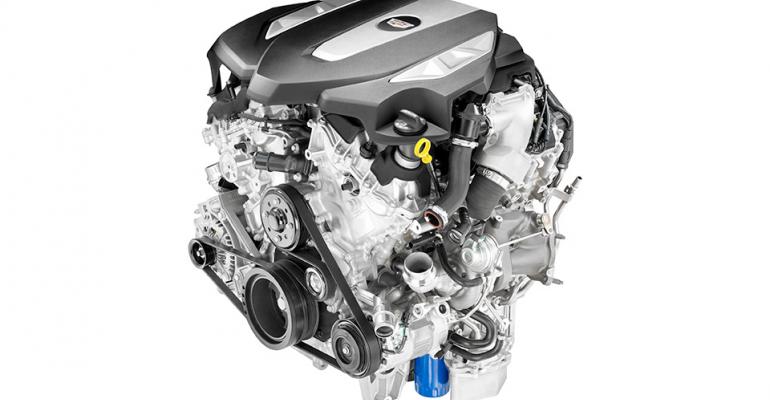 The offensive will begin with a Cadillac-exclusive 3.0L twin-turbocharged gasoline V-6 for the all-new CT6 large sedan bowing at next month&rsquo;s New York Auto Show.

DETROIT – A new lineup of powertrains kick-starts a $12 billion investment by General Motors into Cadillac, an overhaul of the water-treading brand intended to put it in the league of more widely revered luxury automakers such as BMW and Mercedes-Benz.

“It is going to require a broader range of powertrains than we have today,” says Dave Leone, executive chief engineer-performance cars at GM. “We’re going to have 4-cyl. (engines), 6-cyl. (engines), gasoline, diesel… we’ll also have electrification. And there will be V-8s.”

The powertrain offensive will begin with a Cadillac-exclusive 3.0L twin-turbocharged gasoline V-6 for the all-new CT6 large sedan bowing at next week’s New York Auto Show. Designed to rival the vaunted Audi 3.0L supercharged V-6 and the BMW 3.0L turbocharged I-6, the Cadillac unit boasts 400 hp and 400 lb.-ft. (542 Nm) of torque.

It is the first 6-cyl. turbo to employ cylinder deactivation, GM says, and one of very few engines to use it in a dual-overhead-camshaft application.

GM, as well as Chrysler, uses the fuel-saving technology across its muscle-car, pickup and SUV lineups. But the engines in those entries always have been overhead-valve V-8s and never DOHC units because of the added complexity and cost. Put simply, a second camshaft means twice the hardware, hence twice the cost.

“We’ve been working on this for a number of years and we now have it at a level of refinement where we’re ready to go,” Leone tells WardsAuto at an event here to unveil the new 3.0L twin-turbo, as well as a redesigned 3.6L naturally aspirated V-6 and a pair of 8-speed automatic transmissions for use by Cadillac in the CT6 and elsewhere across the automaker’s portfolio.

“It’s expensive to do, it adds a measurable amount of cost, but it has a very reasonable benefit,” Leone adds. “We measure our fuel economy improvements in terms of dollars per gram of (carbon-dioxide emissions), or dollars per gallon improved, and it is a cost-effective way.”

Combined with stop-start technology, GM estimates a 6% improvement in fuel economy through the use of cylinder deactivation. On the 3.0L twin-turbo, two cylinders are deactivated during light-load situations, and Leone says the transition to 4-cyl. mode occurs without noise and vibration, another previous hurdle to using it in DOHC applications.

“We figured out a way to quietly engage and disengage the cams without any kind of disruption,” Leone says. “The transitions from four to six (cylinders) are really clean.”

While GM used the Audi V-6 as a benchmark for the Cadillac twin-turbo (the new 3.6L from the automaker was held up against Nissan’s 3.7L VQ V-6), engineers opted for turbos instead of a supercharger.

“They each have their benefits, but the twin-turbo is actually more responsive,” Leone says. “Instant response.”

GM boasts of near-zero lag from the Mitsubishi-supplied turbos and sustained peak torque between 2,500 and 5,000 rpm.

“Packaging was also a consideration,” Leone adds. “The CT6 has a big engine bay, so it could have probably handled either, but this engine is not limited to the CT6 in its lifecycle and some of those other environments would appreciate this package.”

Other key elements of the twin-turbo engine and shared with the redesigned 3.6L V-6 include an aluminum block, a forged-steel crankshaft, polymer-coated pistons and high-copper-content, sinter-forged connecting rods.

The engines employ direct injection from Hitachi and thousands of hours of computational analysis were used to optimize the combustion process.

A simpler timing drive system with cushioned chain sprockets lends quietness to the engine, and the oiling systems move the pumps inside the block for quieter operation. A 2-stage oil pump further enhances efficiency of the mills.

Both engines leverage the same basic architecture, although the twin-turbo unit adds a number of components to support the forced induction and its 86-mm bore specification measures about 10% smaller than the 3.6L. The engines share an 85.8-mm stroke.

The engines will be built at GM’s Romulus, MI, engine plant, which recently received a $540 million upgrade for the work.

The twin-turbo will mate to GM’s 8L90 8-speed automatic transmission used on the Chevy Corvette Stingray and the automaker’s trucks and SUVs, while the 3.6L V-6 receives an all-new 8L45 8-speed gearbox specially developed for the CT6.

The investment in Cadillac will result in eight new products by 2020 and put it in five segments in which it currently does not compete. It also accelerates a turnaround mounted for the brand more than a decade ago that was slowed by GM’s financial crisis and, more recently, a repositioning in the market.