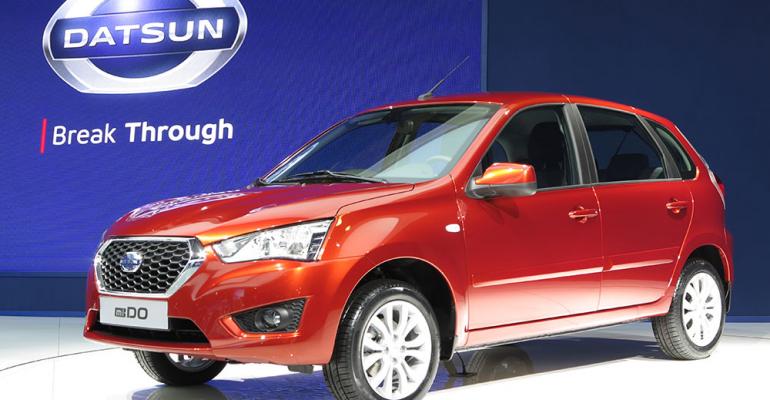 Nissan&rsquo;s revived low-cost Datsun brand, which is participating in the Moscow show for the first time, introduces its second model, the Datsun mi-DO.

VIENNA – New cars presented by the Renault-Nissan-AvtoVAZ alliance and the second-generation Chevrolet Niva concept are among premieres at this year’s Moscow auto show, which runs through the end of this week.

Lada manufacturer AvtoVAZ shows two significant concepts that are close to serial production. They are the first two new models unveiled after the Renault-Nissan Alliance acquired a majority stake in AvtoVAZ in June. Renault and Nissan now control 67.1% of a holding company that owns 74.5% of AvtoVAZ.

Visitors to the AvtoVAZ stand are getting their first glimpse of the Lada Vesta compact sedan. The car will be manufactured at OAG, AvtoVAZ’s second plant in Izhevsk, beginning in September 2015.

The Vesta is based on a new modular platform. The production car is expected to look almost identical to the concept.

Also on display is the Lada XRAY 2 concept, which is expected to go into production in early 2016 at AvtoVAZ’s main plant in Togliatti. The vehicle is based on the Renault Sandero, but has its own design with a CUV look.

Both the Vesta and XRAY 2 concepts are seen as the first step to reinventing the Lada brand. AvtoVAZ’s British design director Steve Mattin is using the X theme that connects the headlights, grille, lower air intake and front fog lamps as a significant design element. The X theme, featured at the 2012 unveiling of the Lada XRAY concept, can be seen in other parts of the new concepts as well.

Nissan’s revived low-cost Datsun brand, which is participating in the Moscow show for the first time, introduces its second model, the Datsun mi-DO. While the Datsun on-DO, a sedan unveiled earlier this year and already in production, is based on the Lada Granta, the mi-DO hatchback is derived from the Lada Kalina. Volume production is expected to launch before the end of 2014.

Both Datsun models share the assembly line with the Granta and Kalina at AvtoVAZ’s factory in Togliatti.

Deliveries of Datsun cars to Russian customers start this month. So far there are 25 dedicated Datsun dealers in key regions of the country with 75 more due over the next two years.

The automaker also shows the Nissan Sentra sedan, production of which is just starting at OAG in Izhevsk, and the Pathfinder, which is assembled at Nissan’s site in St. Petersburg. The Pathfinder also is available as a hybrid, the first to be built in Russia.

Assemblies of the new Pathfinder and Sentra push Nissan toward its target of 90% localized production in Russia by 2016.

Renault introduces the second-generation Sandero. While the first-generation Logan sedans and Sandero hatchbacks still are manufactured at Renault’s plant in Moscow, the new Logan and Sandero share the assembly line with the Lada Largus wagon and Nissan Almera sedan at AvtoVAZ in Togliatti.

However, the main attraction at Renault’s stand is the Renault Sport R.S. 01 race car making its debut in Moscow. With a carbon monocoque chassis for a weight of less than 2,420 lbs. (1,100 kg) and the Nismo 3.8L V-6 twin-turbo engine developing over 500 hp, it is able to reach a top speed of more than 186 mph (300 km/h). From 2015, Renault Sport R.S. 01 will be one of the stars of World Series by Renault in the new Renault Sport Trophy championship.

Another significant new car at the Moscow show is the Chevrolet Niva Next Generation Concept small SUV, which suggests how the second-generation Niva will look.

The Niva currently is manufactured by the GM-AvtoVAZ 50-50 joint venture in Togliatti. The JV is sourcing welded bodies from the neighboring AvtoVAZ factory. For the new Niva, GM-AvtoVAZ is building its own stamping and body shops.

‟The show car pays tribute to the true off-road character of the Chevrolet Niva produced since 2002,” GM-AvtoVAZ says in a statement.

The new Niva has been developed and built by a truly international team. Ondrej Koromhaz, an Australian citizen born in the former Czechoslovakia and now working for GM China in Shanghai, was the lead designer on the next-generation Niva exterior and interior. The show car for Moscow was built at GM Holden’s Port Melbourne, Australia, design center.

While the current Niva is powered by a 1.7L AvtoVAZ engine, the next generation will be equipped with a 1.8L gasoline powerplant producing 30% more torque. Paired with a 5-speed gearbox, the full-time all-wheel-drive SUV will come with a locking differential and a 2-speed transfer case. It will have high- and low-range gear settings, as does today's model.

Volume production of the new Niva originally was scheduled for December 2015, but Job One has been delayed to spring 2016.

Other debuts in Moscow include facelifted versions of the Peugeot 508 and locally assembled Toyota Camry. Daimler celebrates the world premiere of the Mercedes-Benz S 65 AMG Coupe and armored S 600 Guard models.

In addition to most global brands, showgoers can see 11 Chinese brands this year in Moscow. While nine brands already are sold in Russia, two newcomers officially are unveiled in Europe for the first time.

Great Wall shows its second Haval brand outside China for the first time. In China, Haval became independent in March 2013, thus bringing Great Wall into an era of dual branding with Haval and Great Wall.

In Russia, current Great Wall assembler and importer Irito Group will continue to sell Great Wall models, while the Haval brand will be distributed through an independent network starting late this year.

Prior to the Moscow show, Great Wall laid the cornerstone for a new Russian plant in the Tula region that will be dedicated for production of Haval vehicles.

Another Chinese newcomer is Hawtai Motor, which exhibits its Boliger SUV under the HTM brand. Contract assembler Derways already has begun local assembly of the vehicle in Cherkessk.

Chinese automakers are showing increasing interest in the Russian market. Sales of several new models have launched in Russia this year or will start soon, with some of the vehicles assembled in the country.