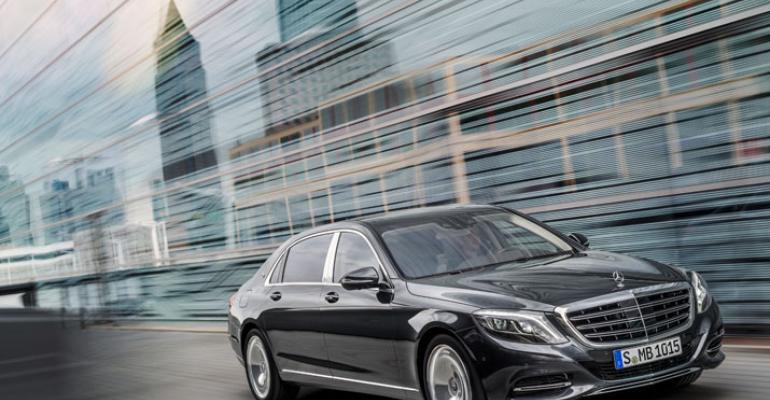 Luxury-Car Sales Numbers Small But on Rise in Russia

Sales have jumped in part because most luxury automakers and their dealers have refused to raise prices while also offering additional benefits and incentives for customers.

Their numbers are minuscule but sales of luxury cars in Russia are booming, despite the current stagnation of the overall auto market.

According to Russian Ministry of Industry and Trade data, luxury-car deliveries in the year’s first six month rose 95% from the same period a year earlier to 545 units. More than half, 285, were new Mercedes-Benz Maybach S-Class models.

Rolls-Royce deliveries climbed 40% during the period to 87, while Lamborghini was up 9%, to 12 units. Sales of  Bentley, Maserati and Porsche also increased.

Sales have jumped in part because most luxury automakers and their dealers have refused to raise prices while also offering additional benefits and incentives for customers.

According to Vagif  Bikulov, head of sales at Avilon Automotive Group, Russia’s leading dealer of luxury cars, demand has increased largely because of the continued devaluation of the ruble, allowing buyers to realize savings mostly in dollars and euros.

Sales also have been stimulated by pent-up demand and by most luxury automakers’ expansion of their Russian dealer networks, Bikulov says. Additionally, both automakers and dealers have begun offering long-term aftersales service, in some cases at no cost.

Some 20% of luxury cars in Russia are purchased by state agencies, state-owned companies and private businesses for corporate fleets. About 80% of sales in the year’s first half were made in Moscow, with St. Petersburg accounting for another 7%.

Ministry of Industry and Trade analysts say the increase in sales of the Mercedes-Benz Maybach S-Class could be explained by fulfillment of pent-up demand after a lengthy absence from the market and its relatively low price of RR7 million-RR9 million ($140,000-$180,000).

Ferrari and Aston Martin were the only luxury cars to see Russian sales decline this year, mainly because prices of both brands are not fixed in rubles.

The government analysts say price still remains the major determinant of luxury-vehicle sales. They predict sales will continue to grow in Russia, despite the country’s economic difficulties and a recent increase in the transport tax.