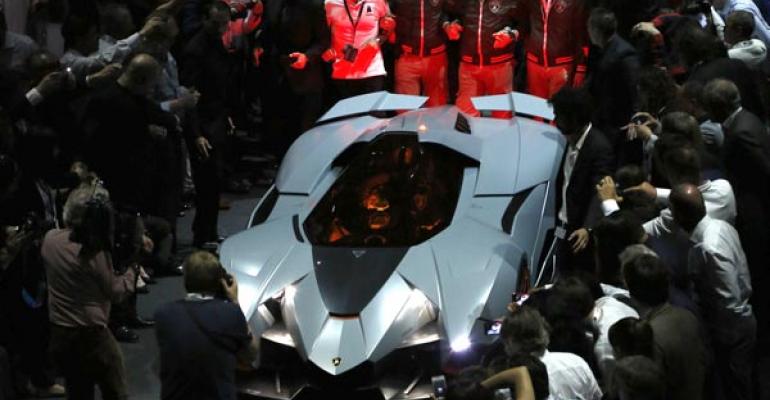 The car has all the makings of a being a futuristic concept only, with its center driving position, compact size, exotic materials and race-car DNA. But enthusiasts are hoping for a small production run just the same.

With the excuse that Lamborghini had to be celebrated in grand style for its 50th anniversary, the star designer of the entire Volkswagen Group has managed to return to the great old times of the Lamborghini Miura and of the dream cars of the ’60s and ’70s with the Egoista concept unveiled this week.

Some of those concepts of the past, such as the legendary Pininfarina Modulo, never made it to the road or track. But many others did become real drivable automobiles available for purchase by a privileged few.

However, among fully operational models, only Bertone’s Lancia Stratos was as futuristic as this ultimate one-off Lamborghini that money cannot buy – at least not yet.

Lamborghini President and CEO Stephan Winkelmann is positive, yet noncommittal, about the chance of even a single Egoista being built for a customer.

“If Lamborghinis are cars for the few, this one goes further,” he says. “It is a car for itself, a gift from Lamborghini to Lamborghini. The Egoista is pure emotion, which no one can ever possess, and which will always remain a dream, for everyone.”

Certainly, the Egoista belongs to the world of concept cars with its “guida centrale” (center driving position), much like Bertone Strato’s Zero and the Ferrari 365 P Berlinetta Speciale by Pininfarina, and its compact size, light weight and race-car DNA.

The name says it all for this single-seat supercar: Egoista is Italian for selfish.

“It represents hedonism taken to the extreme, it is a car without compromises,” de Silva says. “It's as if Ferruccio Lamborghini were saying: ‘I'm going to put the engine in the back, I don't want any passenger and I want it just for myself. And I want it as I imagine it to be.’”

De Silva says the mission simply was to create a super-sexy Lamborghini. “Lamborghinis have always been made with passion, and with the heart more than the head.”

In other words, while Ferraris favor progress through elegance and style, Lamborghini has had to appeal to a completely different buyer who is looking for spectacular rolling sculptures and loud engine music. In this respect the Egoista is entirely to the point, with its 600-hp 5.2L V-10 engine.

The cockpit, designed like a tailor-made suit for the driver, is a removable section inspired by the Apache helicopter and, once combined with the rest of the vehicle, creates a perfect technical, mechanical and aerodynamic unit.

The bodywork features high-tech materials, including aluminum and carbon fiber, and is marked with “no step” zones similar to an airliner. Its cab-forward design, rear-midship engine and curved silhouette give the car the appearance of a bull ready to charge.

Two rear flaps activate automatically at high speeds to increase stability, while a series of air intakes on the back of the engine hood help cool the powerful V-10.

The Egoista's lights are more like an aircraft's than a road vehicle, giving the vehicle the appearance of a 4-wheel UFO, even in the dark.

There are no traditional headlamps, but rather light-emitting-diode clearance lights positioned at various levels along the car’s surface. There are two white front lights, two red rear lights, a red flashing light in the upper part of the tail, two orange bull's eyes as side markers and two lights on the roof, red on the left and green on the right.