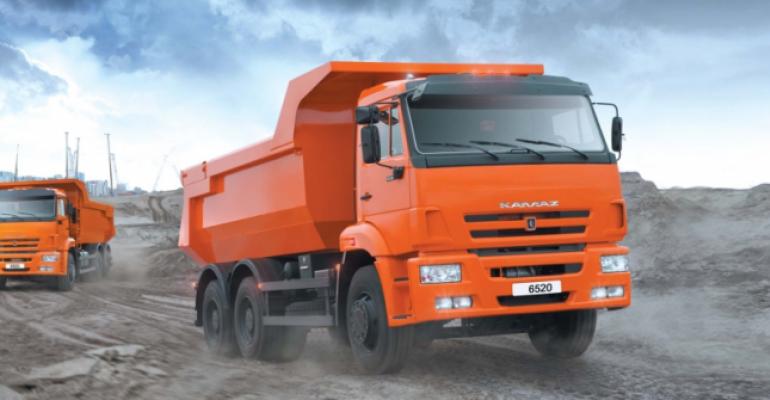 Driving the cutbacks in both investment and production is a 40% decline in year-to-date sales from like-2014.

ST. PETERSBURG – Russian truck manufacturer Kamaz will cut investment in its 2020 development program by half, but some projects, including an autonomous truck, will be spared.

The company plans to raise the funds with bonds expected to be purchased by Russian state banks.

Driving the investment cutback is a steep decline in sales that has seen deliveries year-to-date tumble 40% from like-2014 to 10,800 units, Kogoghin says.

Analysts with the Russian Ministry of Industry and Trade predict the country’s heavy-truck market will decline 45% to 50% this year compared with 2014, when an estimated 85,000-88,000 units were sold. Kamaz’s market share was 23%.

Kamaz is not abandoning its key investment projects, however. The truck maker is reducing costs and plans to borrow additional funding from Russian banks, obtain expanded loan guarantees from the government, establish joint ventures with suppliers and take advantage of the weak ruble by increasing global exports, which in recent years have become more profitable than domestic sales.

The investment cuts probably will not affect development of an autonomous truck in cooperation with Cognitive Technologies, one of Russia’s leading designers of IT solutions.

The truck, which the partners hope to put into production by 2025, is designed to operate in most weather conditions and recognize pedestrians, other vehicles and obstacles on the road.

Daimler May Up Kamaz Stake to Secure Foothold in Russian Market
Jul 16, 2013