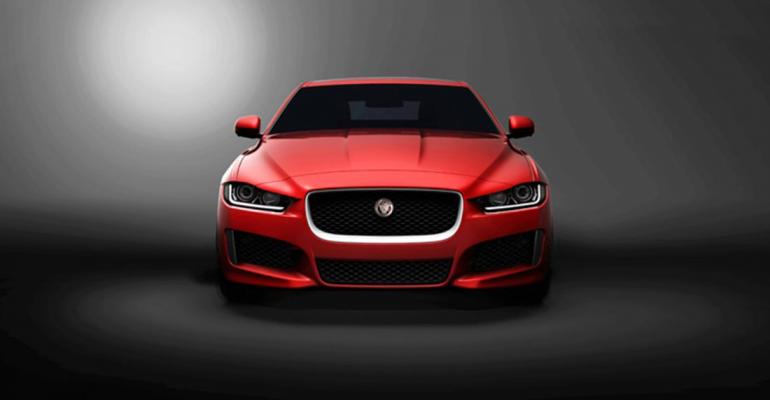 The Jaguar XE is the first car in the world to use a new grade of high-strength aluminum called RC 5754, which features a high percentage of recycled metal.

TURIN – Jaguar decides not to wait for the Paris auto show in October for the official unveiling of its all-new midsize XE sedan, choosing Sept. 8 and London for the car’s world debut.

The XE, aimed against such competitors as the BMW 3-Series, marks the first entry in its segment to feature an aluminum-intensive unibody, with the lightweight metal for 75% of the car’s structure.

The new architecture was unveiled at last year’s Frankfurt auto show, but it underpinned a CUV concept, the C-X17, rather than a sedan.

The XE’s modular platform is the fifth generation of body structures developed by Jaguar applying its own bonded-and-riveted aluminum technology inspired by aerospace applications. The weight to stiffness ratio achieved “ensures that the XE is the most fuel-efficient Jaguar yet,” the automaker says, with fuel consumption and carbon-dioxide emissions of 75 mpg (3.1 L/100 km) and less than 100 g/km, respectively, on the European driving cycle.

The use of aluminum “gives us a body structure with unrivalled low weight: it’s light but also immensely strong with extremely high levels of torsional stiffness,” says Mark White, chief technical specialist-Lightweight Vehicle Structures. “We’ve made sure our aluminum-intensive body structure exceeds all global safety standards without compromising on vehicle design or refinement.”

The Jaguar XE also is the first car in the world to use a new grade of high-strength aluminum called RC 5754, which was developed specifically for the car. The new alloy features a high level of recycled metal and makes a significant contribution to Jaguar’s goal of using 75% recycled material by 2020.

Another first for the new Jaguar is the Ingenium family of lightweight, low-friction, low-emission 2.0L 4-cyl. gasoline and diesel engines built in a new plant that will supply both Jaguar and Land Rover.

The full engine lineup will enable Jaguar to offer vehicles with class-leading performance. The automaker says the powerplants will achieve CO2 emissions lower than 100 g/km and reach top speeds above 186 mph (300 km/h).

The car will offer either rear- or all-wheel drive.

As for the look and style, Jaguar's design director, Ian Callum, is committal.

“The new Jaguar XE is every bit a modern Jaguar; more compact in size but visually striking. Practical and yet premium,” he says. “We never forget we are designing a Jaguar, and that means it must be as exciting to look at and drive as it is brilliant to run and practical to own. We believe we've done just that with the Jaguar XE.”

Production is expected to start late this year and the car should be in global markets by mid-2015.