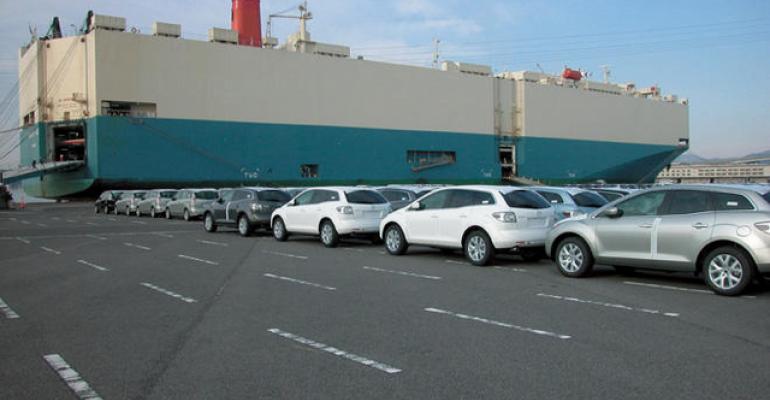 While American automakers may cheer the agreement&rsquo;s provisions for gradual lifting of Japanese tariffs on U.S. autos, they are quick to point out these free-trade benefits risk being outweighed by currency manipulation.

The conclusion of negotiations for a Trans-Pacific Partnership agreement this week is being met with concern among automakers in North America, but approval in Japan.

It goes far beyond the usual tariff-reduction goals of traditional trade pacts. Additional measures call for greater transparency and liberalization in foreign investment rules. This includes provisions for neutral and transparent international arbitration of investment disputes. Commitments on trade facilitation require that TPP countries agree to publish their customs laws and regulations, and release goods without unnecessary delays.

TPP signatories also have agreed to consult openly on proposals for technical regulations that have to be followed by importers, exporters and local producers alike. And TPP countries have agreed to open immigration procedures for temporary business visitors.

But when the Obama Admin. goes out prospecting for allies in its quest to ensure ratification in Congress, it may do better to spare its breath in pitching U.S. automakers.

Under the fast-track Trade Promotion Authority it granted the president in June, Congress has 90 days to take an up-or-down vote on TPP, giving it the power only to accept or reject the deal but not enact amendments. Given that this schedule moves a TPP vote back to 2016 at the earliest, fears the agreement may fall victim to U.S. presidential election politics have surfaced.

While American automakers, who currently export about $140 billion of vehicles and parts throughout the world, may have reason to cheer the agreement’s provisions for gradual lifting of Japanese tariffs on U.S. autos, for example, they are quick to point out these free-trade benefits risk being outweighed by currency manipulation.

“To ensure the future competitiveness of American manufacturing, we recommend Congress not approve TPP in its current form, and ask the administration to renegotiate TPP and incorporate strong and enforceable currency rules,” says Ziad Ojakli, Ford group vice president-government and community relations.

The American Automotive Policy Council points out the Japanese yen has lost 71% of its value against the U.S. dollar since Oct. 1, 2012, a trend that has kept U.S. manufacturers at a disadvantage, particularly as the dollar strengthens.

‟While the AAPC has supported every past U.S. free-trade agreement, it is seeking as a priority a TPP that includes strong and enforceable currency disciplines,” the group says.

On the other hand, the Association of Global Automakers, a group that includes companies, both foreign and domestic, that sell cars in the U.S. gives the deal a thumbs-up, saying TPP “will provide new opportunities to increase exports and support American jobs.”

In addition, concerns have been raised across North America about a TPP reducing the local-content threshold that has applied under NAFTA from 62.5% of a vehicle’s net cost to 45% for autos to gain TPP market access. And in the future these parts can come from any TPP country and not just Canada, the U.S. or Mexico as under NAFTA.

Canada’s Automotive Parts Manufacturers’ Assn. notes this development has split opinions of its members: “These new reasonable terms will have varying effects on Canada’s automotive parts manufacturing,” it says.

“On one hand, prospects to supply vehicle assembly in foreign markets will open for large Canadian suppliers with multinational footprints and access to mobile capital. On the other hand, small- and medium-sized suppliers to Canada’s vehicle-assembly supply chain will face new competitive pressure from large, multinational firms from TPP countries and further abroad.”
This sentiment is echoed by the Automotive Industries Assn. of Canada. Its president, Jean-François Champagne, says while the organization recognizes the importance of trade treaties, it is unsure of the direct impact the TPP will have on AIA and its members.

While some members see it as a positive development, others “have expressed concerns over the lack of information made available to the public and to the industry, and the potential risk of sub-quality auto parts being brought into Canada,” Champagne says.

By contrast, Japan’s auto sector is overwhelmingly pleased that the 12 countries negotiating the Trans-Pacific Partnership were able to solve last-minute disputes that delayed agreement over the weekend, including auto issues.

For Japanese manufacturers, one of the most important elements of the deal was the U.S. agreeing to gradually lower its 2.5% tariff on Japanese automobiles 15 years after the agreement takes effect. The tariff is to be halved by 20 years and eliminated entirely by 25 years.

‟We welcome and applaud the announcement,” says Masami Tanaka, head of the international department of the Japan Automobile Manufacturers Assn.

“It is too early for us to comment with any certainty on the impact of this agreement, but it will clearly make trade easier for our member companies and allow them to explore new opportunities in new or existing markets,” Tanaka tells WardsAuto.

Canada’s commitment to abolishing tariffs may be of special interest to Japanese automakers, he suggests, although many Japanese manufacturers produce vehicles in TPP markets where they are sold, including the U.S. and Canada, already easing the impact of North American tariffs.

In a statement, Toyota says it is “confident that this agreement regarding the TPP will contribute to the further development of free trade.”

JAMA also stresses U.S. manufacturers will benefit from the arrangement as well, as they purchase large amounts of components from Japan. “And if Ford and (General Motors) vehicles become cheaper, that’s good for the consumer as well,” Tanaka says.

The deal’s easing of content rules (compared with NAFTA’s) gives Japan’s auto industry a freer hand to source parts from other parts of Asia, including from plants in countries that are outside the TPP zone, such as China, on vehicles sold in North America.

In the European Union, ACEA is awaiting the final text of the agreement, which may be released within two weeks. A spokeswoman says the European automakers group may comment once it has seen “what the actual content of the deal is.”

Calling the deal’s conclusion “a significant step towards trade liberalization,” director general Markus Beyrer says: “With the conclusion of TPP we are now confident the EU might be closer to conclude ambitious (trade) agreements with Japan and the U.S.,” such as the Trans-Atlantic Trade & Investment Partnership.

“The conclusion of TPP,” he says, ‟puts additional pressure on the EU to speed up its trade agenda to ensure European companies will be able to take advantage of market opportunities in developed and developing countries in one of the fastest-growing regions in the world.”

– with Ed Zwirn in New York, Julian Ryall in Tokyo, Mandy Kovacs in Ottawa and Sara Lewis in Brussels