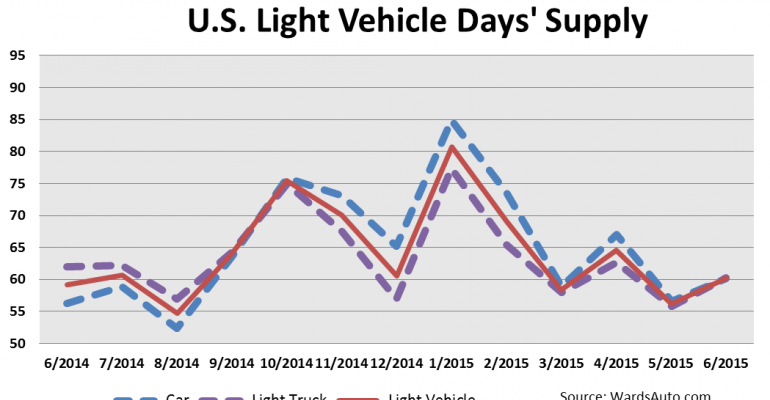 Rising availability of CUVs and vans pushed June 30 U.S. light-vehicle inventory above the same year-ago total for the first time since October.

The higher CUV and van inventory mostly resulted from increases in import models, especially in the Small and Small Luxury CUV segments.

Much of the higher import volume is due to better availability of CUVs and Small Vans.

CUV import inventory was up 38% from year-ago, accounting for 6.7% of dealer stocks, compared with 4.5% in June 2014. Of that, Small CUVs, including luxury versions, were up 103% thanks to new vehicles such as the Audi Q3, Fiat 500X, Jeep Renegade and Mercedes GLA, plus Chevrolet Trax, which is dual-sourced from North America and South Korea.

Other strong sellers among small CUVs with higher inventory include the Buick Encore, Kia Sportage and Subaru XV Crosstrek.

Overseas shipments of Small CUVs could get heavier later this year when the new Mazda CX-3 and redesigned Hyundai Tucson begin deliveries and Honda adds overseas sourcing for its new HR-V.

Inventory of all CUVs was up 14.6% from year-ago, not far off from the 13.1% year-to-date sales increase the group recorded through June. The higher inventory is in line with forecasted demand, and July-September is normally the highest volume quarter for CUVs.

Although a small portion of the market, inventory of import Small Vans was up 91% from year-ago, including big gains from the new Ram ProMaster City and recently redesigned Ford Transit Connect and Kia Sedona.

Following indications in May and June’s sales results that growth of big trucks might be peaking, combined inventory of large CUVs, pickups, SUVs and vans, including luxury models, was down 9.4% from year-ago. Furthermore, June’s inventory total for the group slid by an even bigger 12.0% from May, which was somewhat surprising given last month’s sales for the big trucks were down 4.4% from same-month 2014.

The biggest segment in that group, Large Pickups, ended June with inventory 13.6% below year-ago. That, in part, is due to Ford still not having full availability of its ’15-model F-150, but stocks for the segment, less Ford, were still down 8.5%.

Cars, which continued a sales slide in June, ended the month with inventory down 1% from year-ago.

Despite a lot of production cuts, inventory for several vehicles in the Small and Middle Car groups remain higher than necessitated by demand, which could mean more cuts, or some increased retail or fleet inducements to further skim inventory.